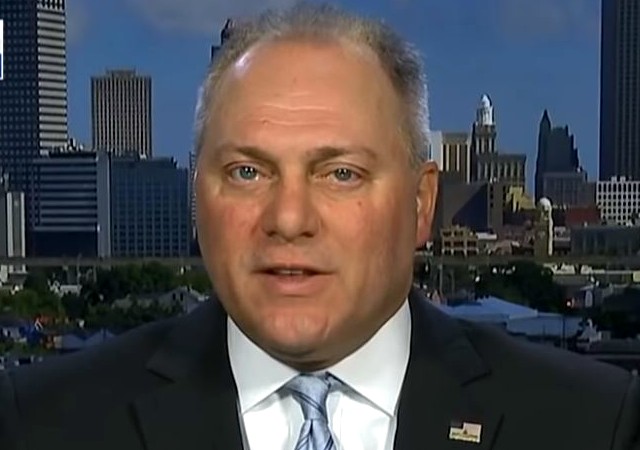 Posted by Mary Chastain on April 01, 2020 42 Comments
The Kennedy Center decided to lay off staffers and not pay the musicians after April 3rd despite receiving $25 million in the Wuhan coronavirus bill. House Minority Whip Steve Scalise came out in support of a bill to take back the money while slamming Speaker of the House Nancy Pelosi over her pet projects.
Read More

Posted by Mike LaChance on February 21, 2020 13 Comments
One of the topics that came up during the Democrat debate on Wednesday night was the behavior of Bernie Sanders' supporters on the internet. So called "Bernie Bros" have earned a reputation for going after critics of Sanders and not always in a nice way.
Read More 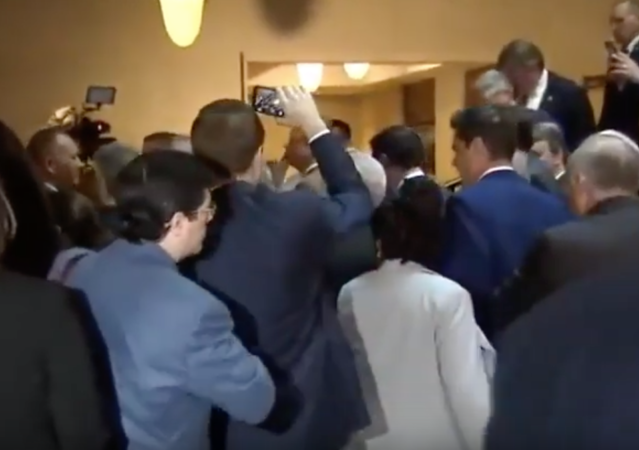 Posted by Stacey Matthews on September 30, 2019 43 Comments
After House Speaker Nancy Pelosi gave her public blessing last week for House Democrats to launch a formal impeachment inquiry of President Trump, members of the GOP House leadership read her the riot act. Not only did she announce her support of an inquiry before reading the transcript of the Trump/Zelensky call (which hadn't even been released at the time), but she also didn't name the specific alleged impeachable offense Trump committed.
Read More 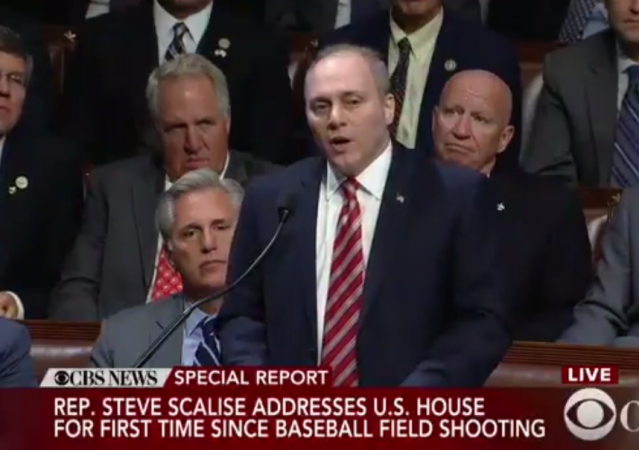 Posted by Kemberlee Kaye on August 03, 2018 6 Comments
Thursday, New York authorities arrested a man accused of leaving threatening voice messages for Rep. Steve Scalise. According to The Times-Picayune, the voice message said, "We are going to feed them lead. Make no mistake you will pay."
Read More

Rep. Scalise Welcomed Back to Congress With Standing Ovation and a Speech That Will Leave You in Tears

Posted by Kemberlee Kaye on September 28, 2017 10 Comments
After suffering a critical gun shot wound to the hip during a June Congressional baseball practice, Rep. Steve Scalise returned to Congress Thursday. As disheartening as the events leading to his months-long absence were, his return was nothing short of inspirational.
Read More 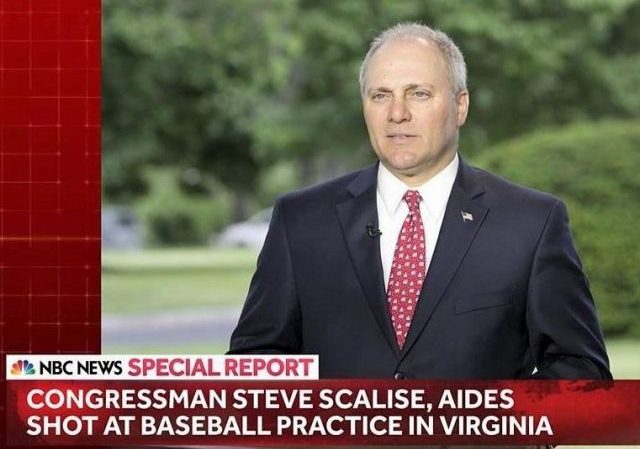 Rep. Scalise Heads Back to Congress After Being Shot 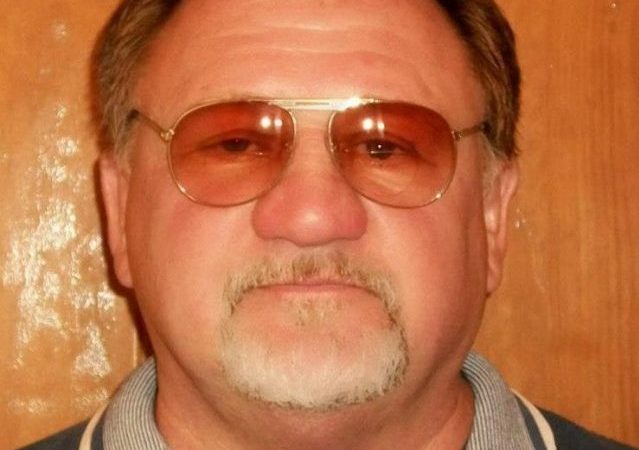 Posted by Mike LaChance on July 09, 2017 16 Comments
The Washington Post has fallen almost as far as CNN. In a news analysis article, the paper tries to shift blame for James Hodgkinson's attempt to murder Republican congressmen on conservative talk radio. It's an established fact that Hodgkinson was a Bernie-loving, anti-Trump, Rachel Maddow "super fan," so wouldn't it make more sense to blame MSNBC?
Read More

Posted by Mary Chastain on June 23, 2017 12 Comments
Nebraska Democratic Party Chair Jane Kleeb has ousted Phil Montag, a volunteer for the party's technology committee, after a recording surfaced of him saying he was glad House Majority Whip Steve Scalise was shot and wished he died. Scalise and four others were shot last week while practicing for the congressional baseball game. From The Omaha World-Herald:

On Thursday, Kleeb acted immediately upon hearing the recording. “This is the first I am hearing this,” Kleeb said by email Thursday morning. “As soon as I heard it, I sent it to the (party) officers and then sent an email to Phil Montag informing him I am removing him from his appointed position as Co-Chair of the Technology Committee. ... Wishing a Member of Congress or any individual dead is disgusting and has no place in our party.” 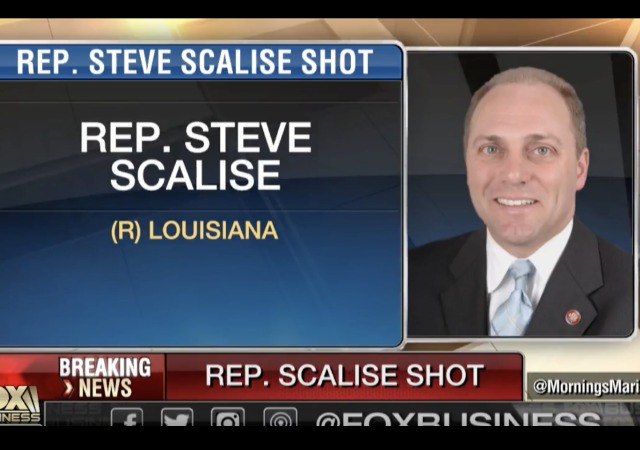 Democratic Socialists at U. Georgia Investigated for Tweet Advocating Violence 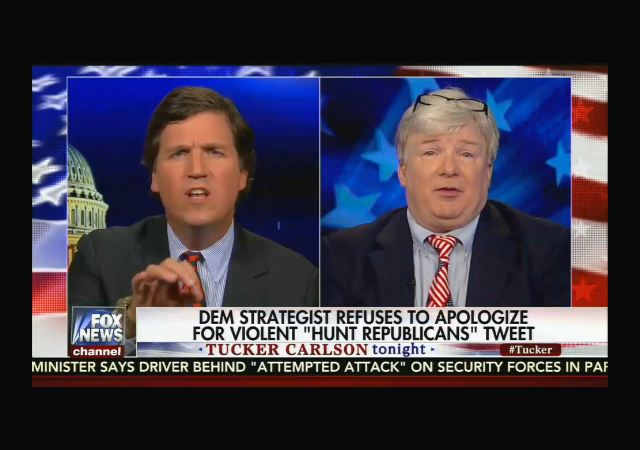 Posted by Mark Finkelstein on June 20, 2017 40 Comments
James Devine—the Dem strategist who tweeted #HuntRepublicanCongressmen in the hours following the shooting of Republican Congressman Steve Scalise—was a guest on Tucker Carlson's Fox News show last night. Devine's rambling and confused argument ultimately led Tucker to tell Devine that he is an "unbalanced person." But listen carefully to what Devine said, and you'll detect what amounts to his justification of the Scalise shooting. He first quotes Sen. Rand Paul [whom Devine twice calls "Paul Rand"] to the effect that the purpose of the Second Amendment is to permit people to "shoot at a tyrannical government."
Read More

"driven by Trump and trumpism to try to kill people.”... 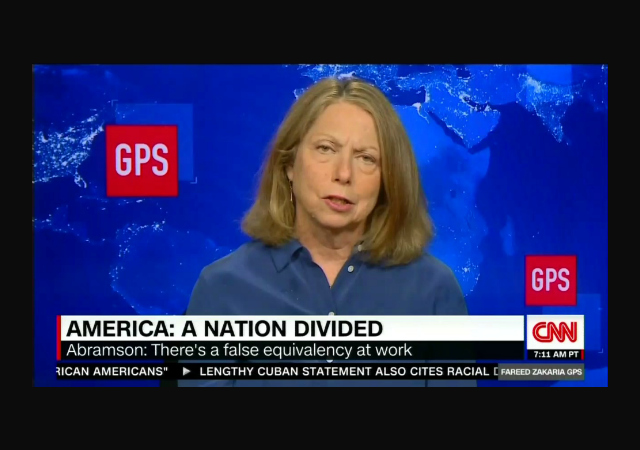 Posted by Mark Finkelstein on June 18, 2017 82 Comments
In the wake of the Scalise shooting, Fareed Zakaria hosted a segment on his CNN show this morning devoted to addressing how Republicans and Democrats can stop their "internecine struggle" and "reconcile." Two of the guests bought into the premise, discussing the challenges involved and possible approaches to reconciliation. But the third guest, Jill Abramson, who was fired in 2014 as executive editor of the New York Times, was having none of the kumbaya. To the contrary, she decried a supposed "false equivalency" between Democrats and Republicans. Abramson put the blame on Republicans for the divisive political climate and accused them of "benefiting from a kind of rage machine that operates in this country."
Read More 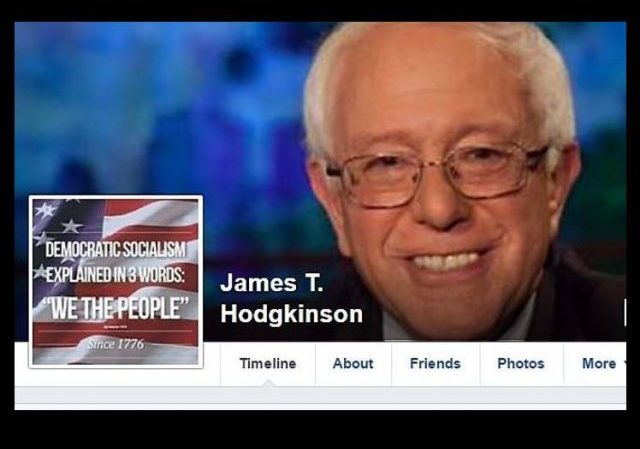 Why Are Bernie Bros So Angry?

Larry Elder explains: "People who want equal results feel that things have been taken from them, they're owed something"...

Posted by William A. Jacobson on June 16, 2017 45 Comments
Well that was quick. I can't recall as substantial an assassination attempt against one political party as took place Wednesday morning, June 14, 2017. Certainly there have been individual assassinations and shots fired, such as by Puerto Rican nationalists in 1954, but this was a well planned attempt at mass murder directed against one party. Our prayers are with all the victims, particularly Steve Scalise, who remains in critical condition. But for the chance that Capitol Police officers were assigned to protect Scalise because of his House leadership position, we might be burying dozens of people.
Read More 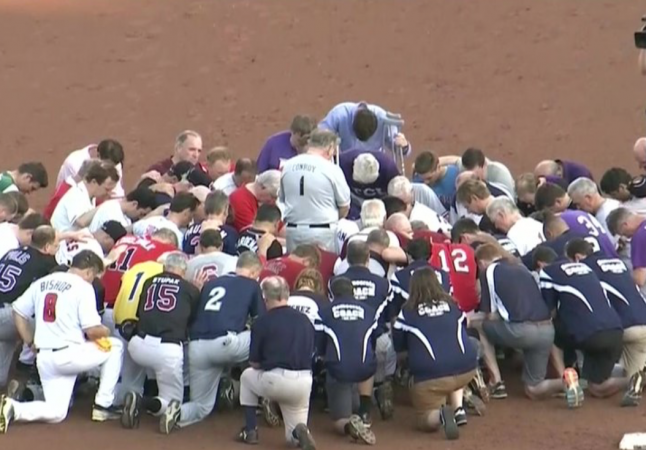 Posted by Kemberlee Kaye on June 16, 2017 9 Comments
The Congressional Baseball game is a 108-year-old tradition and one of the best annual showings of bipartisanship. This year, a day after Rep. Steve Scalise was shot and severely injured during baseball practice, a public display of unity and civility was desperately needed. And that's exactly what happened.

Before the game began, both Republican and Democrat teams held a moment of silence and prayer at second base, where Rep. Scalise was supposed to play