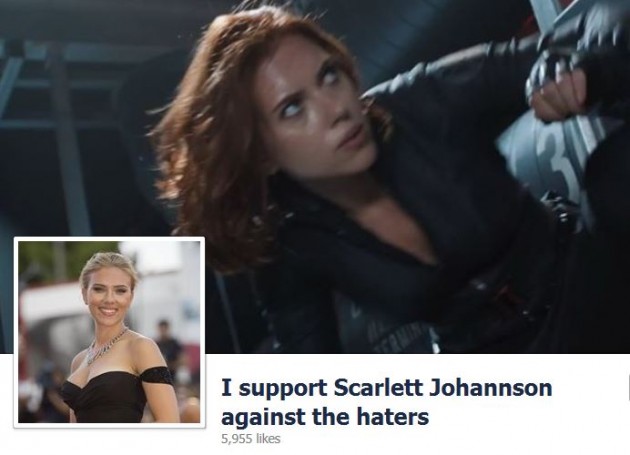 I support Scarlett Johannson against the haters

Posted by William A. Jacobson on February 01, 2014 21 Comments
She stood up to the BDS bullies. She likely will come under increasing attack and boycotts directed at her. She deserves our support. Someone started a Facebook support page called I support Scarlett Johannson against the haters.  It would be good to increase the number of "Likes" and for people to share the page. Brendan O'Neill at The Telegraph has a brilliant take on the situation, Three cheers for Scarlett Johansson's stand against the ugly, illiberal Boycott Israel movement:

Ever since she was signed up as the face of SodaStream, Ms Johansson has had a tsunami of flak from campaigners who think that buying Israeli stuff, working with Israeli academics or attending Israeli theatre performances is the very worst thing a human being could ever do. You know the kind: they stand outside Marks & Spencer’s on Oxford Street warning all whom enter that this evil shop sells blood-stained products (ie, stuff made in Israel), and they screech and wail, these philistines for Palestine, when an Israeli violinist starts playing at the Proms. I mean, can you imagine it – a musician from Israel inside the Royal Albert Hall? *Shudder*. .... And then, brilliantly, totally stealing Oxfam’s puffed-up thunder, Ms Johansson’s people issued a statement saying: “Scarlett Johansson has respectfully decided to end her ambassador role with Oxfam after eight years.” Sassy Actress 1, Self-Important Moaners About Israel 0....