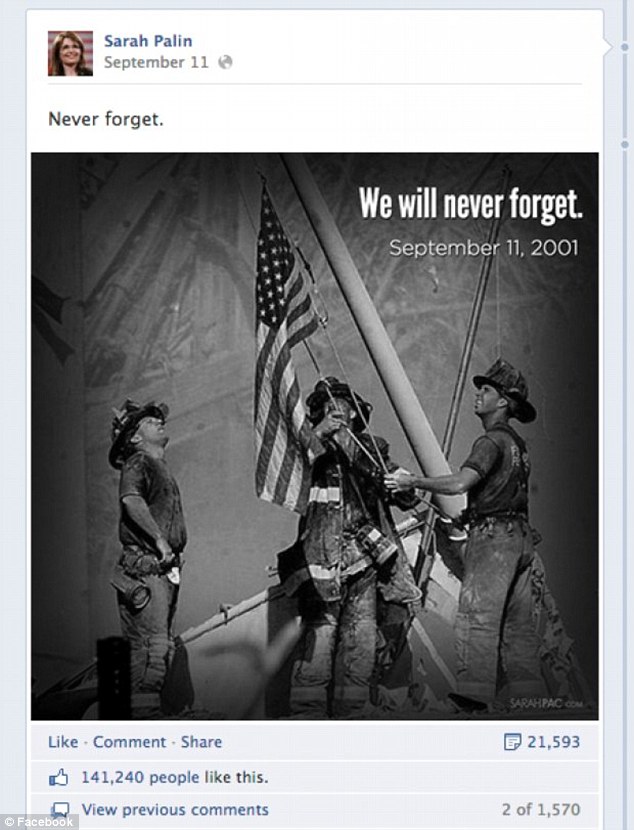 Another media meme is created. Plus -- some legal lessons....

Yesterday, Sean Sullivan at Chris Cillizza's The Fix column at The Washington Post ran the following paragraph in a story titled 5 moments that show why Margaret Thatcher mattered in American politics: 5) Spurning Sarah Palin: In 2011, the Guardian newspaper reported that Thatcher would not be meeting...

Sarah Palin once again proved that her political instincts far surpassed those of the Republican political establishment, which long has accepted Don Young, Alaska's lone Congressman. Elected in 1973, Young has come to epitomize what is wrong with Washington, with questionable use of campaign funds and...

Not long ago Politico's Maggie Haberman ran an anti-Palin opinion piece masquerading as news analysis, Sarah Palin’s next act: Candidate or ‘Kardashian’? I addressed that false choice in my post, Politico’s next act: Real News Organization or Gawker (no offense to Gawker), noting that Palin had backed numerous successful Republican...

Just yesterday the dimwits at Politico were writing her off in their usual demeaning terms. I don't expect she'll be a candidate again, but today she took CPAC by storm, playing an important role outside the Republican Party structure in saying what needs to be said...

Politico’s next act: Real News Organization or Gawker (no offense to Gawker)

Sarah Palin has taken to twitter to further confuse and confound what she has termed the "idiot media," no doubt including Washington Post journalist Suzi Parker who erroneously reported that the former Governor would be joining Al Jazeera. The Washington Post's Suzi Parker had failed to...

Ted Cruz thanks Sarah Palin and her supporters

Dated January 11, 2013 (h/t gs in the Tip Line): Dear SarahPAC Supporter, Together, we made history this November! Our victory in the U.S. Senate race in Texas was a remarkable testament to the conservative grassroots. We started out as underdogs in a long, competitive primary. But despite the...

Palin (not) at Republican National Convention

There seems to be an unusual lack of clarity here, as Ed Morrissey notes in a post earlier this afternoon. Various news reports indicate Palin will not be giving a speech, but it's unclear if she was not invited to speak, given such a poor time...

Palin stops at Chick-fil-A, left responds with misogyny and sexism

Posted by William A. Jacobson on July 28, 2012 85 Comments
My post earlier today, Sarah Palin visits Chick-fil-A, civility and new tone ensue on Twitter, has generated a fair bit of attention. The tweets highlighted in the post were not even the worst of them. As has become typical when Palin is attacked from the left, the attacks quickly become mysogynistic, sexualized, and sexist, with the "C" word liberally thrown in by women as well as men. Here are some more samples of the sea of profanity and vitriol, so you realize (which you already do, I know), we are dealing with:

Forgive my language but @sarahpalinusa is a Cunt Fil-a. A waste of space. Wht a horrible excuse for a Christian and American.

I stopped there once to throw up Taco Bell. RT @SarahPalinUSA: Stopped by Chick-fil-A in The Woodlands to support a great business.

cool! make sure to kill yourself after, you bigoted wench. RT @SarahPalinUSA Stopped by Chick-fil-A to support a great business.

@SarahPalinUSA eat up. hopefully next year you'll die from it.

@SarahPalinUSA and this is why no one likes you you dumb bitch! #supportgaymarriage

@SarahPalinUSA why has a wolf not shot you yet?

@SarahPalinUSA You are so stupid, and your daughter is an uneducated rhino. #JustNeededToGetThatOutThere

@SarahPalinUSA I hope someone gave you "special sauce".

Yeah I admit it, I'm a hater, I really hate @SarahPalinUSA, she in an evil disgusting bigoted bitch

After Sarah and Todd Palin attended a rally for Ted Cruz in Texas yesterday, they stopped by a Chick-fil-A. Palin posted photos on her Facebook page and also sent out tweets about the visit (h/t Charles). Stopped by Chick-fil-A in The Woodlands to support a great business....

Sarah Palin attended a rally with Ted Cruz and Jim DeMint yesterday in Woodlands, Texas. Reader duchess of kitty attended, and sent this report, video and photo: This was just one of the many “Get Out The Vote” rallies the Tea Party (the TX Tea Party as well as the...

McCain: Sarah Palin was “better candidate” than Romney, others

Senator John McCain chose Sarah Palin as his VP in 2008 because she was a "better candidate" than Romney, Pawlenty, or any of the others under consideration. McCain made the remarks Tuesday after being asked if Mitt Romney's tax returns were the cause of him choosing...

I'm not there this weekend, but at least we have video! ...

Palin’s support for Orrin Hatch is not new

The big news last night was that Sarah Palin endorsed Orrin Hatch (video via HotAir): Many people are acting surprised.  But Palin's support is not new, as this video from August 2011 indicates, although calling it a formal "endorsement' may be new: I set forth my position...

Definitely a contender. Sarah Palin on the Secret Service agent who checked her out: "Well, check this out bodyguard, you're fired, and I hope his wife kicks his okole and sends him to the dog house long as he's not eatin' the dog along with his former boss." Multiple...

A post at Bookroom Worm exploring the attacks on Ann Romney is getting a lot of attention: This transcends Leftist feminist sensibilities and touches upon a core issue in statism — namely, who raises the children? ...

Depends on the meaning of “the rights of women everywhere”

Hilary Rosen last night: Ann Romney "has never worked a day in her life." Hilary Rosen September 4, 2008: And what about the argument that [Sarah Palin] is a negligent mother who will be distracted from her important role? I am a mother who constantly feels the pressure from others about...