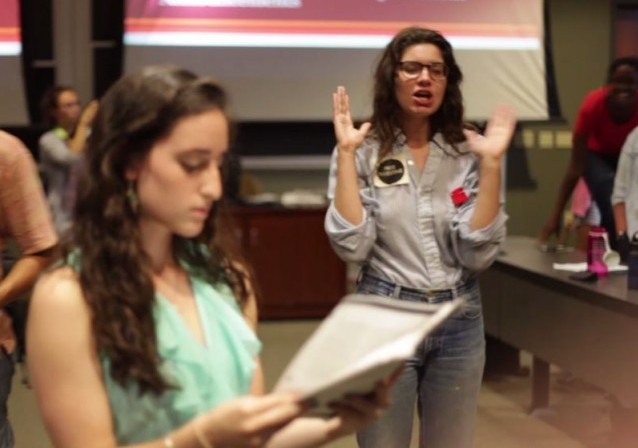 Posted by William A. Jacobson on July 06, 2015 16 Comments
Frank Luntz recently conducted polling of American "opinion elites" attitudes toward Israel. The results, but not the data, were published in an article by David Horvitz, Editor in Chief of The Times of Israel, Israel losing Democrats, ‘can’t claim bipartisan US support,’ top pollster warns:

Three quarters of highly educated, high income, publicly active US Democrats — the so-called “opinion elites” — believe Israel has too much influence on US foreign policy, almost half of them consider Israel to be a racist country, and fewer than half of them believe that Israel wants peace with its neighbors. These are among the findings of a new survey carried out by US political consultant Frank Luntz. Detailing the survey results to The Times of Israel on Sunday, Luntz called the findings “a disaster” for Israel. He summed them up by saying that the Democratic opinion elites are converting to the Palestinians, and “Israel can no longer claim to have the bipartisan support of America.” He said he “knew there was a shift” in attitudes to Israel among US Democrats “and I have been seeing it get worse” in his ongoing polls. But the new findings surprised and shocked him, nonetheless. “I didn’t expect it to become this blatant and this deep.”

Read the rest of Horvitz's article for more details. The article created huge concern in pro-Israel circles, and delusional euphoria among Israel haters. But is the sky really falling on Israel? I have written a response, published in The Times of Israel.
Read More

Posted by Mike LaChance on May 29, 2015 21 Comments
If you were paying attention to American politics in 2008, you couldn't escape from the viral Obama "hope" poster created by Shepard Fairey. His simple image became a symbol of the junior senator's presidential campaign and was proudly displayed by Obama supporters on Facebook. Unfortunately for Fairey, his love of Obama was doomed to wither on the vine. Adam B. Lerner of Politico:

'Hope' poster artist Shepard Fairey says Obama let him down Shepard Fairey, the street artist behind the famous “Hope” poster that went viral during Barack Obama’s historic 2008 presidential run, said that the president has not lived up to his expectations. In an interview with Esquire, Fairey acknowledged that “Obama has had a really tough time” but said he’s “not even close” to having lived up to the “Hope” poster created for him. “I mean, drones and domestic spying are the last things I would have thought [he’d support],” Fairey added in the interview, posted Thursday. He tempered his response saying that he’s met the president a few times and that he thinks he is a “quality human being,” adding that his presidential record has been largely dictated by things out of his control. “I’m not giving him a pass for not being more courageous, but I do think the entire system needs an overhaul and taking money out of politics would be a really good first step,” Fairey said.

That's funny. I remember when Democrats touted Obama's fundraising prowess as proof of his ability to be president. Don't worry, Shepard. I'm sure Hillary Clinton will get big money out of politics. (Pun intended.)
Read More 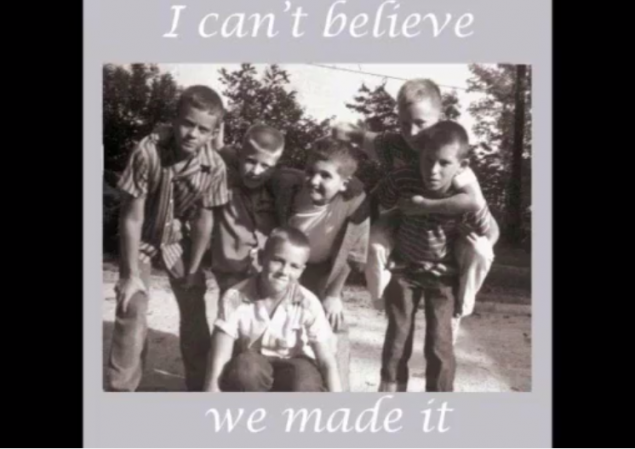 If you are reading this, congratulations, you made it 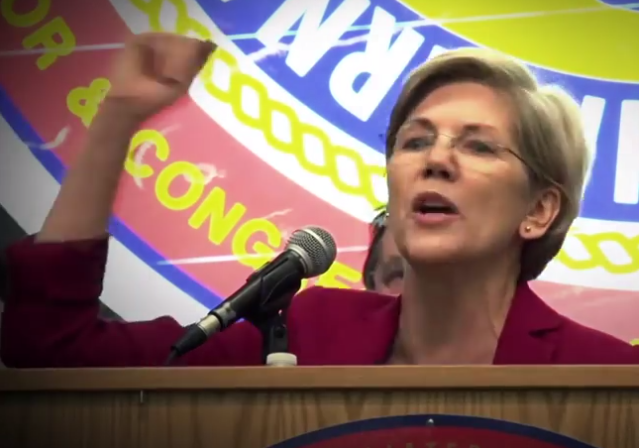 Posted by William A. Jacobson on December 13, 2014 39 Comments
Forget the polls. Forget. The. Polls. The Democratic nomination for president is Elizabeth Warren's for the asking. If that wasn't the case two weeks ago, it is now after Warren's performance trying to kill CRomnibus because of a rider scaling back a part of the Dodd-Frank financial scheme. It doesn't matter if Warren is right or wrong. She's doing something. She's leading. Where has Hillary been? Seriously, is Hillary any place to be found? The headlines are all Liz Warren, all the time, and she's getting the positive treatment for risking a government shutdown that Ted Cruz and Republicans never will receive. Danny Vinik at The New Republic declares this The Week Elizabeth Warren Decided to Run for President:

We won’t know for a few months whether the Massachusetts senator will challenge Hillary Clinton for the Democratic nomination, but if she chooses to run, we’re going to look back at this week as a pivotal moment in Warren’s decision-making.... This doesn’t mean that she will run. On Tuesday, her press secretary said, "As Senator Warren has said many times, she is not running for president." But note the present tense—Warren could still run in the future.

Team Obama, or more precisely, Team Obama operatives, are lining up behind Warren:

In an open swipe at Hillary Clinton, more than 300 operatives from President Obama’s 2008 and 2012 campaigns are urging the lefty Massachusetts senator to challenge Clinton for the 2016 Democratic presidential nomination. Their “Ready for Warren” site posted a letter Friday signed by the ex-Obama staffers. 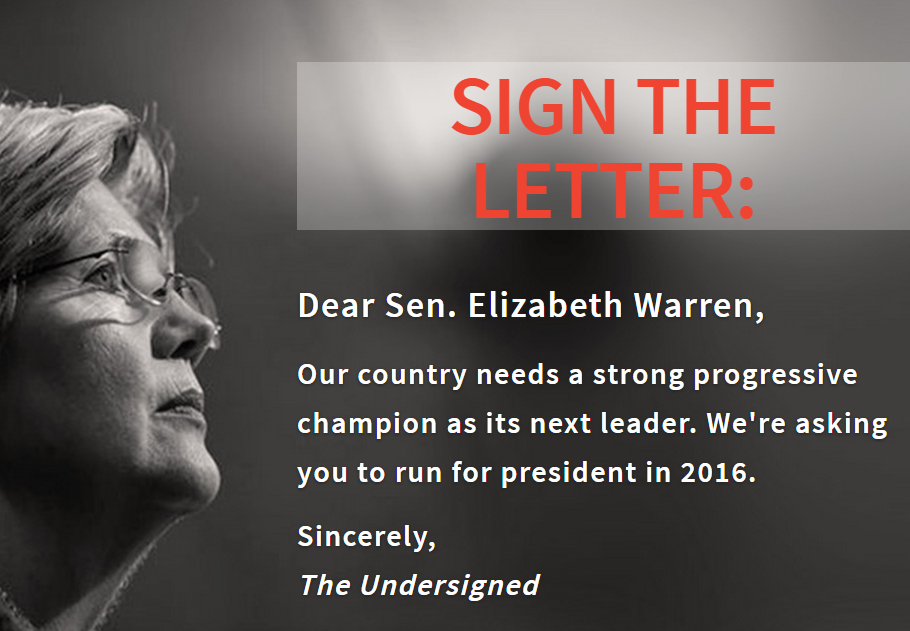 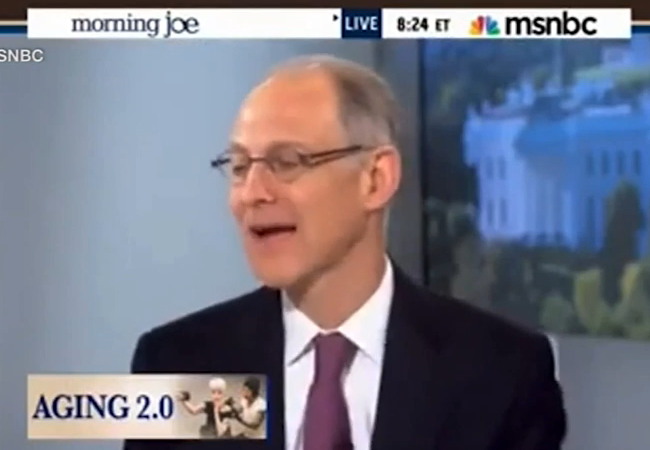 If Dr. Ezekiel Emanuel doesn’t die by age 75, should he get the Death Panel?

Posted by Mike LaChance on September 28, 2014 29 Comments
Remember when the left scoffed at Sarah Palin for pointing out that Obamacare would lead to rationing and death panels? Dr. Ezekiel Emanuel, who was involved in the creation of Obamacare, doesn't. In case you missed it, Dr. Emanuel recently penned a ghoulish piece for The Atlantic in which he said that he hopes to die by age 75. Nothing creepy about this:

Why I Hope to Die at 75 An argument that society and families—and you—will be better off if nature takes its course swiftly and promptly Seventy-five. That’s how long I want to live: 75 years. This preference drives my daughters crazy. It drives my brothers crazy. My loving friends think I am crazy. They think that I can’t mean what I say; that I haven’t thought clearly about this, because there is so much in the world to see and do. To convince me of my errors, they enumerate the myriad people I know who are over 75 and doing quite well. They are certain that as I get closer to 75, I will push the desired age back to 80, then 85, maybe even 90.

The War on Poverty Has Failed

Posted by Mike LaChance on September 17, 2014 46 Comments
For the last few years, liberals have been trying to re-brand the War on Poverty as a fight against income inequality, but that effort may have come too late. According to a new report from Robert Rector at the Daily Signal, the writing is on the wall:

The War on Poverty Has Been a Colossal Flop Today, the U.S. Census Bureau will release its annual report on poverty. This report is noteworthy because this year marks the 50th anniversary of President Lyndon Johnson’s launch of the War on Poverty. Liberals claim that the War on Poverty has failed because we didn’t spend enough money. Their answer is just to spend more. But the facts show otherwise. Since its beginning, U.S. taxpayers have spent $22 trillion on Johnson’s War on Poverty (in constant 2012 dollars). Adjusting for inflation, that’s three times more than was spent on all military wars since the American Revolution. The federal government currently runs more than 80 means-tested welfare programs. These programs provide cash, food, housing and medical care to low-income Americans. Federal and state spending on these programs last year was $943 billion. (These figures do not include Social Security, Medicare, or Unemployment Insurance.)

Michael D. Tanner of the Cato Institute made a similar point in January of this year:

War on Poverty at 50 — Despite Trillions Spent, Poverty Won Fifty years ago today, President Lyndon Johnson delivered his first State of the Union address, promising an “unconditional war on poverty in America.” Looking at the wreckage since, it’s not hard to conclude that poverty won. 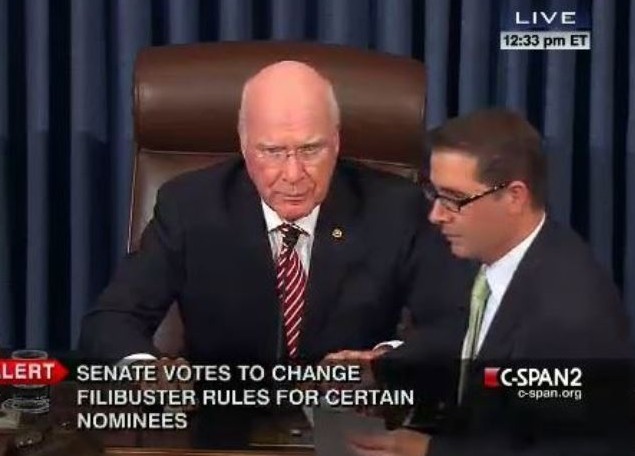 Posted by William A. Jacobson on November 22, 2013 60 Comments
The seemingly inexorable march towards economic socialism and political statism has been accomplished through legislative and judicial ratchets which, once established, were all but impossible to reverse in part because the filibuster helped lock in the agenda and those supporting the agenda. Because of the ratchet, the nation moved only in one direction: Towards redistribution of wealth, and bigger government. Because of the ratchet, there was little or no hope of fundamental reversals. Not anymore. When Democrats -- the embodiment of redistribution and statism -- exercised the Nuclear Option yesterday, they blew up the ratchet. The filibuster is dead for all purposes, even if superficially only as to non-Supreme Court nomninees. No one will respect the filibuster for Supreme Court nominees or important legislation -- the Senate can't be half pregnant. Ezra Klein gives several reasons whey the filibuster effectively is dead for all purposes, and why that may be a good thing for Republicans in the near term, Nine reasons the filibuster change is a huge deal:

8. There's a lot of upside for Republicans in how this went down. It came at a time when Republicans control the House and are likely to do so for the duration of President Obama's second term, so the weakening of the filibuster will have no effect on the legislation Democrats can pass. The electoral map, the demographics of midterm elections, and the political problems bedeviling Democrats make it very likely that Mitch McConnell will be majority leader come 2015 and then he will be able to take advantage of a weakened filibuster. And, finally, if and when Republicans recapture the White House and decide to do away with the filibuster altogether, Democrats won't have much of an argument when they try to stop them....

The inexorable march no longer is inexorable.
Read More

The “Progressive” brand — for what does it stand?

Yesterday we learned that Representative Allen West (R-FL) was disinvited from an NAACP fundraiser in his home state of Florida. Last week, West had commented that "I believe there's about 78 to 81 members of the Democratic Party that are members of the Communist Party." West,...