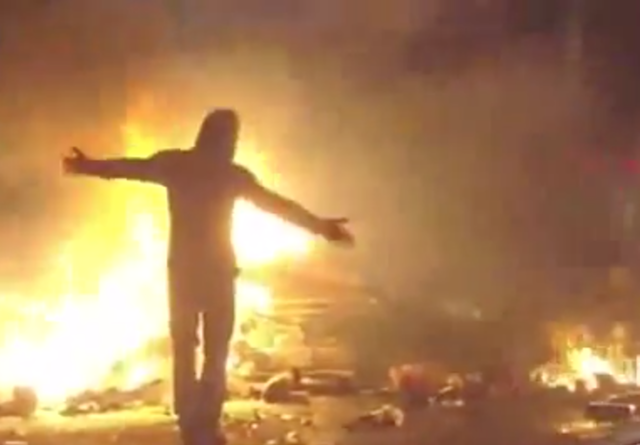 Baltimore Broke its Record For Homicides in 2015

Posted by Mike LaChance on January 05, 2016 13 Comments
The city of Baltimore reached a grim milestone in 2015 by racking up more homicides in one year than ever before. Kevin Rector reported at The Baltimore Sun:

Deadliest year in Baltimore history ends with 344 homicides Blood was shed in Baltimore at an unprecedented pace in 2015, with mostly young, black men shot to death in a near-daily crush of violence. On a per-capita basis, the year was the deadliest ever in the city. The year's tally of 344 homicides was second only to the record 353 in 1993, when Baltimore had about 100,000 more residents. The killings were on pace with recent years in the early months of 2015 but skyrocketed after the unrest and rioting of late April. In five of the next eight months, killings topped 30 or 40 a month. 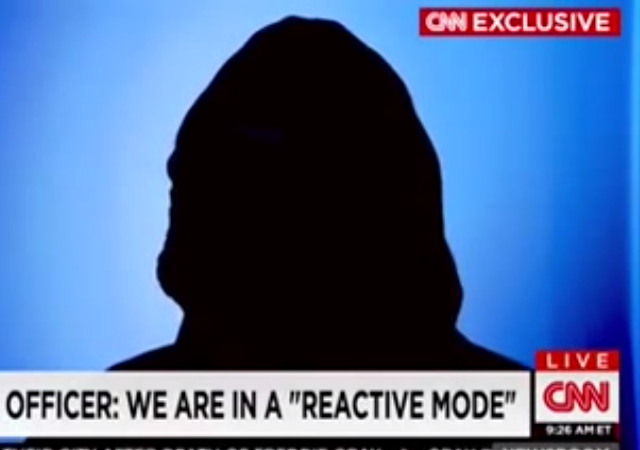 Posted by Mike LaChance on June 11, 2015 54 Comments
Baltimore is caught in a law enforcement conundrum. People rioted over what they claimed was police brutality and as a result, cops are doing less than they used to. Can you blame them? Public backlash and fear of prosecution have caused them to switch from proactive policing to a reactive mode. This chart from the Baltimore Sun illustrates the gravity of the situation by comparing arrests from 2014 and 2015: 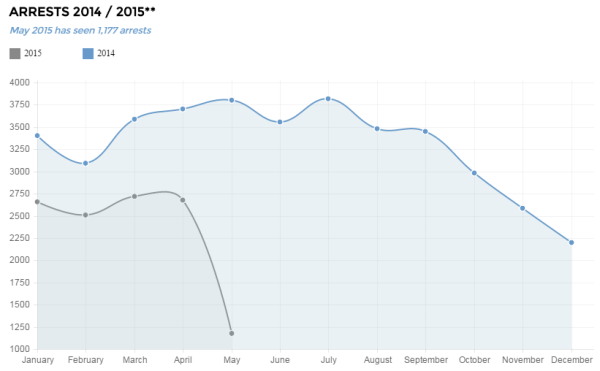 Allahpundit of Hot Air points out some grim statistics: 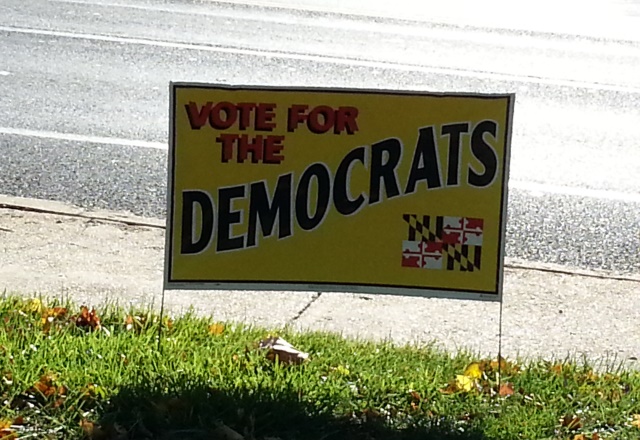 Why vote for Democrats?

Posted by David Gerstman on November 03, 2014 11 Comments
As the election comes down to the wire in Maryland in two days, I spent some time driving around my neighborhood looking for campaign signs. My neighborhood isn't the best bellwether for Maryland election results. If my neighborhood were representative, Bob Ehrlich would have won a second term in 2006  ... with about 80% of the vote. Instead he lost to current governor, Martin O'Malley, despite Ehrlich's maintaining an approval rating that exceeded 50%. In any case lately these "Vote for the Democrats" (see the featured image above) signs have been popping up. I guess in Maryland you vote for Democrats as a matter of faith. After all Lt. Gov. Anthony Brown wouldn't have a chance if the election turned on his competence. But Maryland Republicans have an effective comeback. One sign right next a Larry Hogan (for governor)  asks if you've had enough tax increases under the O'Malley-Brown administration. 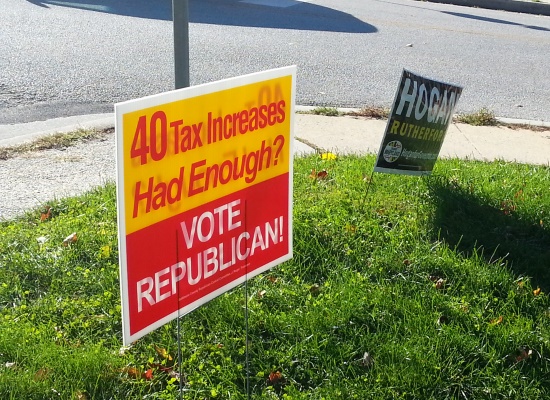 O'Malley intent on being the Democratic nominee in 2016, used his two terms in office to turn Maryland into a Democratic paradise. In 2007 and 2012, O'Malley convened special sessions of the Democratic controlled legislature to raise taxes. (In 2007, the special session was called to address a $1.9 billion "structural deficit" out of a total budget of some $37.3 billion of spending, which amounted to roughly 5% of the budget.) Perhaps the Democrats' tendency to hike taxes as a first resort turned off a lot of unaffiliated voters. I'm guessing that the Republican message is gaining some traction. But the other thing that I thought was remarkable was the relative lack of Brown signs. Even many homes and businesses, which had signs promoting local Democratic candidates didn't have Brown signs. Like at the house below.
Read More 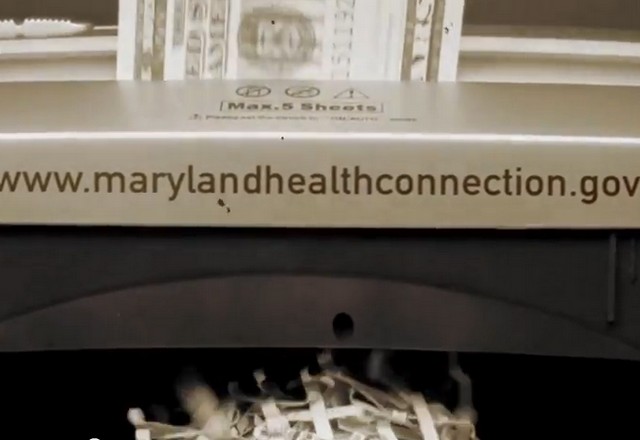 Is Maryland ready for change?

Posted by David Gerstman on June 29, 2014 12 Comments
The primaries are over and Maryland's nominees for governor are Lietenant Governor Anthony Brown for the Democrats and Larry Hogan for the Republicans. Despite having failed at his most prominent job as Lieutenant Governor the state's Democrats want to give him a promotion. I previously critiqued the Washington Post's endorsement of Brown. The Baltimore Sun too endorsed Brown.

As for Mr. Brown, we'll address his flaws first. We have been consistently critical of his lack of transparency in discussing his role in Maryland's disastrous health insurance exchange launch. His explanations have been guarded and convoluted; a simple apology and a pledge to learn from the experience would have been much better. Mr. Brown was, officially, Maryland's point-person for health care reform. Had the website been a success, he would have taken credit; thus, he must accept a share of blame for its failure. That said, the buck stops with Gov. Martin O'Malley, not Mr. Brown, whose actual role appears to have been more symbolic than managerial.

That's an endorsement? He wasn't incompetent he really wasn't supposed do anything? Worse the Sun called Gansler, "able public servant during his long career." The Sun's criticisms of Gansler stemmed from his campaign not for his governance. To endorse the guy whose managerial role they described as "symbolic" over someone with a track record is ridiculous. I bring up the endorsements again even though the race is over, because it shows the lengths that Brown's supporters have to go to get past his failure. Either they ignore it or they say he was a no show. Neither one is a ringing endorsement for the guy's leadership. But the failure isn't just Brown's, or the O'Malley/Brown administration. It's the failure of Maryland's Democratic party - as nearly the entire leadership of the party in Maryland endorsed Brown. And the leading newspapers in Maryland endorsed him too. So the Democrats want power without responsibility. And the media that should be serving as a check on government's power have failed miserably in their civic responsibility. Look at Brown's last ad before the primary, called "Step up." Brown comes across as confident, but even as he asks viewers for their help to "build a better Maryland," he offers no qualifications for the job, only that he is driven by the value his father instilled in him that "service to others comes first." He sounds like it is his convictions not his record that should be the criterion for choosing him. He wants us to forget his record.
Read More 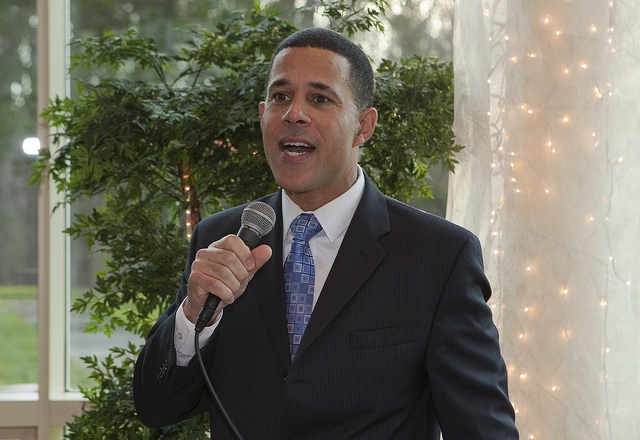 Posted by David Gerstman on June 12, 2014 17 Comments
As Bryan Jacoutot documented here three months ago, Maryland's health exchange was a complete failure. In private industry or nearly any other field of endeavor, an employee who is responsible for such a visible failure would be subject to demotion or firing. But this is politics. And this is Maryland. So the Washington Post recommended that the employee responsible for this fiasco ... should be promoted. In its endorsement ahead of the June 24 primary the paper with the largest circulation in Maryland endorsed (Lieutenant Governor) Anthony Brown for Maryland governor. The key paragraph in the endorsement is here:

No doubt, Mr. Brown, who is Gov. Martin O’Malley’s anointed successor, is a mainstay of the Democratic establishment and a paragon of the status quo. That status quo includes the state’s blatant failure to build a functioning online market for private health insurance — a failure over which Mr. Brown presided, or was supposed to preside. It also includes substantive accomplishments, including making the state more welcoming to gays and immigrants and replenishing the transportation fund in support of public transit.

So let's see if I get this. Despite the fact that Brown messed up his most significant assignment as Lieutenant Governor - concrete failure - that should be balance out by the fact that he made Maryland more welcoming - an ephemeral accomplishment at the best? As far as the transportation fund, taxing people is what government does best. Had he (and his boss, Governor O'Malley) replenished the fund while limiting the growth of government, that would have a real accomplishment. But taxing and spending is hardly a defining skill for an executive. Then there's the previous paragraph that's also kind of baffling.
Read More 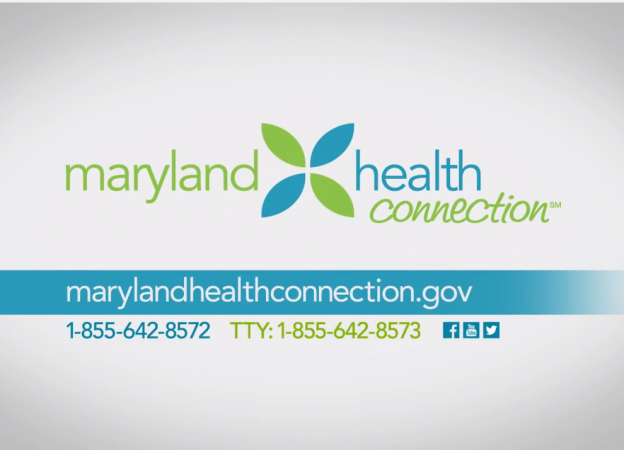 Posted by Bryan Jacoutot on March 02, 2014 22 Comments
Deep blue Maryland was quick to accept the federal dollars offered for Medicaid expansion as a result of the passage of Obamacare. It has become a common theme among Democrats to blame the failures of Obamacare on Republican unwillingness to accept the law. It seems, however, that even the most ardent supporters of Obamacare can’t save the law from its inherent flaws. Indeed, apart from the federal healthcare rollout debacle, we’ve seen blue states that wholeheartedly embraced Obamacare share in a litany of procedural and substantive follies of their own. HotAir recently reported on one such case in Maryland.

The situation is bad enough that this essentially one-party state has devolved into a fight over whether they should abandon their $100 million dysfunctional site for the federal site, and Democrats running for governor are whacking each other with its failure.

The Washington Post also reported on the clear failure,

Maryland was one of 14 states that chose to build their own health-insurance marketplaces to implement President Obama’s Affordable Care Act, which politicians and residents in the state strongly support. Gov. Martin O’Malley (D) boasted that the marketplace and the Web site Marylanders would use to access it would be among the best in the country. But the site failed within minutes of its Oct. 1 launch, blocking residents who were trying to get health insurance. The system has limped along since then. Ultimately, state officials say, they may have to rely at least partially on the federal health-care Web site or on sites operated by other states.

In late February, the Washington Post ran an editorial Solution Politics in Virginia that began: IN VIRGINIA, A REPUBLICAN governor and a GOP-dominated legislature have joined forces with Democrats to enact the first long-term increase in transportation funding since the Reagan administration — and the state’s...