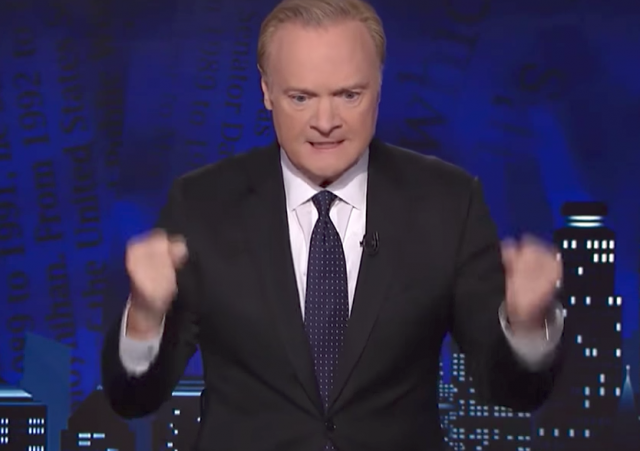 Lawrence O’Donnell: Trump may have killed Soleimani “to influence Bolton not to testify to the Senate”

Posted by Kemberlee Kaye on October 16, 2017 13 Comments
A few weeks ago, Mediaite published a leaked video of MSNBC host Lawrence O'Donnell have the meltdown of all meltdowns. In the video, O'Donnell slammed his fists on the desk repeatedly and unfurled a profanity-laced tirade at the production staff for not properly dealing with a hammering noise coming from somewhere in the building. O'Donnell was not appreciative of having someone else's happy hour plans discussed in his ear piece during segments either, or what he called “insanity in my earpiece".
Read More 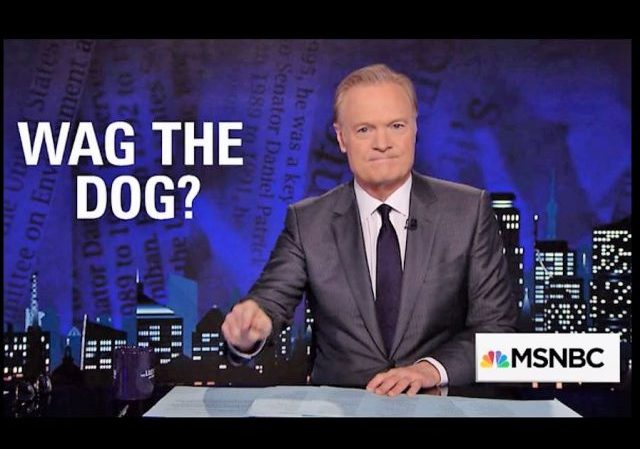 Posted by William A. Jacobson on April 08, 2017 40 Comments
Donald Trump ordered a limited military strike on a Syrian air base after the Syrian military was believed behind a chemical weapons airstrike that killed dozens. The military strike generally received praise both because it happened and because, at least for now, it was limited and intended to establish the red line that Obama ignored. Whatever other horrific warfare has taken place in Syria, and it has been horrible on a historic scale, the use of chemical weapons would not be tolerated. The plans for an attack were drawn up by the U.S. military, among many alternatives. The Russians, apparently, were alerted at some level beforehand since the attack was on an airbase also used by the Russians. To have done otherwise would have risked a wider conflict if Russian troops were hit by U.S. launched missiles. So that minimal coordination, which takes place among several militaries operating in the skies over Syria, was a cautious move by the U.S. military and Trump. The widespread praise for Trump's action has triggered some really bizarre conspiracy theories.
Read More 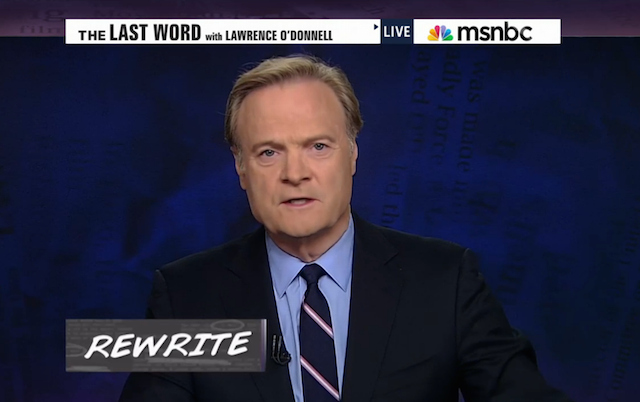 Posted by Andrew Branca on November 29, 2014 37 Comments
As a follow-up to our post yesterday, de-bunking Lawrence O'Donnell's claim that a purported error on the part of prosecutors led the Ferguson Grand Jury into error, I thought it might be informative to progress that de-bunking to an even more comprehensive level. As noted yesterday in No, Prosecution did not Mislead #Ferguson Grand Jury into Erroneous Decision, Officer Wilson had several potential legal justifications for his use of deadly force against Michael Brown.  Among these were the justification to use deadly force in making an arrest under MO statute §563.046. Law enforcement officer’s use of force in making an arrest and, alternatively, the justification to use deadly force in self defense under MO statute §563.031. Use of force in defense of persons, the state’s self-defense statute.  Both of these statutes were presented to the Grand Jury. Either one of these statutes alone is more than sufficient to justify Wilson's use of deadly force against Brown.  He did not, however, attempt to avail himself of both statutes. Wilson himself testified for more than four hours to the Grand Jury, in person and without legal counsel present.  during the entirety of that testimony he never--not once--argued that his use of deadly force against Brown was based on an effort to arrest Brown in general, nor based on his arrest powers under §563.046 in particular. To the contrary, Wilson relied explicitly and entirely on his right to use deadly force in self-defense, as allowed for by §563.031.
Read More

No, Prosecution did not Mislead #Ferguson Grand Jury into Erroneous Decision

Posted by Andrew Branca on November 28, 2014 62 Comments
There have been many false factual narratives of the Michael Brown killing, such as "hands up, don't shoot." Now there's a new false legal narrative spreading, that a prosecutorial mistake misled the Grand Jury into erroneously failing to indict Police Officer Darren Wilson. The source of the claim appears to be MSNBC's Lawrence O’Donnell. O'Donnell, who was magnificently misleading in the Trayvon Martin case, expounds on this claim in the Ferguson case with absolute moral and intellectual certainty, as he always does. The heart of O'Donnell's claim is that a legal error in presenting the law on use of force in making an arrest early in the Grand Jury proceedings somehow led the Grand Jury astray.  O'Donnell maintains that this error could have led the Grand Jury to think it was okay to shoot Michael Brown in the back as he was running away, even though the corrected law was given to the Grand Jury prior to deliberations. There are at least two major flaws in O'Donnell's argument. First, and most important, even if O'Donnell is correct that prosecutors misstated one justification for Wilson's use of deadly force (arrest powers), these same prosecutors correctly stated an alternative and independent justification for that same use of force (self-defense). Thus, even if Wilson's arrest powers were insufficient justification for his use of deadly force, his right of self-defense was more than sufficient justification for that use of deadly force. And even O'Donnell claims no error in that instruction to the Grand Jury. Second, the justification that O'Donnell claims was read to the jury in error is entirely irrelevant, as it applies only if the suspect is shot while fleeing arrest. Here, Michael Brown suffered not a single gunshot wound to the back, nor did Wilson ever claim to have shot Brown while he was fleeing in order to affect an arrest.  Instead, Wilson claims consistently that he shot Brown in self-defense, and numerous witnesses testified and the forensic evidence supports that Wilson fired only when Brown was actively advancing towards, and not while Brown was fleeing from, Wilson. As a result the legal justification that O'Donnell claims to be in error, that of arrest powers, simply has no application to this case. Now to the video: O’Donnell’s diatribe is an almost perfect example of what is commonly referred to as a “straw man” argument.
Read More

Can they both lose?

That could apply to so much of what is going on in the news. But I'm referring to Lawrence O'Donnell and Anthony Weiner. ...

History started with Obama: Crowd taunts and mocks President, what have we become America?...

Yes, Lawrence, there is a photograph of Zimmerman’s bloody nose

Remember when ABC obtained a police station surveillance tape which supposedly showed no injuries to George Zimmerman, thereby allegedly disproving his claim that he was being beaten when he shot Trayvon Martin? The Martin family lawyer along with plenty of left-wing blogs (including a once-famous photo...

Lawrence O’Donnell calls for secession … in 2004

Alternative Title:  "Election losers embrace secession to escape evil President's second term." Tuesday, Nov 16, 2004 08:55 PM EST If at first you don’t secede Feeling they've lost any say in how the nation is run, liberals are turning to an unfamiliar philosophy: States' rights. Guess who was...

Harvard grad Lawrence O’Donnell, who grew up in privilege, challenges Tagg Romney to a fight

Had to fight his way through tough streets of Boston?...

Saturday Night Card Game (How many pours of MSNBC can you withstand?)

Because you have been bad, and because I want to inflict maximum pain, you must watch all 12 minutes of this video in which Lawrence "Herman Cain didn't know how to be black" O'Donnell leads a panel of race card players attacking Mitt Romney's speech to...

There is something seriously disturbed with Lawrence O'Donnell.  Who ever thought we would long for the days of Keith Olbermann. A lawyer representing an accused has no obligation to present defense evidence on television.  O'Donnell knows that, his outrage is feigned and phony.  O'Donnell is not...

This is possibly the most offensive interview sequence I've ever seen. Lawrence O'Donnell lectures and snidely criticized Herman Cain, who was a minor when Rosa Parks refused to sit in the back of the bus in 1955 and in high school for the desegregation fights in the...

A person who knows the facts, versus an agenda-driven hack so-called journalist who has all the talking points on the tip of his tongue.The person with the facts wins.Gets particularly interesting around th 8:00 mark, for those of you who have work to do and...

“Olbermann Without A Sense of Humor” Now The Face of MSNBC

The 8 p.m. time slot is the premier evening news spot on cable.  For Fox News, the slot is held by Bill O'Reilly, who has become the most public face of Fox News.MSNBC is replacing Keith Olbermann in the 8 p.m. slot with Lawrence O'Donnell,...

“Have You No Job, Sir?” – Olbermann Out At MSNBC

Keith Olbermann is out at MSNBC according to a press release issued by MSNBC:STATEMENT REGARDING KEITH OLBERMANNMSNBC and Keith Olbermann have ended their contract. The last broadcast of “Countdown with Keith Olbermann” will be this evening. MSNBC thanks Keith for his integral role in MSNBC’s...