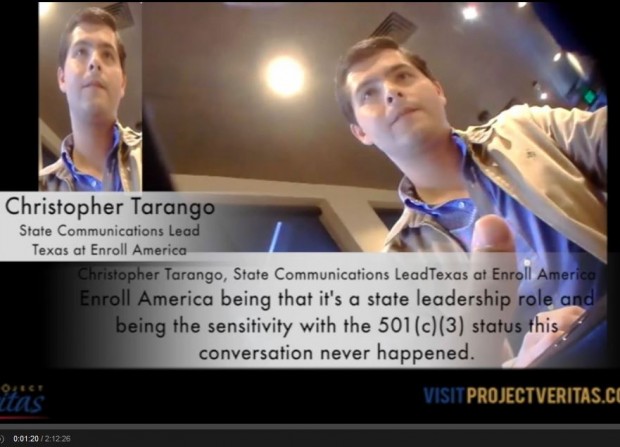 Posted by William A. Jacobson on November 20, 2013 17 Comments
James O'Keefe's Project Veritas is out with another investigative video exposing highly questionable "cross-pollination" between Enroll America and Texas Democratic political operatives. Enroll America bills itself as:

a nonpartisan 501(c)(3) organization whose mission is to maximize the number of uninsured Americans who enroll in health coverage made available by the Affordable Care Act.

Do you know where your personal data is going? After meeting with several Obamacare Navigators who openly encouraged our undercover reporters to lie about income status, health history and more, it became clear that personal data was also being “cross-pollinated.” Enter Enroll America, a Sebelius-linked group dedicated to signing people up for Obamacare and Chris Tarango, Texas Enroll America Communications Director who Project Veritas caught on tape agreeing to help obtain a private list of potential Obamacare enrollee data for election/political purposes. Tarango goes so far to say he’ll “Do whatever it f****** takes.”

Here's the video, the first 15 minutes of which are the edited video, the remainder the raw video: Eliana Johnson at National Review has a more complete explanation:
Read More

James O’Keefe knows how to roll out a new book

Today is the official release date of James O'Keefe's new book which Leslie reviewed this weekend, Book Review: James O’Keefe’s Breakthrough. In honor of the release, I assume, O'Keefe rolls out what is sure to become a viral video (via Drudge/Daily Mail): Here's the video: ...

James O'Keefe's book, Breakthrough: Our Guerrilla War to Expose Fraud and Save Democracy, should really come with the following warning for summer readers: CAUTION: Compelling book causes intense concentration; sunburn is possible. As I recover from being toasted by the California sun, I wanted to share the...

Get off Piers Morgan’s lawn!

Piers Morgan has had some epic gun control rants. It resulted in aggressive push back from people like Dana Loesch. Now James O'Keefe is on it: Hey, @piersmorgan, can you please explain these signs on your Beverly Hills property? twitpic.com/cghoe4 — James O'Keefe(@JamesOKeefeIII) April 2, 2013 Via National Review (h/t...

James O'Keefe's Project Veritas has released a new video that exposes unions willing to dig holes and fill them in again against the backdrop of the farce that is Obama's "shovel-ready jobs" agenda. The video, "Legislators, Union Bosses Seek Funding for Digging Holes and Filling...