Video: Did The Zimmerman Jury Get It Right?

Andrew Branca and I gave a lecture on September 12, 2013, at Cornell Law School in an event sponsored by the Cornell 2nd Amendment Club. The topic was the George Zimmerman shooting of Trayvon Martin and subsequent trial. My segment starts at 2:45 and Andrew Branca's at...

"evidence did not support the original complaint"...

Posted by William A. Jacobson on September 10, 2013 63 Comments
Late Update: Police released the home security system raw video. The video looks like someone was videoing a screen, and was able to zoom in and out of the screen. The video doesn't show much until about the 6:45 mark, when several people including a large man confront George on the driveway. The man puts his hand on George. It then appears that the man either gave George or he had with him what likely was the iPad. It looks like George was doing something to it (Shellie said cutting) and then threw it on the ground: 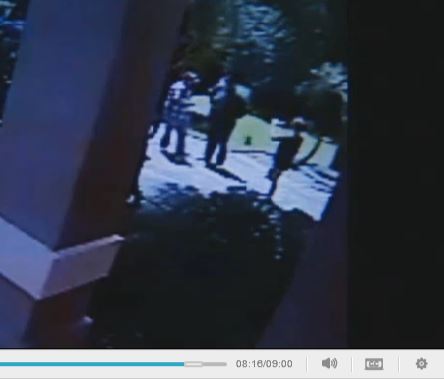 Other than that, the video doesn't show any sort of confrontation, although throughout it people, including what appears to be Shellie holding the iPad, follow him around in a somewhat aggressive posture, getting between him and the car he was filming. FOX 35 News Orlando --------------------------------- Lake Mary, Florida, police are holding a press conference as to video just released of the altercation between George and Shellie Zimmerman. Prior post: iPad video important to Zimmerman dispute as police continue to investigate. Police dash cam video (full embed at bottom of post) shows Zimmerman being placed into custody. It is not known if the police will have news about iPad video which may show the confrontation. UPDATE: The Police have not yet decided whether to charge anyone. The witnesses in the house did not clearly see the confrontation and are unclear as to what happened. The video on the iPad has not yet been recovered, but the police expect that it will be, and at that point they will make a decision. The police did not search the car because all witnesses, including Shellie and her father, told police that they did not actually see a gun, and the police did not believe they had probable cause to search the car. [Press conference over, will post video when available]
Read More

Lake Mary Police in Florida say that George Zimmerman and his wife are blaming the other for being the aggressor in Monday’s incident in which Shellie Zimmerman called 911 to report that her estranged husband was threatening her and her father with a gun.   Initial...

Posted by William A. Jacobson on September 09, 2013 129 Comments
Well, there is joy in Mudville, because George Zimmerman has another legal problem. The details are murky and unclear, but that's not stopping the "I told you so" reaction, as if a new problem proves guilt on a past problem. It really is a horror show to watch (Twitter feed embedded at bottom of post, view at your own caution)(added -- more "reliable" news feed now at bottom as well). Here's the most recent Orlando Sentinel update as of 3:51 p.m., click the story link for further updates, George Zimmerman in custody, police investigate 'possible domestic battery':

George Zimmerman, the former Neighborhood Watch volunteer acquitted of murder in the shooting of 17-year-old Trayvon Martin, is under investigation this afternoon after his wife told police that he'd threatened her family, police confirmed. Police are investigating a "possible domestic battery" involving Zimmerman on Sprucewood Road, Lake Mary police Officer Zach Hudson said this afternoon. About 3:40 p.m., Hudson said that Zimmerman was no longer detained and was not in custody. The police spokesman said Zimmerman has been cooperating with police. According to Lake Mary police Chief Steve Bracknell, Zimmerman's wife Shellie Zimmerman called police and said that her husband had made threats to her family "with his hand on his gun." She also alleged that George Zimmerman had battered her father, David Dean, Bracknell said. The police chief said about 3:30 p.m. Shellie Zimmerman and her father were consulting with their attorney to decide whether to give a sworn statement or press charges. Hudson said the investigation is in its early stages, and it was unclear whether Zimmerman or anyone would be arrested. No significant injuries were suffered in the incident, Hudson said.

Did the Jury get it right in The Zimmerman Trial?

Umm, let me think on that. I have until September 12 at 4 p.m. to decide. This event sponsored by the Cornell Law School 2nd Amendment Club is open to the public, although good luck finding parking! Update: In response to some reader inquiries, I'm not sure if...

It is said that the first casualty of war is the truth, and we are being provided with a ringside seat to just such political theater with today’s newest front on the war on law-abiding gun owners. That front is, of course, being waged on so-called...

ABC News conducted an extensive interview of Shellie Zimmerman this morning. In a wide-ranging interview conducted by investigative freelance journalist Christi O'Connor, Zimmerman said on the evening Martin died she was staying elsewhere because the couple had got in an argument the night before and that...

Posted by William A. Jacobson on August 28, 2013 87 Comments
We have detailed before the perjury charge against George Zimmerman's wife, Shellie, based on her testimony during a bail hearing as to their assets. I've pointed out that legally the charge was weak because perjury requires an affirmative misstatement of a material fact, and many of her answers, while evasive and misleading, did not rise to that level.  Many of the questions at issue were ambiguous and called for opinionated characterizations. Perhaps recognizing the weakness of the case, it appears that the prosecution has agreed to a plea deal. (Update: Plea Deal docs embedded at bottom of post.) The Orlando Sentinel is reporting that Shellie will plead guilty to a lesser count of perjury, and will receive a sentence of one year probation:

Shellie Zimmerman, the wife of acquitted murder suspect George Zimmerman, will today plead guilty to a less serious form of perjury in a plea deal that will require her to serve one year of probation. It was a negotiated deal, designed to leave her with no criminal record. The 26-year-old was a nursing student nearly done with her schooling at the time of her arrest. Had she been found guilty of a felony — the perjury charge she was facing — she would have been banned from applying to become a nurse for three years. The deal also requires her to write a letter of apology to Circuit Judge Kenneth Lester Jr., the judge to whom she was accused of lying, and to serve 100 hours of community service. The official charge filed against Shellie Zimmerman is perjury during an official proceeding - of lying during one of her husband's bond hearings last year. That's a third-degree felony, which carries a possible five-year prison term.

Update: The Orlando Sentinel has updated its story, now that the plea deal was accepted in court:

Circuit Judge Marlene Alva accepted the plea during a brief hearing at the Seminole County criminal courthouse in Sanford. It was a negotiated deal, designed to avoid a felony conviction. The 26-year-old was a nursing student nearly done with her schooling at the time of her arrest. Had she been found guilty of a felony — the perjury charge she was facing — she would have been banned from applying to become a nurse for three years.

Maybe to thank them for building the gun that allowed him to lawfully defend himself against a brutal beating which put him in reasonable fear of death or great bodily harm? Maybe, as is speculated, to check out tactical shotguns? Maybe just because he is a private...

Shellie Zimmerman, wife of George Zimmerman, was scheduled to appear in court on Wednesday, for a hearing on perjury charges brought against her in connection with her husband's recent murder trial. This hearing has been postponed. In place of the trial, a status conference on her upcoming...

Just when you thought the Zimmerman case couldn't get any crazier, here we go. An amicus curiae brief has been filed in support of a motion to re-try George Zimmerman for second-degree murder. The full brief is embedded at the bottom of this post.  ("Amicus curiae" literally...

It is perhaps inevitable that comparisons will be drawn between the  recently completed murder/self-defense trial of George Zimmerman in Florida and the just beginning travails of self-defense shooter Merritt Landry in New Orleans. Indeed, I've already begun to do so myself (see "Zimmerman Redux: The Breaking...

Of course, the two cases bear no resemblance at so many levels. But Oprah can't help herself, and debases the memory of Emmett Till by comparing Till's whistling at a white woman and subsequent beating death to the violence perpetrated by Trayvon Martin upon George Zimmerman who acted...

So now we have word that the Smithsonian is "eyeing" Trayvon Martin's hoodie for its new branch, the National Museum of African American History and Culture. According to the branch's director Lonnie Bunch: It became the symbolic way to talk about the Trayvon Martin case...