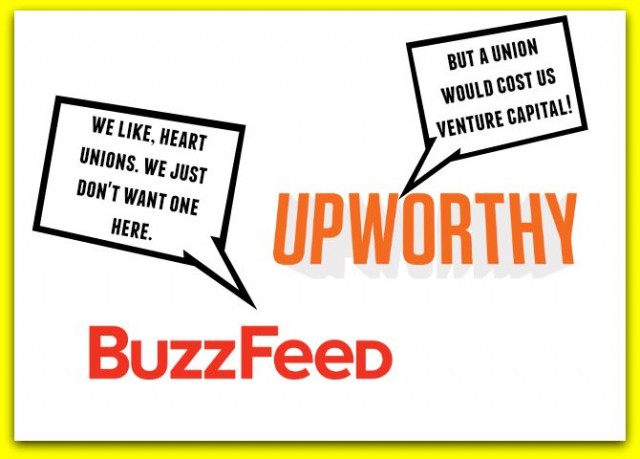 Posted by Kemberlee Kaye on August 17, 2015 7 Comments
A few months ago Gawker staffers successfully formed an employee union. Why? Because they wanted a union. Yes really, that's the only reason. Whether the move spooked other prominent trash click sites or because their own employees were mumbling uniony things is unclear, but both Upworthy and Buzzfeed have discouraged their employees from going the way of Gawker. Last week, Buzzfeed founder and CEO Jonah Peretti reportedly explained in a staff meeting that, "he doesn’t think unionization is “the right idea” for BuzzFeed," writes Buzzfeed. Buzzfeed reports:

“I think unions have had a positive impact on a lot of places, like if you’re working on an assembly line,” Peretti said at a company meeting. In such cases, “if you’re negotiating with management it can make a huge difference, particularly when labor is more replaceable.” In contrast, he said BuzzFeed patterns itself after companies like Google and Facebook, which compete for less replaceable talent by offering better compensation and benefits.