CNN Tuesday Debate: Do or Die for Some

Posted by Fuzzy Slippers on December 13, 2015 8 Comments
With Ted Cruz soaring to a 10pt lead in Iowa, Chris Christie gaining momentum in New Hampshire, Ben Carson losing some ground, Marco Rubio gaining in some polls and holding steady in others, Jeb Bush teetering along, and Donald Trump still dominating in most state and national polls, Tuesday's CNN debate should be interesting. Nine candidates will take the stage and be positioned according to their current standing in national polls. CNN reports:

Nine candidates will appear in prime-time Tuesday night for the final Republican presidential primary debate of 2015, a critical event that will help shape the contest heading into the Iowa caucuses. 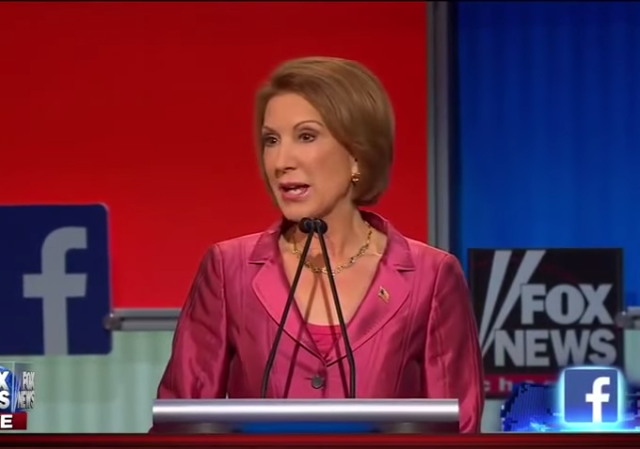 No Main Stage Appearance for Carly Fiorina in Next GOP Debate?

Posted by Kemberlee Kaye on August 29, 2015 23 Comments
As things stand now, the only woman in the densely populated Republican presidential primary field might not get a spot on the main stage at the next GOP debate. Carly Fiorina is contesting the decision by CNN, who's hosting the debate scheduled for September 16. Fiorina claims CNN as well as the RNC were intentional working to keep her off the debate stage. CNN claims FEC regulations require adherence to debate selection guidelines as they were originally published in May saying, "we believe our approach is a fair and effective way to deal with the highest number of candidates we have ever encountered." According to Fox News, RNC Spokesman Sean Spicer* explained they are legally prohibited from interfering with the media's rules. The debate stage accommodates the ten highest polling candidates. Based on national polls conducted since the Fox News debate held August 6, Fiorina is polling around 8th place. According to CNN's qualification guidelines, national polling averages taken between mid-July and mid-September determine which candidates make the top ten.
Read More 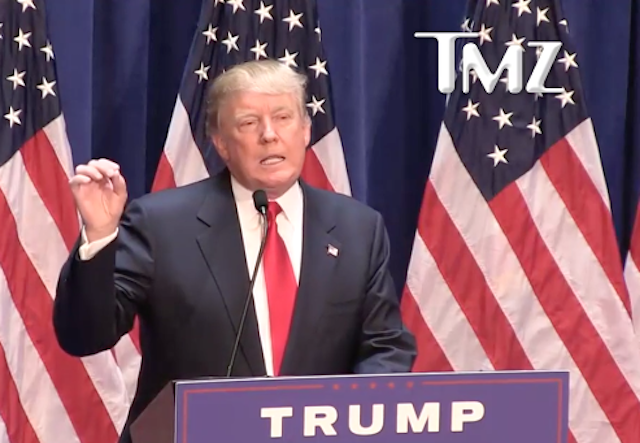 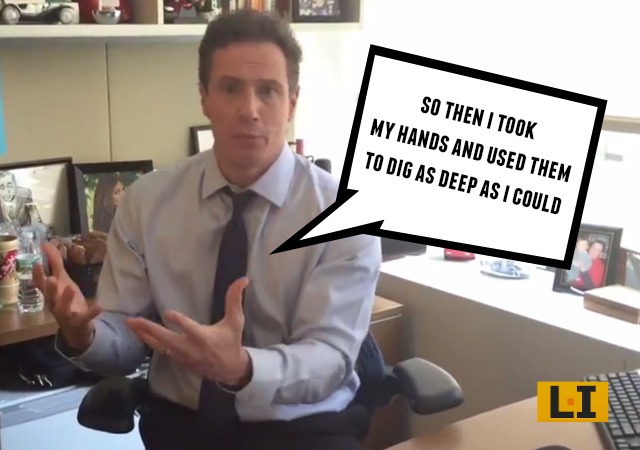 Posted by Kemberlee Kaye on May 07, 2015 24 Comments
After showing the internet how little he knew about free speech yesterday, Chris Cuomo attempted to rectify his Constitutional missteps in a short video. "I got beat up for this tweet I made; it was a clumsy tweet. I was caught up in a back and forth..." he began. First, the tweet:

We've been searching high and low for Cuomo's version of the Constitution to no avail. But in the mean time, not only do we say we love the Constitution, we've actually read it (though not on the counsel of Cuomo). Our version of the first amendment completely disagree's with Cuomo's because it simply states: 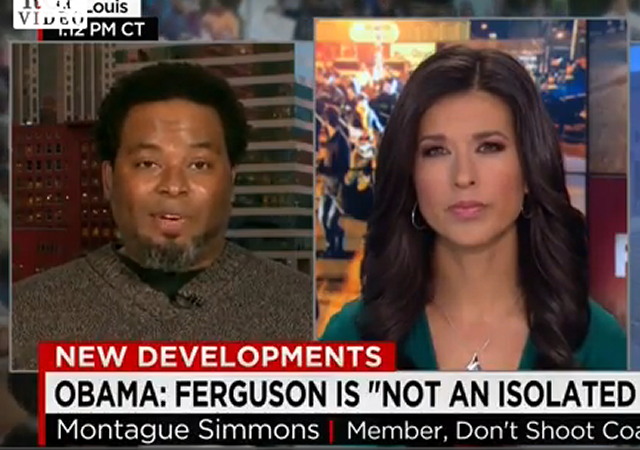 Posted by Mike LaChance on March 08, 2015 26 Comments
The Justice Department has confirmed that the entire notion of "Hands Up, Don't Shoot" was completely false. That hasn't stopped one CNN host from keeping the meme alive, if only in a "symbolic" way. Transcript and video via Real Clear Politics:

ANA CABRERA, CNN: You’re part of this Hands-Up-Don’t-Shoot coalition. Have you had a chance to read the Justice Department's findings on Michael Brown's death, as they pertain to Darren Wilson? MONTAGUE SIMMONS, DON'T SHOOT COALITION MEMBER: I’ve had a chance to take a glance, yes. ANA CABRERA: Has it changed your view of Darren Wilson at all, the fact he was cleared in this incident? MONTAGUE SIMMONS: Not at all. Unfortunately, the findings were expected -- meaning that usually in these cases we've seen law enforcement, and the voice of the officers involved, are given much heavier weight than [other] witnesses. Even though we've seen countless witnesses come forward and testify that his hands were up, they're still giving a greater weight to law enforcement's findings. Even if his hands weren't up in this case, he was not -- he should even have been executed in the way he was. ANA CABRERA: Obviously the whole catch phrase hands up don't shoot takes on a much more symbolic meaning moving forward.

Watch the video: CNN has taken a keen interest in the idea of "hands up, don't shoot" from the beginning.
Read More 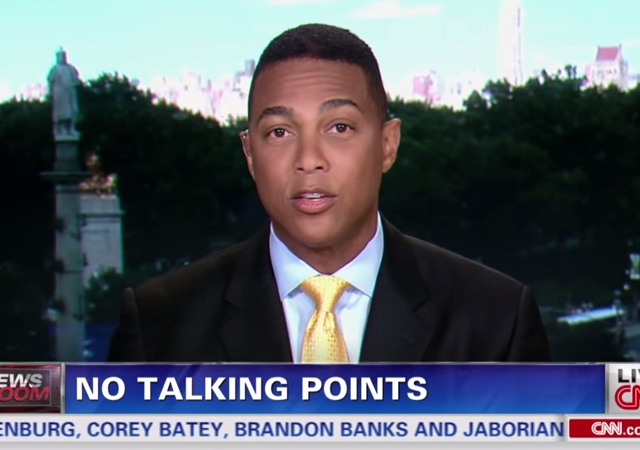 Posted by Mike LaChance on December 29, 2014 8 Comments
I don't watch CNN anymore, but I'm very familiar with Don Lemon from all the times he's appeared on conservative news sites seeking to correct something he said. According to The Hollywood Reporter, lots of people have noticed Lemon's work:

CNN's Don Lemon Named to 'Worst Journalism of 2014' List Don Lemon has picked up a dubious honor: ranking in a Columbia Journalism Review fellow's list of the "worst journalism" of 2014. The anchor has made headlines throughout the year for controversial moments during his tenure as a CNN newsroom anchor. In a post written by David Uberti, the CJR fellow makes a case for why Lemon deserves to be ranked along with other missteps in journalism over the past year. "As one of the most recognizable anchors on CNN, Don Lemon has helped lead the cable network’s coverage of the biggest stories of the year. Live television is exceedingly difficult to produce, of course, but Lemon’s gaffes this year offer a case study in how to choose words wisely — or not," Uberti wrote.

The fine folks at Twitchy think they may have uncovered the reason for Lemon's new distinction:

Don Lemon’s report on black holes and missing plane help him win ‘Worst of 2014′ award CNN anchor Don Lemon has taken his share of hate on Twitter: a former Miss Teen USA called Lemon a “modern day house negro,” hip-hop mogul Russell Simmons labeled him “a dangerous talking head” and MSNBC’s Goldie Taylor accused him of being a “turn coat mofo.” And those are just the racial attacks; there’s also the matter of Lemon’s skills as a journalist. 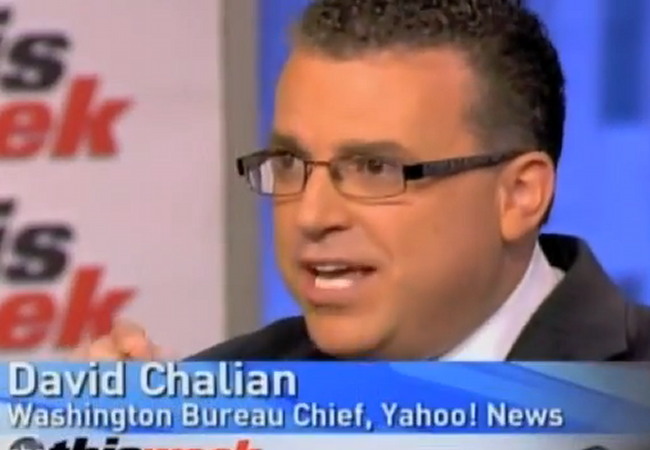 Posted by Mike LaChance on June 08, 2014 9 Comments
Do you remember David Chalian? He was a reporter for Yahoo! back in 2012 and while covering the Republican National Convention he was caught on tape smearing the Romneys and implying that they were racists as to blacks suffering from Hurricane Isaac:

"They're not concerned at all. They're happy to have a party with black people drowning..."

CNN just hired him as their new political director. Geoffrey Dickens of News Busters has the details: 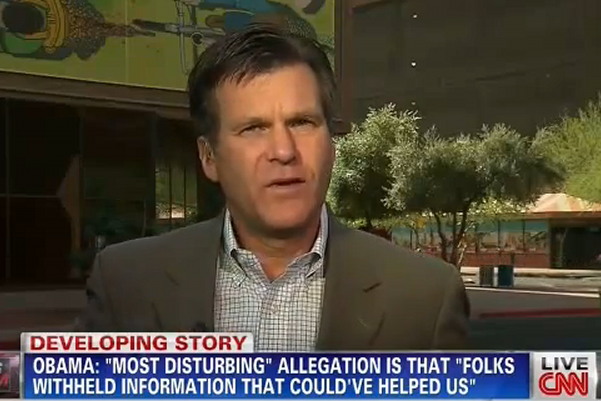 "I was a little caught off-guard by what apparently is a disconnect."... 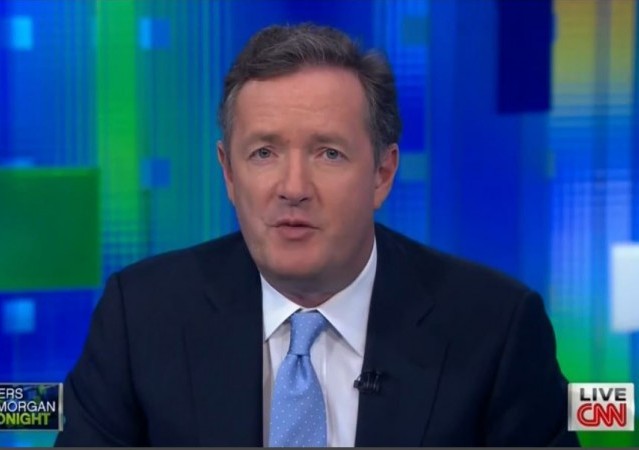 Posted by Bryan Jacoutot on February 24, 2014 28 Comments
Piers Morgan is used to telling people to get off his lawn. Now CNN is telling Morgan to get off its lawn. CNN has confirmed that Piers Morgan’s 9pm show, Piers Morgan Live, is coming to an end. The exact date of the final show has not yet been determined. Although news of the prime-time shakeup came without much warning, it could hardly be called unexpected given Morgan’s increasing disconnect with his American audience. In breaking the story on Morgan’s departure from the 9pm slot, David Carr at the New York Times first offered the following explanation:

Morgan agreed, but felt his personal anti-gun agenda might also have played a factor.
Read More

Posted by William A. Jacobson on August 05, 2013 35 Comments
NBC is preparing a Hillary Mini-Series. While we don't know the content, it's predicted that it will be favorable to her. The RNC is protesting, sending a letter (embedded below) to NBC threatening no cooperation with NBC as to 2016 presidential debates:

I'm writing to you to express my deep disappointment in your company's decision to air a miniseries promoting former Secretary Hillary Clinton ahead of her likely candidacy for the Democratic nomination for president in 2016. As an American company, you have every right to air programming of your choice. But as American citizens, certainly you recognize why many are astounded at your actions, which appear to be a major network's thinly-veiled attempt at putting a thumb on the scales of the 2016 presidential election.... There's ample cause for concern. Executives and employees of Com cast, NBC's parent company have been generous supporters of Democrats and Secretary Clinton. David Cohen, Comcast's EVP, raised over $1.4 million for President Obama's reelection efforts and hosted a fundraiser for the president. Comcast Corp. employees have donated $522,996 to the president and donated $161,640 to Secretary Clinton's previous campaigns.... Out of a sense of fairness and decency and in the interest of the political process and your company's reputation, I call on you to cancel this political ad masquerading as an unbiased production. If you have not agreed to pull this programming prior to the start of the RNC's Summer Meeting on August 14, I will seek a binding vote of the RNC stating that the committee will neither partner with you in 2016 primary debates nor sanction primary debates which you sponsor.

According to Breitbart.com, a similar letter was sent to CNN.  (Letter added below, h/t Andrew Kaczynski) The RNC also has started a petition drive aimed at liberal media pro-Hillary bias: 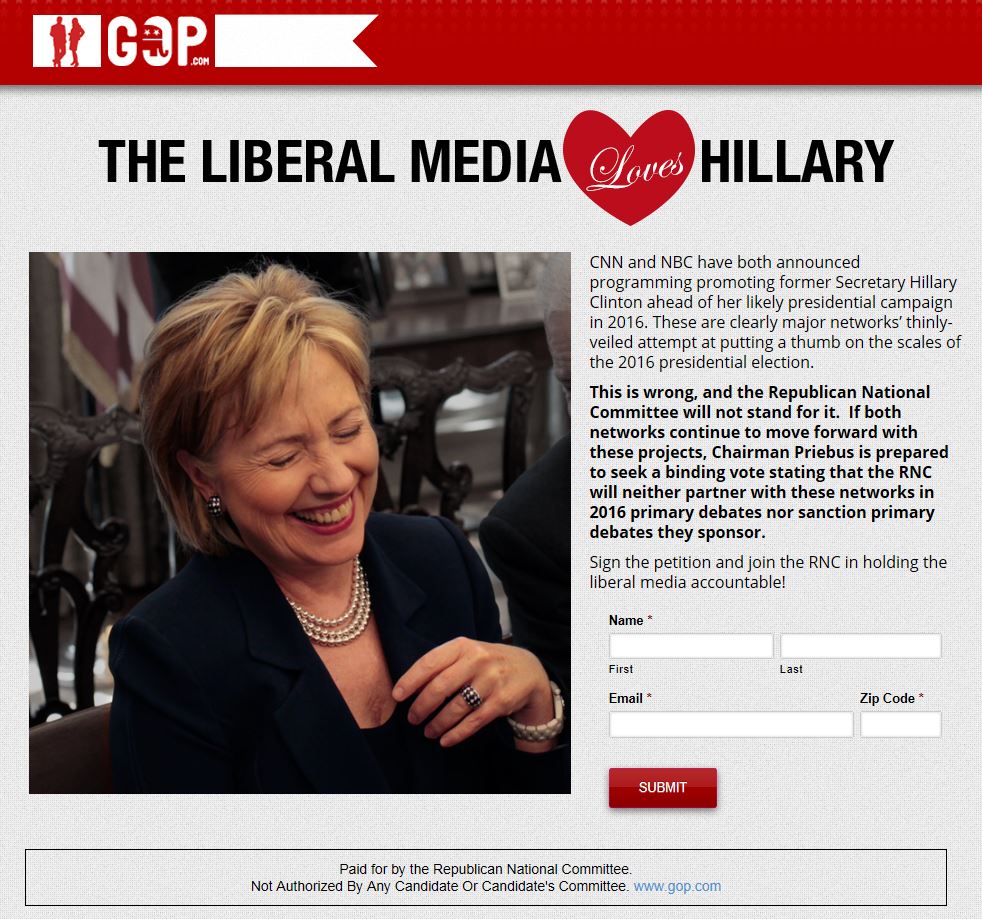 Fareed Zakaria suspended from CNN and Time for plagiarism “mistake”

CNN host and Time magazine contributor Fareed Zakaria has been suspended by both outlets after Newsbusters reported Friday he had plagiarized a column. It was Cam Edwards of NRA News who first noticed the irregularity; he then tipped off Tim Graham at Newsbusters. Tim Graham of...