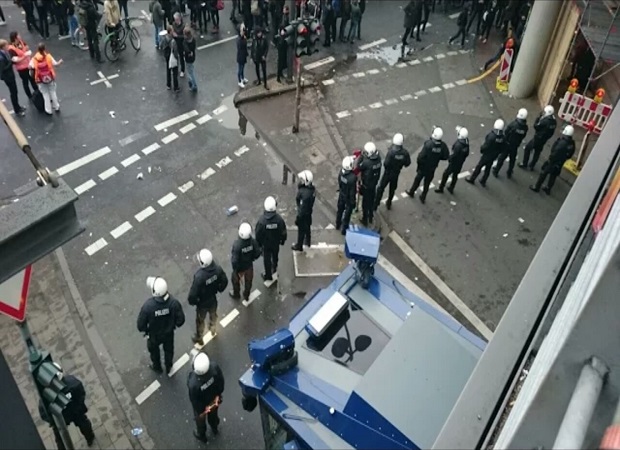 Dresden Mosque Bombing: Is Germany sleepwalking into a civil war?

Posted by Vijeta Uniyal on September 28, 2016 11 Comments
The migrant crisis that began almost a year ago is threatening to take a violent turn after this week’s bombings in the eastern German city on Dresden. On Monday evening, two bombs exploded near a mosque and city's main convention centre. Early next week, the convention centre would be hosting an event expected to be attended by high-profile guests including Germany's President Joachim Gauck. German Chancellor Angela Merkel is also going to visit the former East German city of Dresden on the same day to mark the German Unification Day. According to German media, no one was injured in the explosions. Local police suspects a Far-Right group to be behind the incident. "[Dresden Police] have reason to suspect a xenophobic motive," City's police chief Horst Kretzschmar told the press.
Read More

Posted by Miriam Elman on August 06, 2015 6 Comments
After a murder and multiple stabbing at the Jerusalem Gay Pride Parade last Thursday, by an individual who perpetrated an attack a decade ago, the anti-Israel movement has kicked into high gear. There is a concerted effort to undermine an indisputable truth -- Israel is the safest, most-welcoming, most open society for LGBT individuals in the Middle East. The term "Pinkwashing" is a growing part of the anti-Israel movement's attack on Israel, by claiming that Israel promotes its positive gay rights record in order to (pink) wash its alleged crimes against Palestinians. (There also are Greenwashing and Redwashing claims made against Israel.) The pinkwashing movement, which has a particular hold among anti-Israel students and faculty on campuses, seeks to turn Israel's positive gay rights record into something bad. The pinkwashing movement is nearly silent, at the same time, on the plight of Palestinian gays, who are relentlessly persecuted and often flee for their lives. This latest effort to exploit the Jerusalem Gay Pride Parade attack, however, is even worse. Call it "Reverse Pinkwashing," seeking to use an isolated incident to deny the truth about Israel's gay rights record in order to wash away the violent and pervasive persecution of LGBT individuals in Palestinian society. Below I examine the crime, the Israeli gay rights record, the dismal status of gays in Palestinian society, and the Reverse Pinkwashing exploitation in the wake of the attack.
Read More
Announcement
TV early SUNDAY MORNING -- Professor Jacobson will be on FOX AND FRIENDS at 6:30 a.m. Eastern, talking about our Saving Higher Ed From Cancel Culture event.
DONATE