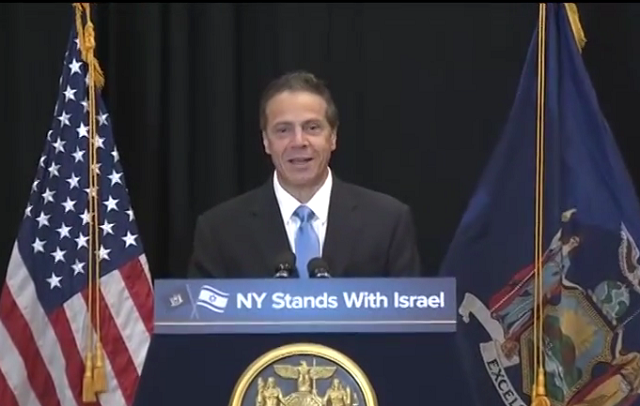 Posted by Fuzzy Slippers on June 05, 2016 10 Comments
Despite heavy campaigning against this move by the misnamed Jewish Voice for Peace, New York joins the growing number of states to divest public funds supporting the BDS movement against Israel. In an executive order, Governor Cuomo takes a "first-in-the-nation action [to] ensure that no state agency or authority engages in or promotes any investment activity that would further the harmful and discriminatory Palestinian-backed Boycotts, Divestment and Sanctions (BDS) campaign in New York State." From the Governor's office:

Governor Andrew M. Cuomo today issued Executive Order No. 157 directing state entities to divest all public funds supporting the Boycotts, Divestment and Sanctions campaign against Israel. The first-in-the-nation action will ensure that no state agency or authority engages in or promotes any investment activity that would further the harmful and discriminatory Palestinian-backed Boycotts, Divestment and Sanctions (BDS) campaign in New York State. The Governor made the announcement at the Celebrate Israel Parade.

Posted by William A. Jacobson on January 29, 2014 3 Comments
We previously have mentioned that the Speaker of the NY State Assembly, Sheldon Silver, is backing an Assembly bill barring use of state funds to support participation in organizations -- such as the American Studies Association -- that conduct academic boycotts, and cutting off state funding for higher education institutions that violate the prohibition. Silver's backing virtually guarantees it will pass the Assembly. Now the NY State Senate has passed a similar, but not identical, bill, as reported by Capitol Confidential:

The state Senate by an overwhelming majority voted for a bill introduced by Sen. Jeff Klein that would prohibit any public or private college or university from using state funds to support through funding any academic entity “if that academic entity has undertaken an official action boycotting certain countries or their higher education institutions.” The bill is in reaction to the American Studies Association’s controversial boycott of Israel over that nation’s treatment of Palestinians. While almost entirely symbolic, the ASA’s action is viewed by Israel’s supporters as a potential camel’s nose under the tent (if you can say that about a controversy involving the Middle East) for broader divestment efforts. Klein amended his original bill, which would have used the bazooka-vs.-fly approach of denying all state funds to any school that supported such an organization. The revised bill includes several carveouts: