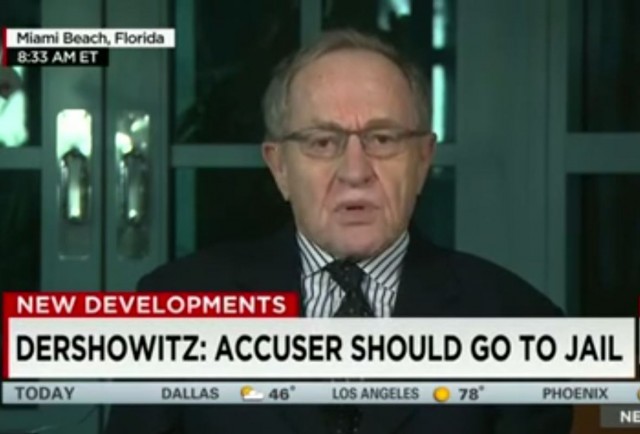 Posted by William A. Jacobson on January 06, 2015 45 Comments
Alan Dershowitz, along with others including Prince Andrew of Britain, were accused in a court filing involving convicted sex offender Jeffrey Epstein of participating in forced sex with a 17-year old. The court filing was not criminal, and was not even under oath. It merely was a motion suing prosecutors for agreeing to a light sentence for Epstein, without any evidence accompanying the allegations. I'll let you in on a not-so-secret lawyer secret: When you want to smear someone without having to back it up, just put it in a court pleading. Statements made in court pleadings are absolutely privileged, meaning you can't be sued for them. If you make the statements out of court, for example in a press release, then you can be sued. If you make the statements under oath, you could be subject to criminal prosecution. But keep it in the court pleadings, and you likely are home free. Step two in the tactic is to make sure the media picks up on the court pleading, so that the smear gets out into the public domain while your hands are clean. In high profile or celebrity cases, local media typically will be alerted to new filings either from routine checks or a tip off from the clerk. If all else fails, the tactic may require a nod and a wink to local reporters by the lawyer. It is the perfect smear tactic, which leaves the target short on options. The target is not a party in the case, and has no right to clear his or her name in the court case. All that is left is public denials that the accusations are false, but that also helps to spread the accusations.
Read More

Alan Dershowitz offers commentary on the Arab-Israeli conflict, and Glo Smith talks about the race for Florida's 5th District....

Sometimes what comes around, goes around. The Washington Times is reporting that the Florida Commission on Ethics has launched an investigation of controversial State prosecutor Angela Corey over her firing of IT director Ben Kruidbos in the aftermath of the prosecutorial debacle that was the George...