“A renowned expert on Israel-India relations, Uniyal is also the founder of “Indians 4 Israel,” the leading Indian pro-Israel group online.” 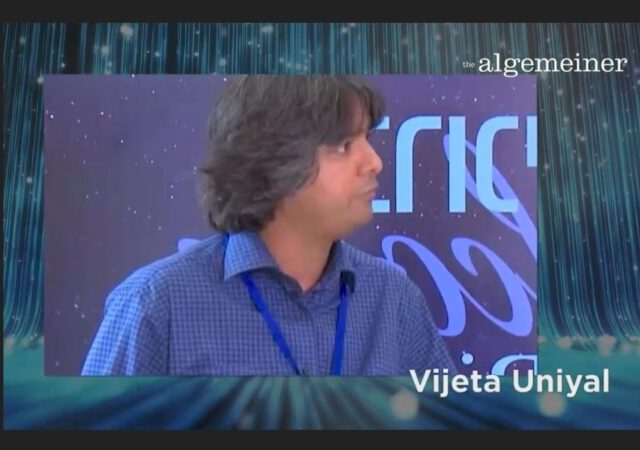 The Algemeiner “was founded in 1972 by famed journalist Gershon Jacobson as Der Algemeiner Journal and was originally published in Yiddish.” It’s one of the leading “Jewish” publications, more moderate in its politics than some others, and a source we frequently link to for matters regarding the anti-Israel movement on campuses.

In recent years, Algemeinger has published its “J100” list, a list of 100 people positively influencing Jewish life. You don’t need to be Jewish to be on the list, and many are not.

Legal Insurrection has been well-represented on the list in past years, including Prof. Miriam Elman in 2018, and me in 2019.

This year’s list includes another Legal Insurrection author, Vijeta Uniyal. Vijeta is an important part of the Legal Insurrection family, covering Europe (where his German language skills come in handy), the Middle East, and Iran.

You can read the full list of The Top 100 People Positively Influencing Jewish Life, 2020:

In honor of The Algemeiner’s seventh annual gala, this time held virtually, we are delighted to unveil our seventh ‘J100’ list of the top one hundred individuals who have positively influenced Jewish life this past year. Before you work your way through this exciting list, we wanted to first share some of the thoughts that we discussed as we developed it. If we could group these ideas together, the first would be about creating lists, in general; then, what’s unique about lists and Judaism; some finer points differentiating our honorees from the organizations they lead; and important reflections on all those every day and anonymous-to-us heroes we also want to celebrate without ever knowing their names. And, of course, to thank everyone who helped create the list and worked hard to put together our ‘J100’ gala.

Here’s the video released by Algemeiner of the list members. Don’t blink or you will miss some important people, including the person who immediatly precedes Vijeta.

Here is the entry for Vijeta:

Vijeta Uniyal is an Indian writer based in Europe. He graduated from the Jawaharlal Nehru University, New Delhi and worked for more than 10 years in international organizations including the German Foreign Office, Goethe-Institut and Humboldt-Foundation. He is a regular contributor for the Legal Insurrection blog and a Distinguished Senior Fellow of the Gatestone Institute. A renowned expert on Israel-India relations, Uniyal is also the founder of “Indians 4 Israel,” the leading Indian pro-Israel group online. 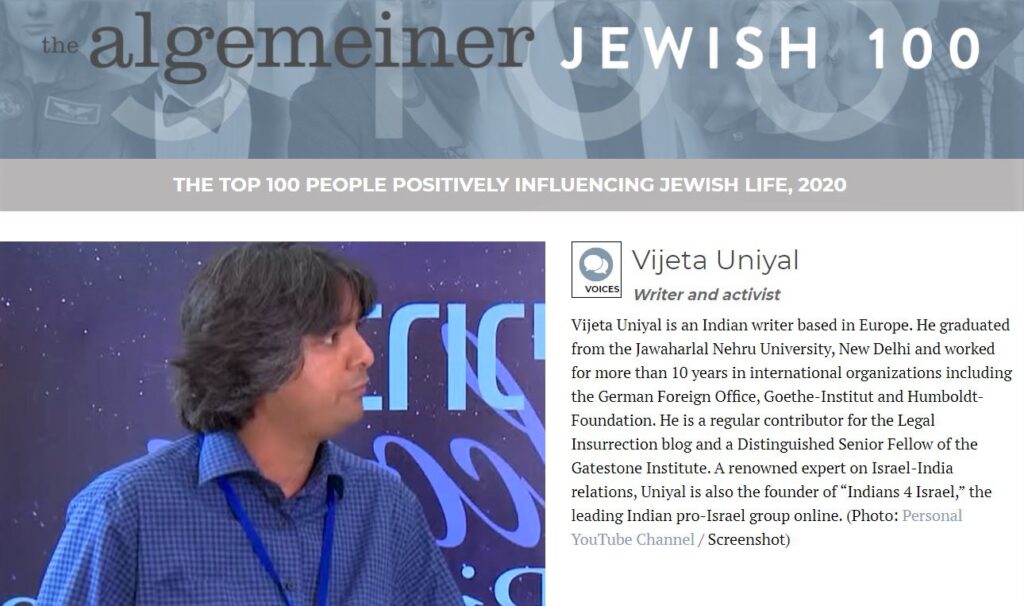 Vijeta is collecting medals like an Olympian, recently having been named to Top 40 Global Advocates for Israel Online.

After graduating with a degree in German studies at university in New Delhi, Vijeta spent a decade working for German governmental organizations. These organizations were located both in India and abroad and included the German embassy, the German foreign trade agency, Goethe Institut, and Humboldt Foundation.

Vijeta’s study of German history and literature acquainted him with the Holocaust, and, more generally, the European persecution of Jews.

“I moved to Germany in 2012 and witnessed unbridled Antisemitism for the first time in my life on the streets of Cologne city in wake of the Gaza conflict of 2012,” Vijeta recalled. “Since many of the openly antisemitic people I saw were of immigrants like myself, I felt compelled to do something. I started a blog and took to social media. The support and encouragement I got from my community led to the creation of the social media initiative ‘Indians For Israel.’”

Despite taking this courageous stand, Vijeta wrote, “I did not know any people of Jewish faith or Israelis before I began organizing for Indians4Israel at the grassroots.” He had studied parts of the Hebrew Bible, which, “enhanced my affinity toward the Jewish faith and civilization.”

Everyone at Legal Insurrection extends our congratulations to Vijeta for yet another prestigious recognition.

Congratulations and thanks to Vijeta Uniyal!

Prof J has a singular ability to identify and attract talent that the rest of the blogosphere has to envy. Vijeta is a prime example. We’re all blessed to have their insight.
.