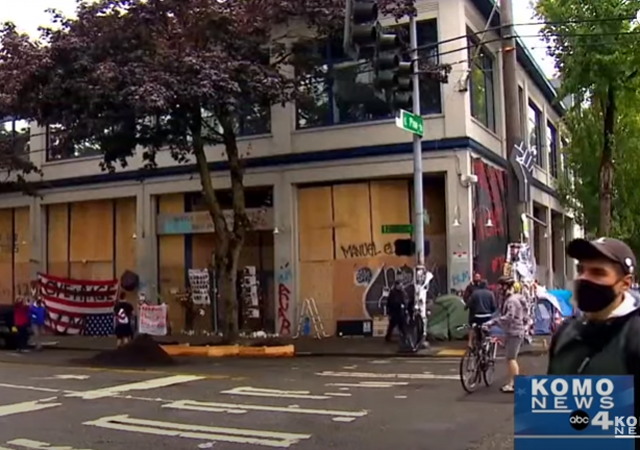 Seattle is about to try a new form of community policing which would have criminals face a non-profit community panel and in some cases, put taxpayers on the hook for restitution.

The left said they wanted to ‘reimagine’ law enforcement. Consider this a preview.

Seattle experiment says no jailtime for crime, but has taxpayers split bill

Under an experimental program in King County, first-time criminals will not see jail time for crimes, nor pay restitution. Instead, the suspects get a pass from any jailtime or record, with the “community” choosing the punishment. Plus, as an added bonus, county taxpayers will quite literally pay for the crimes.

It’s the latest scheme from King County Prosecutor Dan Satterberg to give a pass to criminals, while giving himself the ability to ignore his job. And even though these crimes disproportionately occur in Seattle, it’ll be the entire county that pays…

Under the “restorative justice” program, non-violent, first-time felons will face a non-profit community panel to decide how the offender will be held accountable. But Satterberg won’t define what he means by accountability.

“We can send that person instead (of jail) to a community accountability group, who will define what they think accountability means,” Satterberg told KOMO TV.

It is amazing to think there are taxpayers in Seattle who would put up with this part:

The victims of these crimes do get to recover stolen or destroyed property. We will all have to pay for it, rather than the criminal.

“Sometimes it can take years before restitution is paid to a victim and the person responsible may repeatedly come back to court when they don’t pay,” Satterberg told KOMO. “The reality of the situation right now is, victims are not being taken care of. This will help us take care of their immediate needs to a cap of, say, $500.”

Has everyone in Seattle lost their minds?

Total destruction of a beautiful, once great American city. An absolute tragedy.

I can’t comprehend the mentality of the people who live in Seattle who accept policies like this. What do they think the outcome will be?

I can see the nut jobs on the Minneapolis City Council wanting to try this.

Yes, locking people up is costly, but they will likely find that it is more costly to let them get away with their crimes. The purpose of locking up criminals should not be to make them feel good about themselves, but to punish them for the crimes they commit.

Also from the linked article: Satterberg told KOMO “The reality of the situation right now is, victims are not being taken care of. This will help us take care of their immediate needs to a cap of, say, $500.”

So, the DA who’s brainchild this program is, wants to take tax dollars that were ‘de-funded’ from law enforcement, and hand it out to the victims. I don’t think it is really the responsibility of the government to ‘take care of’ the victims at taxpayer expense. Government’s responsibility in the process should be to arrest, prosecute, and punish the criminal instead of abusing taxpayers by diverting their tax dollars.

And who is going to determine the make up of this ‘community accountability group?’ What are going to be the qualifications? By what legal authority is this group going to sit in judgment of felony offenders and mete out punishment?

Look, the whole premise here is total BS. I worked within the criminal justice system for over three decades. And here is the straight skinny.

Almost NO ONE is ever sentenced to jail for a non-violent crime. No one. Most defendants receive probation or enter diversionary programs. It literally takes at least a three-time loser to receive any jail time for a non-violent criminal act. Get it? If none of these people are going to jail anyway, for non-violent crimes, why should we change anything at all. I have seen young adults sentenced to probation multiple times for burglary, which most states actually classify as a violent felony, exactly who are we going to be releasing through these panels?

This is all a scam or, worse, total insanity. The sane individuals in this country have got to wake up and deal with the insanity running amok among us.

“The purpose of locking up criminals should not be to make them feel good about themselves, but to punish them for the crimes they commit.”

More to the point, there are three objectives to imprisonment: punishment, quarantine, and hopefully reformation. People keep forgetting quarantine — society has an interest in protecting its members from known predators by taking them out of circulation. That is very “affirmative for people’s lives” — that is, the innocent people who should be at the top of her list of concerns, not the people who routinely victimize them.

it’s not affirmative for people’s lives
THAT’S THE ENTIRE POINT, numbskull! The cult of self-esteem nears its pinnacle.

If this schmuck actually runs that scam here’s a “community accountability group” model for the Good citizens to adopt themselves- take a tip from when California actually had Americans running it & resurrect local Committees of Vigilance. That oughta offset “Prosecutor” Satterberg’s spineless pandering to the overly-vocal unAmerican panty wastes that he appears to fear much and prompt these “first-time felons” (read: 1st time the scum couldn’t plead out to a misdemeanor or use some ineffectual ‘program’) to think twice about plying their trade in those locales.

with the “community” choosing the punishment
Isn’t that what they’re already doing? What with sentencing laws and such? (Of course, what they really mean is “the radicals in the community” will decide.)

The population of Seattle sways the entire state left in every election.

This would be the punishment I would choose for them.

Folks, maybe I missed it, but I am surprised that no one here sees this for what it is: The first step toward Cuban-style “block committees.”