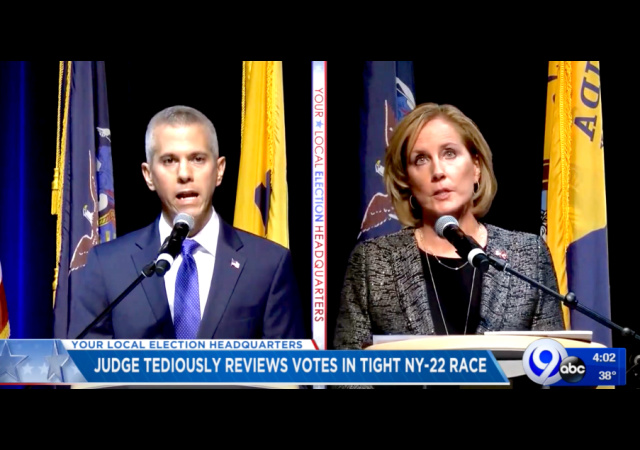 You honestly did not think New York’s 22nd Congressional District would go without drama before both sides filed more court motions on Wednesday and attend a court session next week, right?

Because of course, it didn’t!

Republican challenger Claudia Tenney is ahead of Democratic incumbent Rep. Anthony Brindisi by 12 votes in the race for New York’s 22nd Congressional District.

This is particularly interesting because they're early votes, which we don't have independent data for. If they mirror the in-person Election Day voting, should help the Republican @claudiatenney. If they mirror the absentee/affidavit results, will help Democrat @RepBrindisi.

Chenango County Elections Commissioner Carol Franklin told syracuse.com all of the newly discovered ballots were affidavit ballots submitted during the state’s nine-day early voting period. Franklin said she had no explanation for why the ballots were not counted.

“My guess is they came in early and they were put aside and mislaid,” Gordon told syracuse.com, adding that county election officials did not provide him with any more details. “I would hope that we could open them tomorrow with representatives present from each campaign.”

Gordon asked DelConte for direction on how to proceed. The judge had previously told each of the eight counties in the 22nd Congressional District not to amend the official vote totals submitted to the court on Monday.

Until the 44 ballots are opened, it will not be known which candidate benefits from them. But those ballots should have been among the in-person votes counted on Election Day. Those who voted in-person at the polls overwhelmingly favored Tenney. She led Brindisi by more than 28,000 votes that day. The gap narrowed to 12 votes after absentee and affidavit ballots were counted.

November 24: #NY22 candidates separated by only 100 votes because Post-It notes fell off counted contested ballots. Oh, then they couldn’t find the 100 ballots. DelConte said, “We have a serious problem on our hands.”

Before Thanksgiving: Brindisi led Tenney by 13 votes, which were not “official, certified vote counts.” Democrats and Brindisi tried to claim victory.

November 30: Herkimer County discovered “an error in its unofficial vote count.” Tenney got 35 more votes while Brindisi got 10.

Lawyers for Brindisi and Tenney received a delay from DelConte in regards “to file legal documents in the case over disputed ballots.” This happened before the county found the 55 votes.

They should NOT be counted.

…keep in mind all mail ballots, both coming and going are completely out of the chain-of-custody twice for each ballot.

Which is why Vote By Mail is and has always been a strategy for fraud and nothing else.

Nope. The claim is that they were in the custody of the board of elections the whole time. The only question is why we should believe this.

Until the Conservatives take a page from the dem playbook, they will continue to lose. But they lose with grace and dignity.

Why after a couple more years a Republican will never win, oh the night of the election they will be ahead but by next morning the lost, mail or new ballots will always be found.