“The image is real, but claims that the hat was anything more a gift or that Psaki was with Russian officials in any capacity beyond her official role are MISSING CONTEXT,” the USA Today claimed in a fact check. 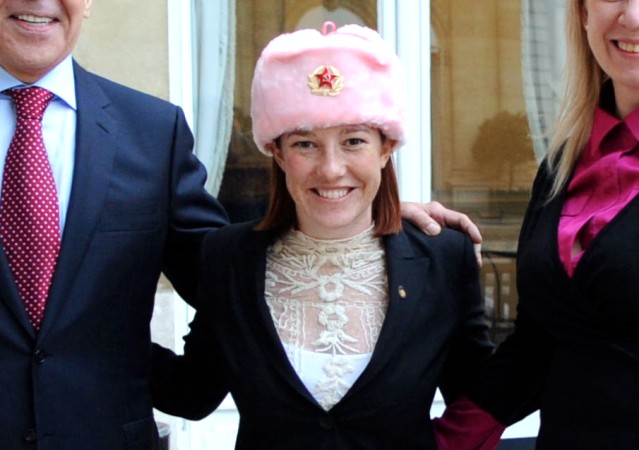 Over the weekend, Democratic presidential nominee Joe Biden and his vice presidential running mate Kamala Harris announced an all-female senior White House comms team, which predictably lead to much swooning and swaying from the usual suspects in the mainstream media.

In their announcement, Biden and Harris claimed that it was the first time in history that “these communications roles will be filled entirely by women.” As White House press secretary Kayleigh McEnany pointed out, it wasn’t true, but the media ran with it anyway because, of course, they did.

In any event, among those named to the senior White House comms team was Jen Psaki, who will fill the press secretary role (assuming Biden and Harris are certified as the winners next month). Ms. Psaki is an alum of the Obama-Biden administration, where she was the comms director for the last two years of Obama’s presidency. Before that, Psaki served in various press secretary roles under President Obama, including a spokesperson for the State Dept.

Psaki’s time as a State Dept. spokesperson has come under scrutiny from Republicans, particularly related to a 2014 photo of Psaki wearing a hammer and sickle fur hat.

I mean, she thanked them pic.twitter.com/wX4v7CUrrE

Just to confirm it was a real tweet, here’s an old-style retweet of it from the official archived account of Obama’s then-deputy national security advisor Ben Rhodes:

#shapkadiplomacy MT @statedeptspox Thanks to Maria, my Russian counterpart, for preparing me for upcoming #Olympics pic.twitter.com/B1EdnMfhNx

Russia responded w/ #Ushanka Hat gifted to @statedeptspox to stay warm&fancy during #US #winterstorm up to @Sochi2014 pic.twitter.com/yPmWTxydyE

Psaki snidely responded to Wolking, and others’ criticism by tagging failed 2016 Democratic presidential nominee Hillary Clinton in a tweet as an example of a supposed victim of Russian propaganda efforts. She then proceeded to allege that people spreading the photo were “puppets of the propaganda machine”:

For anyone who hasn't been the target of Russian propaganda (cc: @McFaul @HillaryClinton) the purpose is to discredit powerful messengers and to spread misinformation to confuse the public. Anyone who repeats it is (unwitting or not) simply a puppet of the propaganda machine.

Her comment understandably did not go over well with some folks, including our own Prof. Jacobson:

"If you criticize me you're Putin's puppet" is a hell of a great start for Biden's spox. https://t.co/B934YrPxvC

You put the pink hammer & sickle hat on. If your argument is that you were duped into wearing it by the Russians so that they could exploit you as a useful idiot for propaganda purposes … Yeah, agreed. And that's the problem. You let that happen. https://t.co/OzoxTXceHt

You wore the hat, Jen. You didn’t have to. Saying you wore the hat is not misinformation. It’s a fact. This is gaslighting, at best. You may want to reasses who here was a stooge. https://t.co/QzNn9swtMe

Not surprisingly, some in the media rushed to Psaki’s defense, including the USA Today, which published a ridiculous “fact check” proclaiming that the picture was “missing context”:

The claim: A photo shows Jen Psaki, Joe Biden's pick for press secretary, wearing a hammer and sickle hat while posing with officials from Russia.

From their “fact check“:

Jen Psaki, recently named White House press secretary for President-elect Joe Biden, is seen in a 2014 photo posing with the Russian foreign minister and his spokesperson, along with then-Secretary of State John Kerry. She is wearing a pink hat with a hammer and sickle emblem, which was a gift from the Russians that she returned. At the time, Psaki was spokesperson for the U.S. State Department. The image is real, but claims that the hat was anything more a gift or that Psaki was with Russian officials in any capacity beyond her official role are MISSING CONTEXT.

Others were quick to fact check their fact check with some of their own:

This is not a "fact check."

USA Today is engaged in partisan editorializing to spin a damning photo of a Democrat.

Claiming there is "missing context" while in effect criticizing conservatives doesn't change that. https://t.co/DZEBaG9Rcu

Claim: "Fact-checkers" are nothing but spin machine shills for Democrats.

@USATODAY and @usatodayDC are total hacks.

"A photo of a woman doing exactly what is described needs more context, but Trump's campaign using America's national bird on a t-shirt is definitely Nazi symbolism."

My ruling: You're useless hacks. https://t.co/QykYlTlNLL

It’s all rather ironic considering all that Democrats and the media have tried to pull over the last four years with President Trump and the bogus “Russia collusion” hoax.

Breitbart provided a timely reminder Tuesday that this is not the first time “Obama officials raised eyebrows regarding Russian symbols”:

It’s not the first time that Obama officials raised eyebrows regarding Russian symbols. Former White House press secretary Jay Carney was mocked in 2014 after posters of Soviet propaganda were spotted in his home.

Move along, nothing to see here … right?

She could have said “It was a souvenir from the Russians. What did you think it would show?” After all, she supposed to be some sort of comms expert. Instead, this magical comms expert decides to promote Joe’s message of unity by turning it into a partisan attack. We knew Joe’s “unity” is a flaming, hypocritical farce, and she has just proved it.

Again, if she had a souvenir from the Germans with a swastika on it she would not have worn it and posed with it, unless it was as some sort of Halloween costume.

To the vile, callous and historically indifferent/ignorant Dhimmi-crats, communist symbols and regalia don’t represent an oppressive and evil sociopolitical system that has killed, tortured, oppressed and impoverished hundreds of millions of people; they are emblems of “radical chique” — a means of demonstrating one’s allegedly “cool” “revolutionary” bona fides. It’s how a photograph of Marxist thug, Che Guevera becomes a ubiquitous dorm room poster and t-shirt, among Dhimmi-crats.

I meant to write “radical chic,” above.

Ah Jen–a cute litle Commie Sack of Something or other that doesn’t smell so good. But at least Joe won’t be sniffing her hair.