Why are so many among the political elite engaged in incomprehensible, even suicidal, behavior? 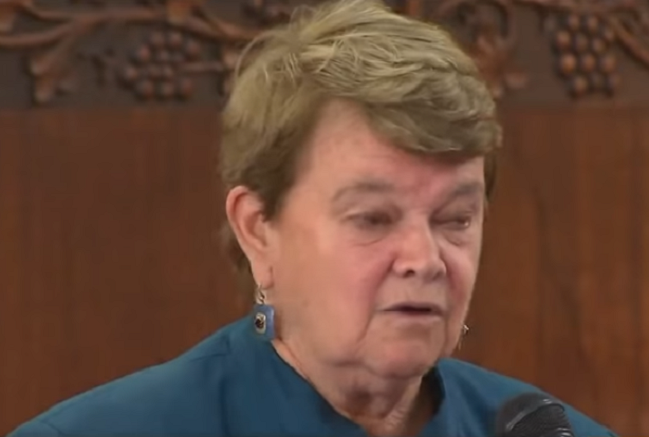 The Wuhan coronavirus lockdowns and mask orders are purportedly intended to protect people from getting and spreading the virus.

However, the trouble with this is the long (long) list of lawmakers, governors, mayors, and others in power who are issuing these job-killing, soul-destroying orders and then carrying on their own lives as if there is no deadly plague sweeping the planet.  Are they suicidal?  Homicidal, even potential serial killers? Or do they know something we don’t?

The latest of these was an LA County supervisor, Sheila Kuehl, who voted to ban outdoor dining, only to be seen hours later . . . dining outdoors at a restaurant.

Protesters gathered outside the home of LA County Supervisor Sheila Kuehl on Tuesday after a FOX 11 report revealed hours after she voted to ban outdoor dining she dined outdoors herself.

During Tuesday’s L.A. County Board of Supervisors meeting, Kuehl referred to outside dining as “a most dangerous situation” over what she described as a risk of tables of unmasked patrons potentially exposing their servers to the coronavirus.

“This is a serious health emergency and we must take it seriously,” Kuehl said.

A spokesperson for Kuehl provided FOX 11 the following brief statement:

“She did dine al fresco at Il Forno on the very last day it was permissible. She loves Il Forno, has been saddened to see it, like so many restaurants, suffer from a decline in revenue. She ate there, taking appropriate precautions, and sadly will not dine there again until our Public Health Orders permit.”

Setting aside the clear hypocrisy, the obvious question is: if dining outdoors is such a dangerous, health-threatening activity—a health emergency, why would Keuhl want to do it at all? Is it possible that she, and the many other politicians who defy their own lockdown and mask orders, aren’t worried? Not one bit?

What about San Jose mayor Sam Liccardo, who spent Thanksgiving with his parents despite the dire warnings that eating Thanksgiving dinner with your own family if they are not part of your household is a serious health risk? That grandmas the world over would be imperiled by such selfishness?

Mayor Sam Liccardo spent Thanksgiving at his parents’ home, apparently skirting health guidelines that urge the public not to gather with people outside their household. https://t.co/dc4Y6a4bOX

He wasn’t worried about the WuFlu or his family.  Weird, right?

Apparently, the many other political elites involved in such incidents since the lockdown hysteria began were not fearful, either. Here are just a few we’ve covered here at LI:

There are many more such instances of the political elite actively flouting their own rules, orders, and advice.  Even leftwing Newsweek called them out on their hypocrisy regarding riots (archive link).

At Powerline, John Hinderaker offers the following explanation for this otherwise incomprehensible, even suicidal (or homicidal!), behavior.

Gavin Newsom’s infamous dinner with lobbyists at the French Laundry is the latest example of a political leader who prescribes rules for the rest of us, and then flouts them himself. We have seen this over and over again, as Karol Markowicz reminds us (via InstaPundit.) She cites many examples of our supposed betters who hector us to wear masks, social distance, close down our businesses, avoid restaurants, associate with no one outside our immediate families, and so on, but who wouldn’t dream of limiting their own lives in such fashion.

Is this hypocritical? Of course. But that isn’t the most important point. The real significance of politicians flouting their own rules is that it shows they know those rules are unnecessary or useless. Take the case of Governor Newsom’s ritzy dinner. Newsom’s guests included the CEO of the California Medical Association, as well as that group’s senior vice president and head lobbyist. If these people–privy to all the latest scientific information!–actually believed that COVID is a deadly disease for people in normal health, and wearing masks indoors while social distancing and associating only with one’s immediate family would protect them from contracting it, you can be sure they would not have joined in the scofflaw dinner at the French Laundry. Not to protect you, but to protect themselves.

But they obviously don’t believe those things. Actions speak louder than words. The fact that our political leaders and other members of the alleged elite consistently flout the rules they lay down for the rest of us shows that they know those rules are bullshit. And if those rules don’t protect them, they don’t protect us either. That is the real point, more than the hypocrisy that is so obvious.

This seems far more likely than all of these self-absorbed politicos believing that they are putting themselves—and their families—at serious risk for a meal, haircut, or schmoozefest.

What a swine, huh?

So when the vaccine for the China Virus becomes available, will we have to show our ID and give other information, or will the procedure for being given the vaccine use the same “How to run an Election” playbook?

My new favorite superhero is SniperKaren.

Here’s another one caught red-handed: https://www.statesman.com/news/20201202/austin-mayor-stressed-residents-lsquoneed-to-stay-homersquo-he-was-vacationing-in-cabo-at-time?template=ampart&__twitter_impression=true&fbclid=IwAR3o3IEVJJWh-5hwnOUm9FRStHTk9Jcqqa9Qx1ZtptGvEZ7ZVG1Ek-HYPr0

“Why are so many among the political elite engaged in incomprehensible, even suicidal, behavior?”

The rules simply don’t apply to them, and they know it. There is nothing incomprehensible or suicidal about it.