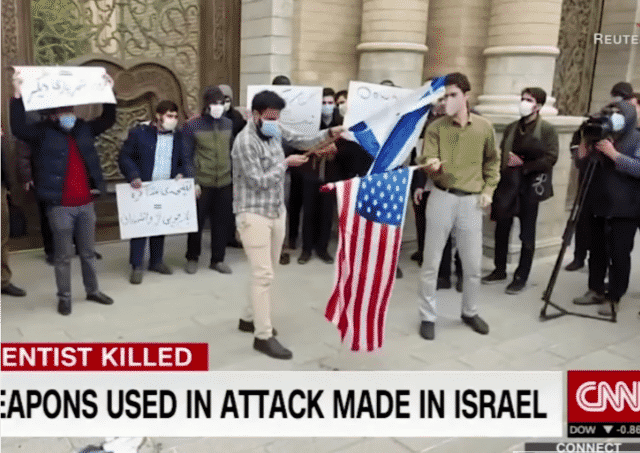 The Iranian regime has revised how the country’s nuclear weapons chief was assassinated outside Tehran.

Mohsen Fakhrizadeh, also known as “the father of the Iranian bomb,” was killed in a targeted attack near the Iranian capital last Friday.

After days of claiming that its top nuclear mastermind was killed in an ambush involving an explosive-laden truck and several gunmen, Tehran now says that remote-controlled devices assassinated him. A “remote-controlled machine gun” or weapons “controlled by satellite” were involved in the attack, the Iranian state media now maintains.  Pinning the blame on Israel, Iran claims to have found equipment bearing “the logo and specifications of the Israeli military industry” from the attack scene.

Iran had previously issued the photos of four alleged gunmen, or “Zionist mercenaries” as the regime labeled them, involved in Friday’s incident.

Despite blaming Israel, the regime could not conceal that the attack could have been linked to some of the domestic groups fighting the Islamic regime.

“The enemy knows full well that he cannot commit a crime without getting a response from the Iranian people,” Iranian Defense Minister, Amir Hatami, admitted.

The Associated Press on Monday reported the changed Iranian narrative on the high-profile killing:

A top Iranian security official on Monday accused Israel of using “electronic devices” to remotely kill a scientist who founded the Islamic Republic’s military nuclear program in the 2000s.

Ali Shamkhani, the secretary of the country’s Supreme National Security Council, made the comment at the funeral for Mohsen Fakhrizadeh, where Iran’s defense minister separately vowed to continue the man’s work “with more speed and more power.” (…)

Shamkhani’s remarks drastically change the story of Fakhrizadeh’s killing, which took place Friday. Authorities initially said a truck exploded and then gunmen opened fire on the scientist, killing him and a bodyguard.

State TV even interviewed a man the night of the attack who described seeing gunmen open fire. State TV’s English-language broadcaster Press TV reported earlier Monday that a weapon recovered from the scene of the attack bore “the logo and specifications of the Israeli military industry.” State TV’s Arabic-language channel, Al-Alam, claimed the weapons used were “controlled by satellite,” a claim also made Sunday by the semiofficial Fars news agency.

None of the outlets immediately offered evidence supporting their claims, which also give authorities a way to explain why no one was reportedly arrested at the scene.

Fakhrizadeh was not some average Iranian ‘scientist’ as the mainstream media is portraying him. He belonged to the top brass of Iran’s Islamic Revolutionary Guard Corps (IRGC), a U.S.-designated terrorist group. The nuclear mastermind held the rank of Brigadier General in Iran’s foremost terrorist outfit.

It is impossible to give much credence to changing narratives coming out of Iran on the killing of Fakhrizadeh. Still, one thing appears to be clear: Tehran is busy building a casus belli for targeting Israel and its allies.

Following the incident, Iran renewed its threats against Israel. Iranian President Hassan Rouhani vowed revenge as he blamed ‘Israeli mercenaries.’ Iranian lawmakers kicked off their parliamentary session on Sunday with war-cries of “Death to America” and “Death to Israel.”

The terror threats are not limited to the Jewish State. Hatami warned Arab states that failed to condemn Friday’s killing.

“This will catch up with you someday,” he said.

Israeli intelligence services warn of Iranian terrorist attacks on the country’s embassies, citizens, and Jewish institutions around the world.

“Israel fears Iranian attack on Israeli tourists in UAE,” Israeli broadcaster Arutz Sheva reported citing the country’s National Security Council. Jerusalem was maintaining “the highest possible level of preparedness and vigilance for any unusual activity in the area of the mission, at the homes of families and at Jewish and Israeli community centers,” Director General of Israeli Foreign Ministry, Alon Ushpiz, said.

Iran and its proxies, mainly Lebanon-based Hezbollah, have the capabilities of carrying out such terrorist attacks.

“Iran and Hezbollah have targeted Israelis and Jews around the world on multiple occasions — including two deadly bombings at Israel’s embassy and the main Jewish community offices in Buenos Aires, in 1992 and 1994 respectively — and Israeli and Jewish sites are seen as prime targets for reprisals following alleged Israeli attacks,” The Times of Israel noted on Saturday.

Look at vile John Brennan and the rest of the useful idiot, jihad-enabling/rationalizing/excusing/whitewashing, Dhimmi-crat, Obama-Biden cabal, lamenting this genocide-enabling reprobate’s death, and, castigating Israel’s (presumed) laudable act. This idiot and his brethren evince more outrage over a terrorist’s death, than they do with regard to his regime’s repeated threats aspiring to genocide in “wiping Israel off the map.”

Those threats, and Iran’s history are why we should put an end to this by stomping Iran.

Of course it’s Israel. Who else is constantly threatened with extermination as soon as Iran gets a nuke?

I thought this action by Israel was well justified, carefully targeted, and minimized collateral damage. I’m surprised that Mossad doesn’t take out the Iranian dictator.