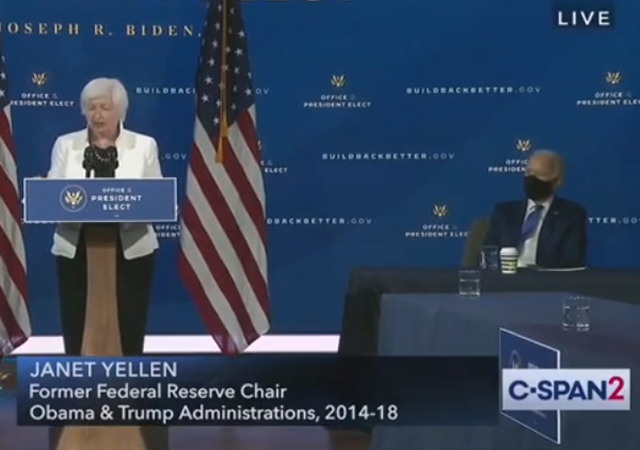 Former Federal Reserve Chairwoman Janet Yellen is Joe Biden’s pick to head the Treasury Department. During recent remarks, Yellen pledged to use the department to address many issues, including those of race, gender disparity,and the climate crisis.

The Democratic party’s approach to policy is now nearly indistinguishable from that of progressive activists on college campuses.

oe Biden has picked former Federal Reserve Chairwoman Janet Yellen to head the Department of the Treasury for his administration. During her introduction on Tuesday, Yellen promised to use the Treasury Department to address racial inequality, “gender disparities,” and “the climate crisis.”

Yellen said during the announcement in Wilmington, Del. that the COVID-19 pandemic, and the ensuing lockdowns, made problems worse for less fortunate Americans.

“So many people struggling to put food on the table and pay bills and rent. It’s an American tragedy. And it’s essential that we move with urgency. Inaction will produce a self-reinforcing downturn causing yet more devastation. And we miss — we risk missing the obligation to address deeper structural problems. Inequality, stagnant wages, especially for workers who lack a college education. Communities that have seen industry disappear with no good jobs replacing lost ones,” Yellen said.

“Racial disparities in pay, job opportunities, housing, food security, and small business lending to deny wealth building to communities of color. Gender disparities to keep women out of the workforce and keep our economy from running at full force. It’s a convergence of tragedies that is not only economically unsustainable but one that betrays our commitment to giving every American an equal chance to get ahead.”

President-elect Joe Biden announces his senior economic team, including Janet Yellen to be the first woman to head the Treasury Department. The appointments also include a number of liberal economists and policy specialists. https://t.co/dmq6DZivS2

She would be the first woman to ever hold the title of Treasury Secretary.

There is no one more qualified to lead the U.S. Treasury at this critical moment for American families.

Joe Biden is openly asking @Lin_Manuel to write a musical about Janet Yellen as the first woman to be Treasury Secretary.

Biden announced that he intends to nominate Janet Yellen to head the US Treasury Department.

Yellen made history in 2014 when she became the first woman chair of the Federal Reserve. Now she could make history again as the first woman Treasury secretary: https://t.co/7lW17p8JkX pic.twitter.com/h0vkttRznC

Yellen is another member of the permanent, unelected, bureaucrat class in Washington, DC.

In other words, the swamp.

Yellen, Yeltsin, something about phonics that souds too close.

Geitner money had “tax cheat” on it in protest, what will her cash get?

There is nothing that a secretary of the Treasury can or cannot do without Oversight and acquiescence from the president. So it is not all that surprising that Janet Yellen made those statements. I would expect the same from any cabinet nominee, and possibly even from anyone whom Biden hires to be a chef at the White House: incorporate dishes representing the many cultures of America, etc etc. But I would hope that Janet Yellen has been in the government long enough to know that there is such a thing as separation of powers, and that there are limits to what the President and Treasury can do by executive order and regulations, and that in the current environment transgressing those limits may result in an injunction in the courts or possibly a rebuke from Congress. E.g., trying unilaterally to forgive federally guaranteed debt would be difficult enough; trying to bias a program like that or to encourage home or business ownership in favor of one or another racial group would be slapped down quickly. Indeed, the set-asides for minority owned businesses already in the law are potentially vulnerable. And if Biden nominates any judges who say that they intend to use their judicial office to correct perceived inequalities, there is a high likelihood that they will not get confirmed, which begs the question of whether anyone whom he nominates for a judgeship will get confirmed if the Republicans still control the Senate, My own view being that as long as he avoids the lunatic fringe, he will draw the votes of Murkowski Collins and Romney and maybe a few others.

Prepare for more racial and sexual preferences and quotas for getting government loans. These quotas should be illegal by existing law, but they are ingrained into our financial system. For example, see:
https://www.mbda.gov/

It’s time to bring these racial and sexual preferences before the Supreme Court.

And there are nuclear options. President Trump is apparently exercising one currently in threatening to veto a military appropriations bill if the infamous section 230 of the Communications Decency Act, which insulates social media from liability for what gets posted, in not repealed. It’s difficult to make threats like this because you can end up cutting off your nose to spite your face and getting blamed for, e g., failing to fund the military, but there may actually be enough lefty House members who for their own reasons are upset with the power of companies like Google, Facebook and Twitter, that you could get majorities in Congress to change the law to remove the protection from defamation and to make any company that decides to censor anything responsible for those choices.

if the infamous section 230 of the Communications Decency Act, which insulates social media from liability for what gets posted, in not repealed.

If that were to happen say goodbye to this forum and all other ones. Prof J would not be able to keep it open. Nor could anyone. The big platforms could maybe do it; nobody else.