While You Were Focused on The Kraken, the Senate Continued Confirming Trump Federal Judges

While You Were Focused on The Kraken, the Senate Continued Confirming Trump Federal Judges

Long ago Mitch McConnell vowed to leave no federal judicial vacancy unfilled by the end of Trump’s first term. That promise is close to being kept despite Democrat and media outcry. 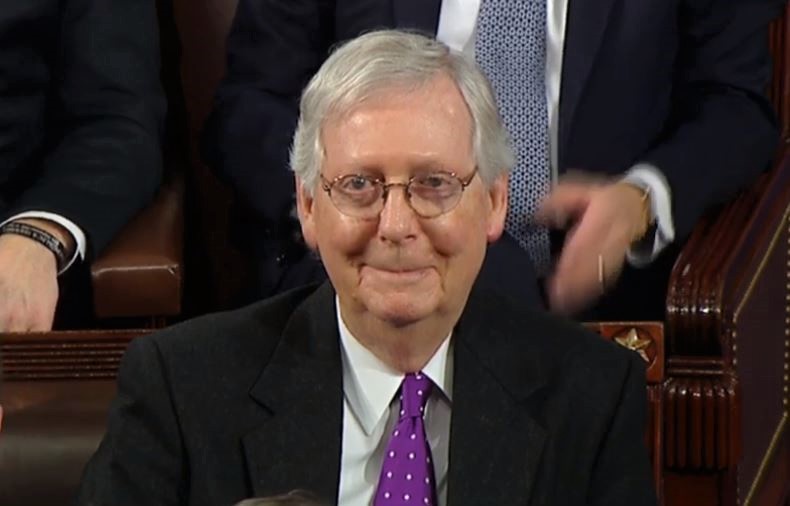 Mitch McConnell long ago promised to leave no federal court vacancy unfilled by the end of Trump’s first term. Depending on what happens in the next three weeks, this may be Trump’s only term and McConnell has continued moving judicial nominations through to confirmation.

Senate Republicans are racing ahead with post-election judicial confirmations, breaking a 123-year tradition against voting on judicial nominees of an outgoing president of the defeated party during a lame duck session.

Senate Majority Leader Mitch McConnell (R-Ky.) also wants to confirm Trump’s two remaining circuit picks whose nominations arose after Justice Amy Coney Barrett’s elevation to the Supreme Court from the U.S. Court of Appeals for the Seventh Circuit and the death of a First Circuit judge….

We’re going to run through the tape,” McConnell said to conservative radio host Hugh Hewitt after Barrett’s confirmation on Oct. 30. “We go through the end of the year, and so does the president.”

The next roll call votes are scheduled for Nov. 30.

The Senate on Wednesday confirmed lawyer Kathryn Kimball Mizelle to a lifetime judgeship on U.S. District Court for the Middle District of Florida in a 49-41 vote.

Why it matters: It’s the sixth Trump-appointed district judge the Senate has confirmed since Election Day, breaking with the body’s tradition against approving nominees of a lame-duck president.

The big picture: Democrats have criticized the Washington, D.C.-based lawyer’s record, arguing she has never tried a criminal or civil case as lead or co-counsel.

The leftist American Constitutional Society updates the scorecard as of today:

The Senate continued to advance and confirm judicial nominees this week, instead of dealing with the ongoing pandemic or the potential upcoming federal government shutdown. Five Article III judges were confirmed by the Senate: Kristi Johnson (S.D. Miss.) in a 53-43 vote; Benjamin Beaton (W.D. Ky.) in a 52-44 vote; Toby Crouse (D. Kan.) in a 50-43 vote; Stephen Vaden (Ct. Int’l Trade) in a 49-43 vote; and Kathryn Mizelle (M.D. Fla.) in a 49-41 vote. Mizelle, who is only 33 years old, was rated as “Not Qualified” by a substantial majority of the American Bar Association, in large part due to her lack of experience. Mizelle is the tenth nominee during this administration to receive a “Not Qualified” rating from the ABA. These confirmations bring the total number of Article III judges confirmed under this administration to 227.

On Wednesday, the Senate Judiciary Committee held a hearing for four Article III nominees: Thomas Kirsch II (7th Cir.); Charles Atchley Jr. (E.D. Tenn.); Katherine Crytzer (E.D. Tenn.); and Joseph Dawson III (D.S.C.). Kirsch II has been nominated to the Seventh Circuit Court of Appeals seat that only became vacancy in late October when then-Judge Amy Coney Barrett was elevated to the U.S. Supreme Court. The hearing primarily focused on originalism and how it applies in the seminal Brown v. Board of Education case.

After confirming the five judges this week, the Senate went on recess for the Thanksgiving holiday. However, before leaving for recess Senate Majority Leader Mitch McConnell scheduled a cloture vote for a district court nominee on the day the Senate is set to return from recess. Despite being in a lame duck session, it appears the Republican Senate majority will continue confirming judicial nominees up until Inauguration Day.

As of November 19, there are 55 Article III vacancies, 52 of which are current. Once the remaining nominees are officially nominated, there will be 30 pending nominees: 6 waiting for floor votes, 4 waiting to be reported out of the Senate Judiciary Committee, and 20 waiting for hearings before the Committee.

As of today, the 227 Article III (lifetime appointment) judges have been nominated by Trump and confirmed by the Senate, including three Supreme Court Judges and 53 Court of Appeals judges. The total will be over 250 by year end. That represents almost one-third if the authorized Article III judgeships. That represents a powerful pushback to the leftist activist tilt the judiciary has taken on, but is not the massive restructuring that a second Trump term would accomplish.

Unless The Kraken really is released, it appears this series of “While You Were” posts may be coming to an end soon. For the historical record:

“Senate Republicans are racing ahead with post-election judicial confirmations, breaking a 123-year tradition against voting on judicial nominees of an outgoing president of the defeated party during a lame duck session.”

Horseshit! Do they bother to check what they make up, or do they think we know nothing?

To take but one obvious example. On November 13, 1980, after he lost the election and conceded, President Jimmy Carter nominated David Breyer to a seat on the First Circuit Court of Appeals and Breyer was confirmed by the Senate, with more than three-quarters of the Republican Senators voting to confirm, on December 9, 1980.

Making stuff up is easier than actually going to Duck Duck (guess they use Google) to do a quickie search.

“…breaking with the body’s tradition”

Yah, bull. That’s a manufactured ‘tradition’. But if they’re so hep on tradition, the Senate used to have a tradition of comity between the parties; a tradition of deference to competence; a tradition of passing budgets; a tradition of being the ‘higher house’ of the Congress. But as Professor Jacobson wrote in an accompanying article, the Democrats have blown up and destroyed every norm that Congress – that Society itself – ever had.

It was the Democrats – Kennedy & Biden – who gave us the verb ‘to bork’.

The huge number of vacancies left by the indecisive Obama administration was done intentionally to disrupt the legal system. Mitch McConnell is a genuine American Patriot who is rectifying the wrongs on behalf of the American people who are bogged down and can’t get their cases heard or finalized because of the chronic shortage of Judges.

Once Biden starts appointing judges, I hope the Republican Senators will remember how the Dems treated Trump’s appointees. The Dems politicized the process, and generally voted against Trump’s appointments without considering their qualifications.

When Trump was elected, the Dems shouted “Not my President!” and “Resist!” So it’s time for the Republicans to give Biden the same treatment, and do their best to block his leftist appointments and the left-leaning laws he tries to enact. Turnabout is fair play.

This is why it’s so important to win at least one of the Georgia Senate seats in the runoff election, so McConnell can stay as Majority leader. GOP can block any far Leftist Judicial nominations by Biden-assuming he’s our next President. You have to play Defense in this game sometimes, and McConnell knows how to use the power of his Majority to stop the Dems.

Senate Majority Leader Mitch McConnell is a patriot and a learned man. He impresses me with his knowledge of how our Constitution works. I know a lot of conservatives don’t think he has done enough to support Trump, but he has confirmed almost 250 Federal Judges for President Trump and he stopped the SHAMpeachment cold in it’s tracks! I have a lot of respect for Senator McConnell, he’s a good man.