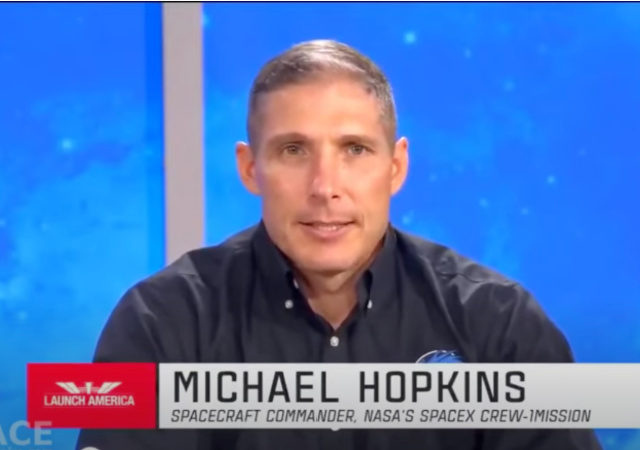 During President Donald Trump’s many rallies, his mention of the new U.S. Space Force always brings a loud round of cheers.

This new program’s fans have even more reason to be excited as we head into the election: Space Force will soon have its first service member in orbit.

According to SpaceNews, U.S. Air Force colonel and NASA astronaut Michael Hopkins is the commander of the four-person Crew-1 mission currently scheduled to launch to the International Space Station on a SpaceX Crew Dragon capsule on Nov. 14. He was already planning to transfer from the Air Force to the Space Force, and now Space Force leadership is hoping to commission him during a ceremony held in orbit.

…The Senate approved his transfer in July. Hopkins will become the first NASA astronaut within the Space Force; the military is a regular conduit of astronaut recruitment and the NASA corps includes retired or active members of most of the longstanding military branches.

Arrangements are being made for the commissioning ceremony to be held at the International Space Station (ISS).

“If all goes well, we’re looking to swear him into the Space Force from the International Space Station,” said Gen. John “Jay” Raymond, chief of space operations of the U.S. Space Force.

…Col. Catie Hague, a spokesperson for the chief of space operations, told SpaceNews that the service is working with NASA to schedule a transfer ceremony once Hopkins is on board the International Space Station.

Hopkins, like hundreds of other airmen who are now in the Space Force, is transferring voluntarily. He was selected by NASA to be an astronaut in 2009.

Hopkins would be the first member of the Space Force to serve in NASA’s astronaut corps. Hague noted that for more than 60 years, men and women from the Army, Navy, Marine Corps, Air Force and Coast Guard have helped fill the ranks of the astronaut corps. “The U.S. Space Force, as the newest military service, is looking forward to contributing to this legacy,” Hague said.

He went onto work with “advanced space system technologies” at Kirtland Air Force Base, N.M., graduate from the U.S. Air Force Test Pilot School’s flight engineering course, and test C-17s and C-130s as a member of the 418th Flight Test Squadron at Edwards Air Force Base, Calif., it notes.

His other pre-NASA accomplishments include training at the Defense Language Institute, studying abroad in Italy, supporting the Air Force Rapid Capabilities Office as a project engineer and program manager, and serving as a special assistant to the Vice Chairman of the Joint Chiefs of Staff.

Hopkins, a member of NASA’s 20th astronaut class, completed his Astronaut Candidate Training in 2011, according to his bio.

The SpaceX mission will be the second time he will be aboard the ISS.

We already know who Space Cadet #1 is going to be.

Tom Corbett? (The true codgers and coots will understand. BTW, the juvie books were believed written by Robert Heinlein under a pen name, Carey Rockwell.)
.

Let me know when the first Space Force recruit named Kirk is sworn in.

I was at an “undisclosed location” for a good part of this year. There were lots of Air Force personnel doing Space Force work there at the CAOC. They held a big transfer ceremony where the officers and enlisted members took their new oaths and transferred into the Space Force. Then I started seeing Space Force uniforms around base. Pretty cool to see that in person.

Just a minor detail that the Space Act doesn’t confer authority on NASA to utilize Space Force personnel as astronauts. Air Force, Army, Navy, Marine Corps, and Coast Guard are specifically specified as sources of military astronauts NASA may utilize. A technical correction bill needs to be rammed through since the NDAA wasn’t passed this year to handle this situation.