Trump Campaign: Sidney Powell “is not a member of the Trump Legal Team”

Trump Campaign: Sidney Powell “is not a member of the Trump Legal Team”

“She is practicing law on her own.” 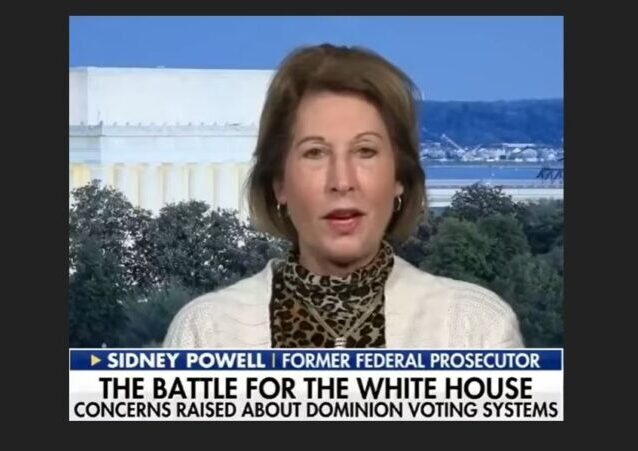 Lawyer Sidney Powell advanced what I characterized as a “a unified theory of election software and hardware fraud that spans numerous countries, possibly “three-letter agencies,” and an election night execution of a preexisting plan across several jurisdictions.”

The claim centered on alleged manipulation of Dominion voting machines to flip millions of votes from Trump to Biden. The obvious problem with such an assertion is that it required proof of involvement by many independent actors in many different locations acting in concert. Powell’s assertion was a grand conspiracy, in contrast to Rudy Guiliani’s claim to have affidavits and witnesses to specific acts of voter fraud (the problem with Rudy’s claims is that the remedy of disqualifying hundreds of thousands of votes because some of them might be fraudulent was not a remedy any court was likely to grant).

(added) Byron York points out how broad Powell’s accusations have become, asserting that some Republicans were in on the scheme.

Powell said Georgia GOP Gov. Brian Kemp is 'in on the Dominion scam.' Accused Kemp and GA Secretary of State of accepting financial benefits in conspiracy to defeat Trump. Evidence? 'I can't give you any more details.,' she said. From @newsmax 2/2 End. https://t.co/OAzEckDLzV pic.twitter.com/a3XWv4OJf5

I noted that the burden was on Powell to come forward with the proof:

But something being possible is not the same thing as proof that it did happen. Powell says she has proof it happened, but she offered no details today. It would shake our system to the core if such evidence exists and is provable, but I don’t think people should get their hopes up. Prove me wrong, please, I’m practically begging her to do so, but in the end, she is going to need proof, not conjecture.

It’s curious that earlier tonight the Trump campaign issued a statement distancing itself from Powell. Jenna Ellis, the campaign’s attorney, tweeted the statement:

“Sidney Powell is practicing law on her own. She is not a member of the Trump legal team. She is also not a lawyer for the President in his personal capacity.”

Since Powell appeared at a press conference with Ellis and Rudy just days ago, it’s hard to see how she was not viewed as part of the legal team. So the campaign statement likely reflects that whatever it was the campaign thought Powell had, she doesn’t.

You can only imagine the joy at this development among the same people who for four years told us Trump paid hookers to pee on a bed in Moscow because Obama slept in it, who was a Russian agent being run personally by Putin, and who was worse than Hitler. In addition to those miscreants, there are many Republicans running for the hills.

Lin Wood is standing by Powell:

Sidney Powell @SidneyPowell1 & I are more alike than we are different.

We are fighting different legal battles for the same clients – We The People.

I don’t know whether Powell has the proof. It’s possible, as some people speculate, that she’s holding everything close to the vest for court. But if that’s not the case, and she doesn’t have the proof, then she has done great damage to the legitimate concerns about voter fraud and weakening of voter security.

We will update if there are further developments tonight.

.@SidneyPowell1 has been suspended from Twitter for 12 hours. She understands the WH press release & agrees with it. She is staying the course to prove the massive deliberate election fraud that robbed #WeThePeople of our votes for President Trump & other Republican candidates.

Powell has issued a statement standing by her claims and promising to file suit soon.

Sidney Powell released this statement to @CBSNews and @kristincbrown after the Trump campaign said she's not on the team:

Sundance at CTH explained: This is all about who is getting paid by the campaign and RNC. The Trump campaign isn’t going to reimburse Sidney Powell for any expenses, nor is she allowed to make offers of financial payment from the GOP or Trump campaign. The vultures assembling and protecting their paychecks do not want Powell getting paid, nor do they want any financial liability. … That announcement is all about money; nothing more.

This is true. But all the state legislatures have already specified how their states electors are to be chosen, so by default they have no actual role in the choosing. It’s not as if they are going to be faced with the task of certifying their states’ electors; that is done by some other official whom the legislature has authorized (who it is varies by state).

It is true that the legislature can now change its mind and lay down a different method of choosing the electors, but that would run afoul of the federal statute and thus lose them its guarantee that their state’s electors’ votes will be counted on Jan 3.

If a state changes the rules now, and sends in a slate of electors that isn’t the outcome of the Nov 3 election, it would be up to Mike Pence whether to count those electors, and if he did count them there’d be a constitutional crisis like the one in 1876, because the constitution doesn’t say who decides which electors’ votes to count. All it says is that he must count them in the presence of congress, but whether they’re supposed to just be silent witnesses or to decide questions about the electors’ eligibility is unspecified, and was left unresolved in the compromise that solved that crisis.

In addition, no state legislature is going to do such a thing unless it has convincing proof that Trump really won that state. Without that, a state legislature that did so would be devastated at the next state election. The state’s people wouldn’t stand for it. And that proof is hard to find.

A good video to watch on this subject: https://www.youtube.com/watch?v=YYJUjkpjZbo

You want people to watch a 2-hour video because you say it’s good? Have you refilled your thorazine prescription lately, you nutcase? LOL

The steal would have required several things.
1. An up to date running count total.
2. An algorithm to forecast the net changes in vote count required for a Biden victory
3 A process to eliminate Trump votes electronically and ballots physically
4 A process to produce illegal votes for Biden electronically
and physically ballots.
Prerequisites. (Massive mail in ballots, lenient verification ,late receipt of ballots, extended counting times
I’m pretty sure we have evidence of all these things available to the general public.
How is it presentable and provable is beyond me. I hope its the Kraken!