Sen. Lindsey Graham Stands By Trump As Some Other Republicans Flee

Sen. Lindsey Graham Stands By Trump As Some Other Republicans Flee 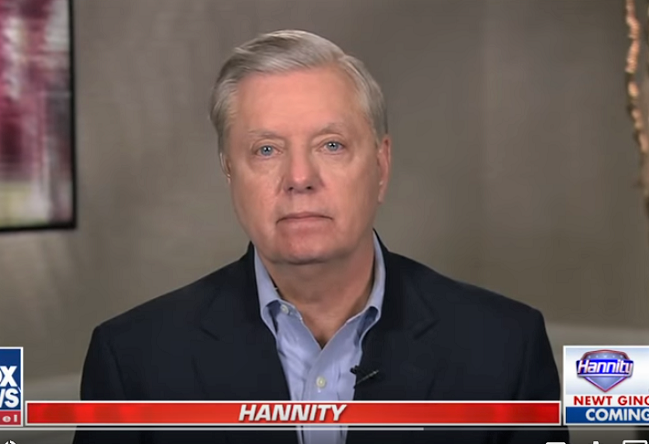 Apart from Sen. Ted Cruz, I hadn’t seen any Republican senators speaking out about the travesty taking place in the states still counting their votes. That is until Thursday night when Sen. Lindsey Graham appeared on Fox News and stated that he is donating $500,000 to President Trump’s legal fund.

Further, he urged every Senate and every House Republican to get on television and tell the story of “the allegations of wrong-doing” that “makes the Carter Page warrant application look on the up and up.”

Lindsey Graham is donating $500,000 of his own money to Trump's legal defense fund. He came through. https://t.co/jagwPewleb

“I’m here tonight to stand with President Trump,” Graham told Fox News’ “Hannity.” “He stood with me. He’s the reason we’re going to have a Senate majority. My race was overwhelming. He helped Senate Republicans, we’re going to pick up House seats, because of the campaign that President Trump won.

. . . . “Give to DonaldJTrump.com, so we will have the resources to fight,” Graham added. “The allegations of wrongdoing are earth shattering. It makes the Carter Page warrant application look on the up and up.

Amid calls from some the Republican Party is not vocally backing Trump’s election fraud challenges, Graham said “everything should be on the table.”

“There is the process of observing an election that’s being violated,” Graham continued. “Philadelphia elections are crooked like a snake. Why are they shutting people out? Because they don’t want people to see what they’re doing.

Graham is absolutely right about Trump’s coattails and how much Congressional Republicans owe their re/election to the president. Many, however, are instead clutching their pearls and chastising the president.

Republican lawmakers and officials are pushing back against President Donald Trump’s series of false claims Thursday night about the presidential election, although many did not mention him by name.

Shortly before Trump made baseless claims at a news conference about massive voter fraud in Pennsylvania, Sen. Pat Toomey, R-Pa., said in a statement that once the state’s final election count is “reached and certified, all parties involved must accept the outcome of the election regardless of whether they won or lost.”

. . . . The harshest pushback came from retiring Rep. Will Hurd of Texas.

“A sitting president undermining our political process & questioning the legality of the voices of countless Americans without evidence is not only dangerous & wrong, it undermines the very foundation this nation was built upon,” he said in a tweet. “Every American should have his or her vote counted.”

Rep. Adam Kinzinger, R-Ill., who at times has been a sharp Trump critic, also offered a strong rebuke.

“We want every vote counted, yes every legal vote (of course). But, if you have legit concerns about fraud present EVIDENCE and take it to court. STOP Spreading debunked misinformation,” he wrote. “This is getting insane.”

Maryland Gov. Larry Hogan was one of the few Republicans to mention whom he was talking about. “There is no defense for the President’s comments tonight undermining our Democratic process. America is counting the votes, and we must respect the results as we always have before. No election or person is more important than our Democracy,” he tweeted.

Sen. Mitt Romney of Utah, a vocal Trump critic who was the Republican presidential nominee in 2012, also called for patience in a statement he tweeted from his personal Twitter account.

“Counting every vote is at the heart of democracy. That process is often long and, for those running, frustrating. The votes will be counted,” Romney wrote, and if there are any “irregularities alleged, they will be investigated and ultimately resolved in court. Have faith in democracy, in our Constitution, and in the American people.”

Team Trump is also warning Republicans with presidential aspirations that their weakness now will be remembered by Trump supporters.

But Don Jr, who is thought to have political aspirations of his own, reserved his ire for those who may be eyeing up a presidential run in 2024.

He wrote on Twitter: “The total lack of action from virtually all of the ‘2024 GOP [Republican] hopefuls’ is pretty amazing.

“They have a perfect platform to show that they’re willing & able to fight but they will cower to the media mob instead. Don’t worry @realDonaldTrump will fight & they can watch as usual!”

The tweet was in response to one from Mike Cernovich, a men’s rights activist and Trump supporter, who had criticised the president’s former UN ambassador, Nikki Haley.

She is widely thought to be preparing a White House bid in 2024.

Mr Trump Jr continued: “Republicans have been weak for decades which has allowed for the left to do these things.”

His brother, Eric, tweeted: “Where are Republicans! Have some backbone. Fight against this fraud. Our voters will never forget you if your [sic] sheep!”

Where are Republicans! Have some backbone. Fight against this fraud. Our voters will never forget you if your sheep! https://t.co/jLzOIJbrwV

Losing fair and square is one thing but in the face of all of this video evidence, lack of transparency, boarding up of windows, fighting to prevent poll watching etc etc… for GOPers to not stand up now shows your true colors.

Will make the 2024 primary process a lot easier. https://t.co/GNC5OkVvf5

One notable exception seems to be Ron DeSantis right now. He has been active and vocal. @RonDeSantisFL

We all owe @realDonaldTrump for his leadership of conservative victories for Senate, House, & state legislatures. He and the American people deserve transparency & fairness as the votes are counted. The law must be followed. We have to keep the faith that the truth will prevail.

Thank you @Jim_Jordan and @RepScottPerry for fighting this corruption. You are both amazing. Unfortunately, not everyone is born with spine. 🇺🇸🇺🇸🇺🇸 https://t.co/DhUhV0HDSc

.@LindseyGrahamSC is a good man! Thank you for having spine! Fight this fraud! https://t.co/tLosUcTSZp

Yes. If a third party is the only way to go and I think it’s true, then now’s the time. Unfairly, the Republicans have been labeled as racists for a long time. Trump uniquely has much support with minorities. If he extracted himself from the Republicans he could convince more minorities to support him and a new party. There is a small window for this to occur. Minorities are listening to Trump and are becoming aware of how the Democrats have not delivered for them. Middle class people are also on Trumps side, so I think he could form a “Peoples” party and get much support. The Party could also back certain Republicans who decide to stay yet fit the Populist mold. Matt Gaetz comers to mind.

I had been looking at that before Trump, it was clear that both parties had become useless leaches.

Any RINO who jumps off and runs from this fight might as well call themselves a member of the NFL….which is also dead to many of us. The GOPe is going to unveil themselves over the next couple weeks and will pay dearly for it.

If Joe should “win”, I just want to see who the DNC will put in place as Harris’ VEEP – it just might be Congresswoman Ilhan Omar, D-Minn. – after they employ the 25th.

If it comes to Harris being president and choosing a VP, the DNC doesn’t get a say in the matter; it’s her choice, to be confirmed by a joint session of congress. The DNC’s last chance to intervene is Dec 14; until then they can change the ticket, though politically it would be difficult for them to justify doing it now.

They wouldn’t do it even if the politics was favorable. I guarantee they want 12 years of Harris governance, which they can’t get unless they wait 2 years to formally retire Joe. Harris will be acting President immediately, of course.

I truly have enjoyed your humor over several years now.
Harris ‽‽ pick her own VEEP????
To repeat, I really enjoy your sense of humor.