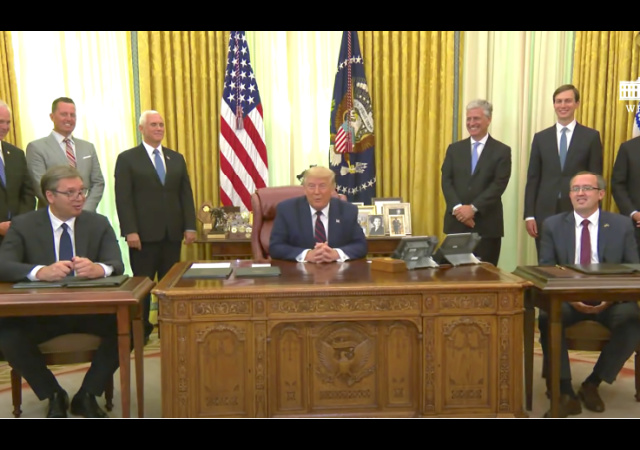 A petition making the rounds at Harvard seeks to prevent members of the Trump administration from doing pretty much anything at the school.

For an institution that’s supposedly dedicated to diversity and inclusion, they have a funny way of showing it.

Petition circulating at Harvard to stop former Trump administration officials from attending, teaching or speaking at the university

A petition circulating in the Harvard University student body seeks to ban Trump administration officials from teaching, speaking, or attending the institution because of their association with the president.

The petition, discovered by Fox Business’ Lydia Moynihan, represented the latest attempt to punish Trump associates. Students are demanding that if the university does associate with a Trump alumnus, they’ll “create and share with students transparent guidelines” for why.

Harvard, like other colleges, has been accused of censoring conservative viewpoints.

(1/3) SCOOP via @LJMoynihan: A group of @Harvard students is seeking to ban any Trump administration alum from attending, teaching, or speaking at Harvard, according a Harvard student with direct knowledge.

(3/3) In the event the university does associate with a Trump alum, they demand the school “create and share with students transparent guidelines” as to why that Trump official is allowed on campus. No comment from Harvard.

Here’s an excerpt from the petition:

After every presidential election, Harvard becomes a temporary home for officials from the outgoing administration. These bipartisan government connections allow the school to serve its student community better and to maintain ties, influence, and status with any administration.

We write to you now, in advance of the conclusion of the Trump administration, extremely concerned about the impact of the actions of this administration on fundamental democratic institutions. Most notably, in actively undermining faith in the electoral process and in refusing to concede the 2020 election, the Trump administration has trampled norms of free and fair elections and peaceful transfer of power that have defined our republic for over two centuries. These norms are crucial to the global well-being of democratic institutions. A complete disregard for the truth is a defining feature of many decisions made by this administration. That alone should be enough to draw a line.

We hold a variety of political views, but these actions alarm all of us invested in the future of democracy in the United States and abroad. We worry that in following tradition and inviting members of the Trump administration to Harvard, the school would be legitimizing this subversion of democratic principles that up to now had been universally accepted by both political parties. That is why today we are asking you to set up a system of accountability for high-level political appointees and Trump administration consultants before they are invited as fellows or to teach or speak on campus. These accountability guidelines should be publicly shared with students by the end of the calendar year.

Note that these students use the term “accountability” in their demands. Where could they have gotten that idea?

Obama killed American citizens with drones. Do you think his administration will ever be banned at Harvard?

We “hold a variety of political views”…ranging from leftist to far leftist.

I assume the Harvard administration is hiding in the nearest closet
so the “students” can’t find those.
They maybe should burn the effing place down with those students who are the “superior idiots” still inside it.