We’re still on Twitter and Facebook, but those are our past. Parler, and MeWe, and other emerging platforms are our future. Conservatives having an option is what the mainstream media and Twitter blue checks cannot stand. 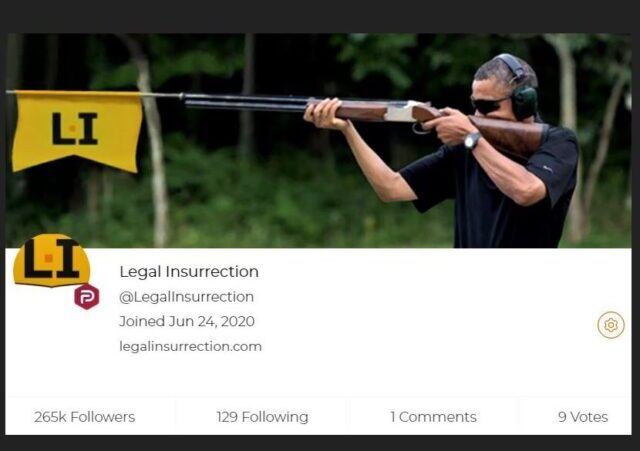 Have you noticed? The mainstream media is obsessed with Parler. Obsessed with trying to marginalize Parler, to be more precise.

Just in the past week there have been several articles in major publications trying to portray Parler as a home of the dangerous fringe of conspiracy theorists. That’s pretty ironic, since the platform these articles defend, Twitter, is a cesspool of anti-Trump conspiracy theories and has been for 4 years.

Nothingburger people who shout “traitor” on Twitter gain hundreds of thousands of followers, and previously lucid people like Harvard Law Professor Laurence Tribe have gone off the deep end for followers and RTs. Meanwhile, blue check journalists pat each other on the back for the latest fake anti-Trump scoop based on anonymous sources.

Yet marginalizing Parler is the goal, much as the way the media tried to marginalize the Tea Party.

Since the election, President Donald Trump and his allies have faced fact-checks, condemnation and restrictions when trying to spread inconclusive evidence of voter fraud and leftist violence on social media.

But over on Parler, there’s a new, millions-strong MAGA universe where conservatives are freely spreading these claims and reinforcing their belief that Democrats have stolen the election from Trump.

Hashtags on Parler denoting Trump’s favorite conspiracy theories — #Dominion, #Sharpiegate, #QAnon — trend freely, without the restrictions Twitter and Facebook have instituted to suppress them. Stories from fringe sites pushing baseless allegations of voter fraud are not flagged as disinformation, as they often are elsewhere. Videos from the Million MAGA March depicting heated confrontations between MAGA supporters, counterprotesters and D.C. police are shared as evidence of rampant antifa violence, omitting necessary context that would show otherwise.

Yeah, and on Twitter the Iranian Supreme Leader threatens to destroy Israel.

On the social-media app Parler, which has been gaining popularity among supporters of President Donald Trump, posts alleging electoral irregularities mixed with assorted hashtags decrying Fox itself: #BOYCOTTFOXNEWS, #DUMPFOXNEWS, #FAKEFOXNEWS, #FOXNEWSISDEAD, and #FOXNEWSSUCKS. Throughout Election Day, Facebook, Twitter, and YouTube had been cracking down on a flurry of allegations about voter fraud in Arizona; the platforms quickly applied warning labels to new posts containing false or disputed information and reduced the distribution of groups spreading them. In response, pro-Trump influencers exhorted their followers to congregate on Parler, which tells users to “speak freely and express yourself openly, without fear of being ‘deplatformed’ for your views.”

Sheera Frenkel at the NY Times ran a hit piece on Dan Bongino, an investor in and the public face of Parler, listing him as a “misinformation Superspreader“. That’s also ironic, since the Times was a superspreader of Russia Collusion misinformation:

The NY Times was a superspreader of Trump-Russia collusion misinformation, and social media giants did nothing to stop it. https://t.co/EUFjLE7emO

And I remember when Frenkel, prior to her NY Times days, tried to spread the misinformation that Hamas was not really responsible for the kidnapping of three Israeli teens just before the 2014 Gaza war, even after Hamas claimed responsibility!

The Washington Post mocked the fact that many of the people who established large Parler followings continue to use their Twitter accounts. Well, duh, moving to Parler for many people and websites is a chance to establish an additional channel to reach people, not necessarily the exclusive channel for doing so. It’s also an insurance policy against being banned or locked at Twitter.

On Twitter, the loons spread a claim that Parler was hacked, and Twitter obediently made the hashtag trend. Liberals were ecstatic that Parler had been hacked and that private Direct Messages of conservatives would be published — but it was all fake. There was no hack.

What is going on?

Parler is over the target, and catching flak.

It is not yet, and may never be, the news influencer that Twitter is. Twitter is more the public square, which is why its blatant censorship is so politically damaging. Parler is more a place where conservatives can have an uncensored voice and reach other conservatives.

That’s certainly the case for Legal Insurrection. In just a few months on Parler, our following is 265,000, and growing daily. By contrast, after a decade on Twitter, we can’t break the 40k barrier — maybe if we screamed “traitor” and “Trump is worse than Hitler!” more often, Twitter would show our tweets to more people. As of now, we tweet into the darkness, and I don’t think that’s a coincidence.

Our engagement — the number of people who interact with our posts on Parler, is through the roof. It now is a major driver of traffic, unlike Twitter which is almost non-existent, and Facebook which has been good in the past but now must have us on some sort of throttle. Our “reach” at Facebook is down significantly, without any reported violations. That may be a result of Facebook deciding to favor large platforms like the NY Times.

We’re still on Twitter and Facebook, but those are our past. Parler, and MeWe, and other emerging platforms are our future. A future in which we just can’t risk being held hostage to internet thugs and autocrats; we need an escape plan, and we’re not waiting to be banned to implement the plan.

Conservatives having an option is what Politico, The Atlantic, The NY Times, NBC News, and Twitter loons cannot stand.

The Politico story lays out the case why Twitter and Facebook should lose any section 230 protections
“faced fact-checks, condemnation and restrictions when trying to spread inconclusive evidence”
You can’t have it both ways.

On another front, My Space faded away, the same could happen to the others, even with all the money behind them.

What do you mean “you can’t have it both ways”? What two ways can’t you have it? § 230 was never intended to require political neutrality. This forum we are using right now could not exist without § 230’s protections; if &sect 230 were repealed Prof J would have to close it down. And yet it does not even pretend to be politically neutral, and nor should it.

Conspiracy theories have always been a dime a dozen on the internet. Most get ignored by the powers that be.

When they start getting bothered about a particular “conspiracy theory”, its probably because it hits too close to home

Abysmal interface, must give mobile number for DM function, serious liability problems with terms of usage. We can do better than this. Shame that so many are going to Parlor, when Gab is better.

Parlor’s ToS are too overreaching. Why does Parlor need my cell number?

Of all the times a gun could backfire, if only it did during the taking of that photo at the top.

“Obsessed with trying to marginalize Parler, to be more precise.”

FOX News, Sinclair, AON, NewsMax, etc. – and now Parler. Totalitarians have always sought to control free flow information. They aggressively demonize enemies and repress truth to maintain control. We used to watch it from afar in brutal dictatorships across the world. Now, it’s within our gates. Dorsey, Zuckerberg, et al are simply high tech versions of this totalitarianism – with blessings from impotent Congress that refuses to remove section 230 government protections from these high tech totalitarians.