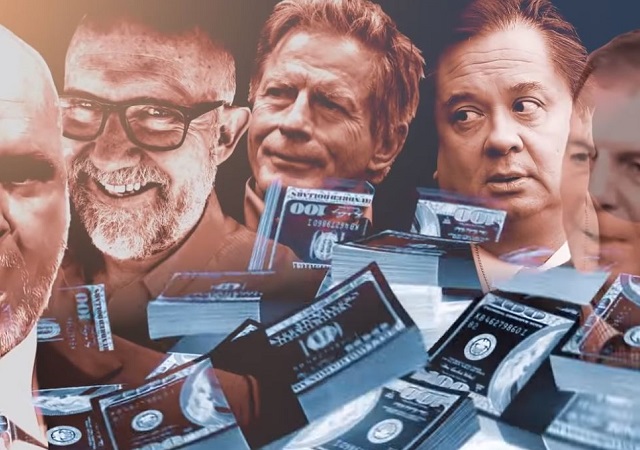 This isn’t about President Donald Trump or fighting to uphold a “fair and free” election. This is all about control and shutting down opponents.

Grifters have to grift.

I guess The Lincoln Project (LP) realized the grift was over after the media announced Joe Biden won the 2020 election.

Trump is their cash cow. Without him who would they go after for the dough?

The LP turned its eyes to Jones Day, the law firm filing election lawsuits on behalf of Trump.

Because if you cannot get to Trump then you go after everyone around him. 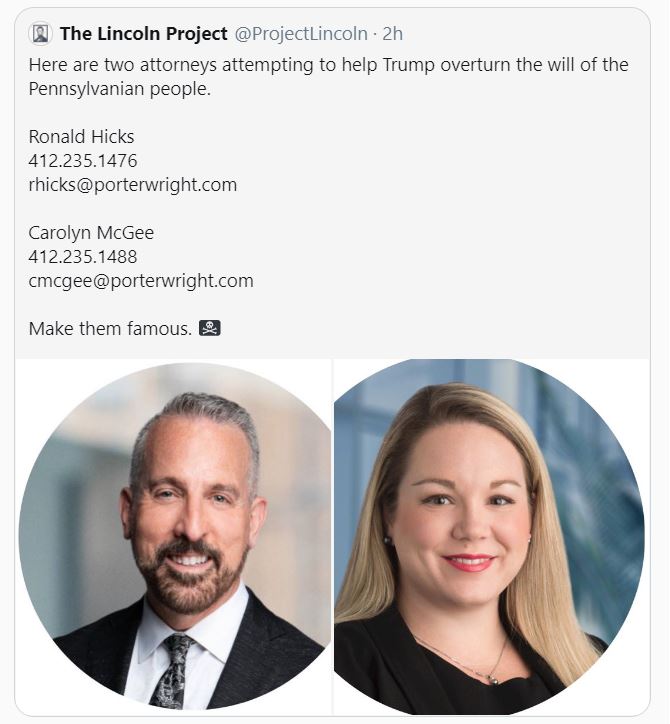 In following tweets, LP encouraged its followers to stalk Jones Day, its lawyers, and clients. 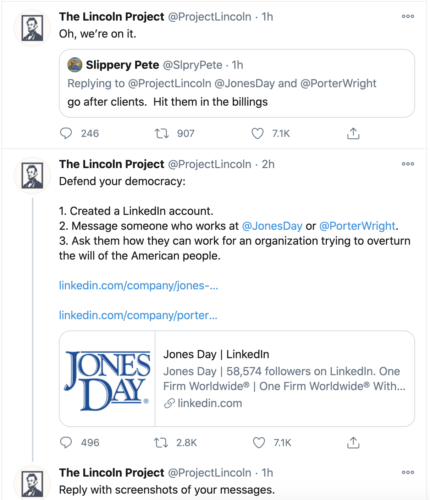 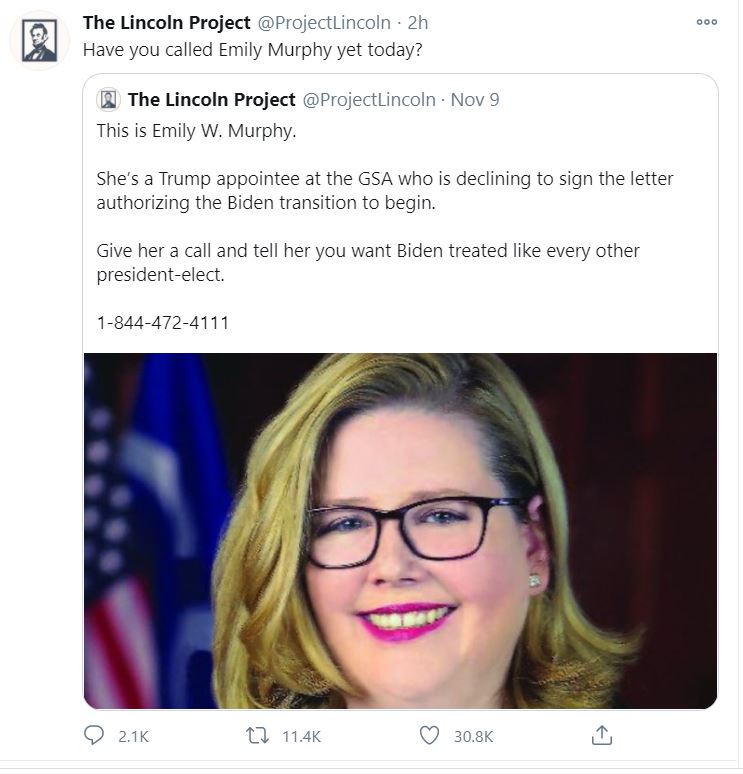 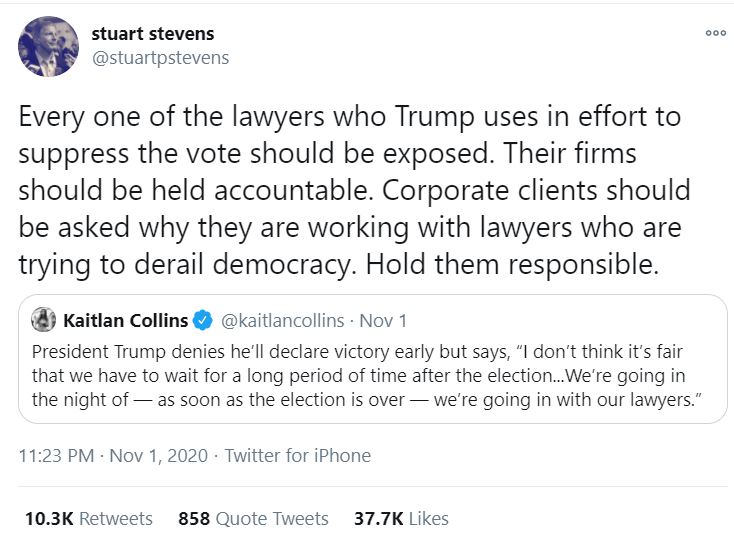 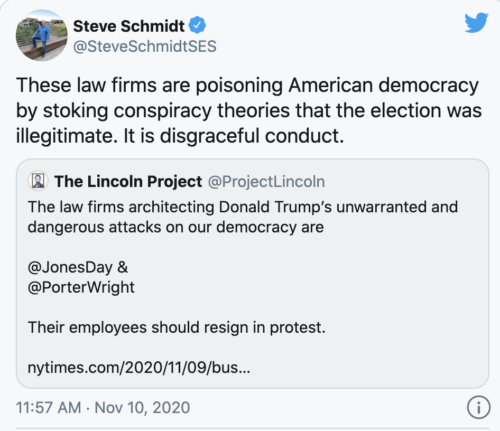 This is illegal. A lawyer told me that those in the legal profession call targeting clients “Tortious Interference with a Business Relationship.”

I asked the lawyer if the clients could sue:

IF someone induces a breach of a business relationship, such as lawyer and client, without a proper legal basis (and there are only a very few, elections aren't one) they can be liable for the financial loss and punitive damages.

It is. Jones Day is a huge firm. They aren't going to be intimidated I promise you. They hunger for this kind of case.They're making bank on it regardless the outcome.

The only reason to dox someone is to make their life miserable and unable to work, which would make most people succumb and admit defeat.

It gets more disgusting.

Greg Sargent wrote up a glowing review of LP’s latest campaign, giving the power-hungry group of supposed conservatives a platform to spew their stuff.

Sargent had to note that “Jones Day represents The Washington Post on labor and employment law matters.”

Rick Wilson promised this attack on the lawyers was just the beginning. I guess this won’t be the last time we see LP trying to conserve conservatism!

Wilson wants to know “how General Motors justifies working with a company that’s aggressively seeking to undermine the validity of a free and fair democratic election.”

Did Wilson ask WaPo that same question since as I noted above the publication uses Jones Day?

NEW:@ProjectLincoln is launching a TV and social media campaign targeting @JonesDay for any role it plays in enabling Trump's efforts to overturn the election, I'm told.

“I’d like to know how General Motors justifies working with a company that’s aggressively seeking to undermine the validity of a free and fair election," @TheRickWilson tells me.https://t.co/ugh4Rhqr5u pic.twitter.com/Dnx2nFvxo7

This seems to be yet another example of authoritarian tendencies to change and modify language.

Biden isn’t ‘President-elect’. Neither candidate will be the next President until the EC vote. We could agree that 8 December safe harbor date and certification date could be used as the date to declare a particular candidate is.the winner.

I noticed that the networks now use the word ‘call’. They used to say ‘projected’. That is a late difference in the perception that people/viewers get.

‘We project that candidate x will be the winner of y state’.

‘We can now call the the state of x for candidate y.’

The former implies uncertainty while the latter implies finality. The deliberate choice of language contributes to a narrative.

So back to the topic. These Lincoln project grifters are figuring out that no one trusts traitors. They need a way to become relevant, this appears to be the best they could come up with.

I hope that they get plenty of brush back from Jones Day and every other firm and person they are targeting. My advice is stop.

Even if successful the result is attorneys who are PO because you got them fired. Now they have time on their hands to devote to making your life Hell via pro bono work.

And the firm’s response? “Hey! We’re not representing Trump!”

ANTIFA in suits who lost their shekels as ‘Republican political consultants’ not because of their abject failures but because of Trump’s successes.

Here’s for you Georgie Porgie:

So the White House physician isn’t an M.D. Good Lord. Someone sneeze on me now and just get it over with. https://t.co/owiJn0Iv1t pic.twitter.com/647BUJ25H4

More to come, but if Ricky believes the South will arise again – he fits into the Grand Kleagle Democrat history; if Georgie Porgie thinks D.O.’s aren’t Doctors, how much would you pay him to represent your legal interests?

Let me apologize if any of you are attorneys but as a retired federal agent, I have found 90% of attorneys, both prosecutors, and defense to be worse than the person on trial.
I will call it now, no matter who wins the election the Lincoln logs get rolled up on profiting off their nonprofit and oh wait let’s through in wire fraud, we feds love that charge.

I did grad school then law school. Never took the bar exam. I would agree that many attorneys are ethically deficient. Now are they legally deficient? Some are for sure.

Personally, my own anecdotal observation leads me to say that the likelihood of ethical and legal deficiency increases with the level of perceived importance. This is not by any means exclusive to attorneys. The same is true for the military, academia, LEO, gov’t, non profits and corporate environment.

The higher one rises in an organization the more the tendency to start believing in one’s own infallibility.

Those who have destroyed their own careers are now trying to destroy the careers of others. Its makes a sick sort of sense. Perhaps we should return the favor and dox those who contribute to the Lincoln Project not just the pieces of Schiff who run it? What about its vendors? This could be fun.