“Since many of the openly antisemitic people I saw were of immigrants like myself, I felt compelled to do something.” 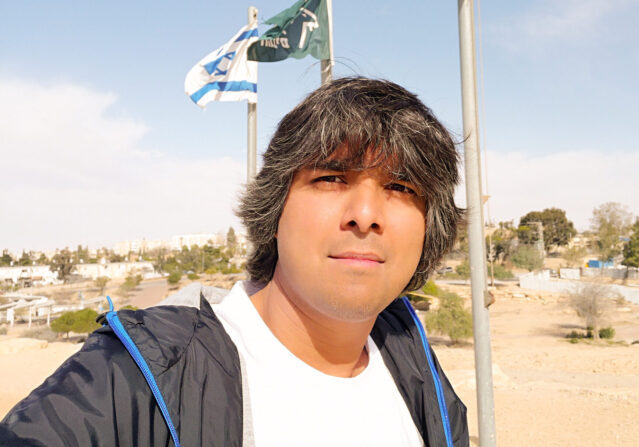 Over the weekend, Jewish News Syndicate (JNS) unveiled its list of the Top 40 Global Advocates for Israel Online and it included a name familiar to Legal Insurrection readers: LI author Vijeta Uniyal.

How did an Indian man, a resident of Germany (though currently in South Africa for work-related reasons), with little to no exposure to Jews and Israel become one of the internet’s foremost advocates for Israel?

Honored to be profiled as "JNS top 40 global advocates for Israel" https://t.co/zg9w1KhtfX pic.twitter.com/sTDIKrPOSo

Vijeta graciously answered several questions to explain what prompted him to become an online champion of Israel.

After graduating with a degree in German studies at university in New Delhi, Vijeta spent a decade working for German governmental organizations. These organizations were located both in India and abroad and included the German embassy, the German foreign trade agency, Goethe Institut, and Humboldt Foundation.

Vijeta’s study of German history and literature acquainted him with the Holocaust, and, more generally, the European persecution of Jews.

“I moved to Germany in 2012 and witnessed unbridled Antisemitism for the first time in my life on the streets of Cologne city in wake of the Gaza conflict of 2012,” Vijeta recalled. “Since many of the openly antisemitic people I saw were of immigrants like myself, I felt compelled to do something. I started a blog and took to social media. The support and encouragement I got from my community led to the creation of the social media initiative ‘Indians For Israel.'”

Despite taking this courageous stand, Vijeta wrote, “I did not know any people of Jewish faith or Israelis before I began organizing for Indians4Israel at the grassroots.” He had studied parts of the Hebrew Bible, which, “enhanced my affinity toward the Jewish faith and civilization.”

Israeli magazine @MakorRishon profiles me among defenders of Israel

As a Hindu and a diaspora Indian, there is no honor greater than to be counted among friends of Israel.#indiawithisrael @indians4israel pic.twitter.com/ZdedSIJQ5o

Given Vijeta’s unique perspective – an Indian living in Europe – I also asked his perspective on other issues related to Israel.

I asked Vijeta about the shift in Indian policy toward Israel since the election of Narendra Modi as prime minister in 2014. For decades, India, as part of the so-called “non-aligned movement” was hostile toward Israel.

Vijeta’s response surprised me. He wrote that “right from the establishment of the Jewish State in 1948, government policy and public opinion, especially of the country’s Hindu majority, have been at odds with each other.” He explained further that Hindus “view Israel through the prism of their own history.” He elaborated on this point, explaining, “The rebuilding of a Jewish State in its historic land, revival of ancient language Hebrew, and restoration of an old civilization are seen by many as an inspiration for reviving the Hindu civilization after centuries of displacement and foreign rule.”

The election of Modi hasn’t changed everything in India.

“However, there is still a major battle here,” Vijeta observed, “Our academic institutions are infested with anti-Americanism. It has shaped the mind of our media, bureaucratic and political elite. This is reflected in our media coverage, academic debate, and even our policies at the UN and other international fora.”

With jihadis on killing spree across Europe, Germany's state-run @dwnews playing apologist for Islamists and running their vile propaganda. https://t.co/UU3CCaWEe4

Finally, I asked Vijeta, currently a resident of Germany, about Europe’s antipathy toward Israel, especially at a time when other regions are showing greater acceptance of Israel.

He wrote that the near-silence of European political and journalistic elites toward the Abraham Accords “says everything you need to know.” Vijeta is unsparing in his criticism of this attitude, calling it “the latest mutation of the old European antisemitism.” He added, “Masquerading it behind the new lingo of social justice dilutes none of its old toxicity, bloodlust or spiritual depravity.”

Congratulations to our colleague Vijeta Uniyal on this well-deserved honor and many thanks to him for his incisive observations.