Historical Statues Vandalized and Toppled in Multiple States on Thanksgiving

Historical Statues Vandalized and Toppled in Multiple States on Thanksgiving

“The statues and buildings vandalized on Wednesday and Thursday appear to have been targeted in protest of colonialism, gentrification and capitalism.” 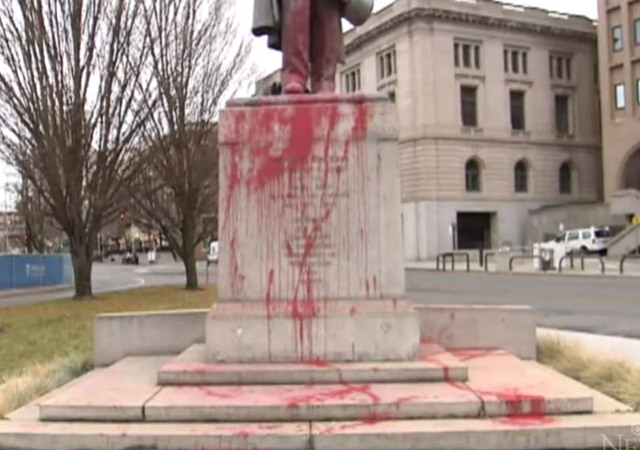 While millions of Americans were celebrating Thanksgiving this week, against the wishes of numerous Democrat leaders, other people were destroying historical monuments in multiple cities.

Who would do such a thing? Do you think it was angry Trump supporters?

Statues Across Country Torn Down on Thanksgiving

A Spokane, Washington, police report says that a statue of President Abraham Lincoln was vandalized with paint, while multiple colonial statues were toppled or defaced in Minneapolis, Minnesota.

Some of the graffiti written on the statues include “no more genocide” and “all colonizers are b——-.”

A group called the Pan-Indigenous People’s Liberation network has claimed responsibility in a statement that also calls for a “national decolonial day of action.”

Protesting America’s past? Statues of former presidents, other historical monuments vandalized in 4 states over Thanksgiving

Historical monuments and statues have been graffitied or toppled in four cities since Wednesday — seemingly in protest of America’s past.

The statues and buildings vandalized on Wednesday and Thursday appear to have been targeted in protest of colonialism, gentrification and capitalism.

The words “land back” were spray-painted on statues and buildings in multiple cities. The LANDBACK campaign is an Indigenous movement against white supremacy and for Indigenous food sovereignty, housing, and clean air and water.

In Chicago, vandals tried but failed to topple a park statue of President William McKinley early Wednesday using a rope tethered to a car, police said.

McKinley was president from 1897 to 1901 and his push for westward expansion is now widely criticized as racist, for pushing Indigenous people off their land, WBBM-TV reported.

Here are some photos:

Colonizer statues had a rough night in Minneapolis. Not my photos. pic.twitter.com/gZgZANrDdW

Chicago police are investigating after an attempt to pull down a McKinley Park statue. The monument in the Brighton Park neighborhood was also spray-painted, police said.​ https://t.co/lBA7kRQJWy

We already know how Trump feels about this sort of thing. Do you think anyone in our media will ask Biden to condemn it? Somehow, I doubt it.

They didn’t have anywhere to go for Thanksgiving dinner. They alienated their family members.