Biden intends to strengthen Iran when he is in office. Iran supported his campaign. Collusion anyone? 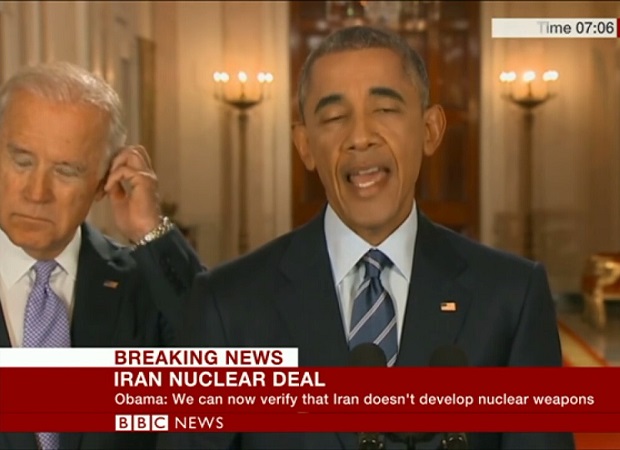 A former aide to Joe Biden said that the former vice president considers rejoining the nuclear deal with Iran to be a priority within his administration’s first few months.

Amos Hochstein, who served in the Obama administration, told Israel’s Channel 12 news that returning to the deal was “high on [Biden’s] agenda.”

“I believe that in the first months [of Biden’s presidency], we’ll either see him rejoin the deal fully, or what I would call ‘JCPOA-minus,’ meaning lifting sanctions in exchange for suspending some of the Iranian nuclear programs [developed] in the past three years,” Hochstein told the news program.

🔴This is very dangerous! The ghost of the disastrous “Obama Legacy” is looming over the Middle East as a Biden Administration might be on its way to the White House. We will have to wait and see…but returning to the Iran Nuclear deal would be a disaster. #Iran pic.twitter.com/2d3Eiad1YJ

Given that Biden was the vice president during the Obama administration when the nuclear deal was completed, this is hardly surprising. It’s also exactly what Iran wants.

On Sunday, AP reported that Iran’s President Hassan Rouhani called on Biden to return to the nuclear deal.

“Now, an opportunity has come up for the next U.S. administration to compensate for past mistakes and return to the path of complying with international agreements through respect of international norms,” the state-run IRNA news agency quoted him as saying.

(I’m sure that when Biden obliges Rouhani, we’ll see a burst of articles criticizing him for coddling dictators.)

My suggestions to @JoeBiden from before the elections:
Your Iran Plan Needs To Focus More On Human Rights.
Islamic Republic has sanctioned us, the Iranians, for 41 years from our basic rights. We need moral leadership from the U.S. president to help us https://t.co/l7elGg0FXF

The JTA uncritically explained Biden’s thinking behind his proposed rapprochement with Iran:

Biden has faulted Trump for exiting the Iran nuclear deal. Trump said the deal, which exchanged sanctions relief for a rollback of Iran’s nuclear capability, was too generous and not strict enough. Israel’s Netanyahu government was in agreement with Trump; Benjamin Netanyahu lobbied intensely against the deal, which was brokered by President Barack Obama, and which Biden helped sell to Congress.

Trump’s withdrawal angered European partners to the deal and has pushed Iran’s economy to the brink of collapse — but it has done nothing to stem Iran’s nuclear development. In fact, since the U.S. pullout, Iran has accelerated its nuclear development, blaming the United States for violating the deal.

Biden wants back in, in part because he wants to repair ties with Europe, and also because he believes the deal is the best means of keeping Iran from obtaining a nuclear weapon. He has said he wants to make it stricter, extending the “sunset clauses,” which allow Iran to wind down some of the restrictions. Not so clear is whether Biden would want restrictions on Iran’s missile program and its regional adventurism rolled into a renewed deal.

It is well and good that the JTA mentioned at the end that it isn’t clear “whether Biden would want restrictions on Iran’s missile program and its regional adventurism rolled into a renewed deal.” However, it is clear that Iran would accept no such restrictions. So if Biden is serious about reengaging with Iran, he will not insist on these new demands. Presumably, Biden would also roll back the Trump administration’s extension of the arms embargo. This would allow Iran to buy advanced weapons systems from Russian and China without fear of American sanctions. (Iran regularly violated the arms embargo over the first five years of the nuclear deal, shipping weapons to Hezbollah and Houthis in Yemen. And yes, the UN confirmed this.)

Even if the JTA is correct that the US withdrawal from the deal led to an acceleration of Iran’s nuclear weapons program, contrary to the Obama administration’s claims, the deal was never limited to Iran’s nuclear program. It was a paradigm shift to give Iran more freedom to act in the Middle East. This was the thesis of critics such as Tony Badran and Michael Doran. Even deal supporter, Thomas Friedman, recognized this, writing in 2015:

But, given the disarray in Yemen, Iraq and Syria, do we really care if Iran tries to play policeman there and is embroiled in endless struggles with Sunni militias? For 10 years, it was America that was overstretched across Iraq and Afghanistan. Now it will be Iran’s turn.

During the Obama administration, things got much worse in Yemen, Iraq, and Syria thanks to the green light the deal gave them. One of the Trump administration’s accomplishments has been to counter Iran’s influence. In part through American force (e.g., the killing of Soleimani) and rallying its allies (Israel and the Gulf States) to counter Iran’s aggression. Also, renewed sanctions have forced Iran to choose between domestic spending and foreign adventures. Iran hasn’t given up the foreign adventures, so the regime is dealing with an increasingly restive population even as it attempts to spread its influence abroad.

If elections were held tomorrow among the millions of displaced Syrians, I think Trump would have won. Many Syrian give him credit for assassinating Soleimani, whose militias drove them from their homes and killed their loved-ones.
(I support Biden)

Not only did the nuclear deal fail to constrain Iran’s nuclear program and serve as a green light to increase its regional aggression. It was passed by a White House that sought to discredit its opponents and had no problem suggesting that those opposed to the deal had dual loyalty. Even Tablet, a centrist Jewish online magazine, noted that the administration and its allies engaged in the “kind of naked appeal to bigotry and prejudice that would be familiar in the politics of the pre-Civil Rights Era South.”

So when many in the MSM are hailing a return to civility, Biden is expressing an interest to return to a failed deal that was launched in a climate of vilification and hate.

Clip circulating in Iran on WhatsApp; an interview with Zarif from several years ago.

Reporter asks him to confirm if he’s friends with any US officials, he responds that when he was ambo at UN, he was allowed extensive meetings with senators, one of whom was Joe #Biden pic.twitter.com/c1NNxshmhq

Aside from the particulars of Biden’s anticipated return to the nuclear deal, there are real concerns about the man who will be leading this effort. As a senator, Biden was one US official who was known for his talks with Iranian FM Javad Zarif.

Here’s how Biden described the phony smiling face of the world’s leading state sponsor of terror:

“Zarif is a tough advocate, but he’s also pragmatic, not dogmatic,” Biden told me then. “He can play an important role in helping to resolve our significant differences with Iran peacefully.”

Over the weekend, Zarif demonstrated how pragmatic he is. Celebrating the apparent Biden win, Zarif tweeted:

A sincere message to our neighbors:

Betting on outsiders to provide security is never a good gamble

Only together can we build a better future for all.

That’s pragmatic, in the sense that the statement, “nice peace deal you’ve got there, it would be a shame if anything would happen to it,” is pragmatic. It is a veiled threat against the UAE and Bahrain for making peace deals with Israel. Despite the smile, Zarif is truly the thuggish face of the regime.

Misled by a phony charm, Joe Biden thinks that he can do business with Zarif and the regime he represents. How many thousands of people will suffer?

Hunter Biden IS his father’s son, a less than sober chip off the block of ignorance.

I have no doubt Iran would happily suspend programs that are already near their end of life.