As the enormous pro-Trump, pro-America crowd dispersed, antifa and BLM targeted families, young couples, women, and other patriots who were isolated from the crowd 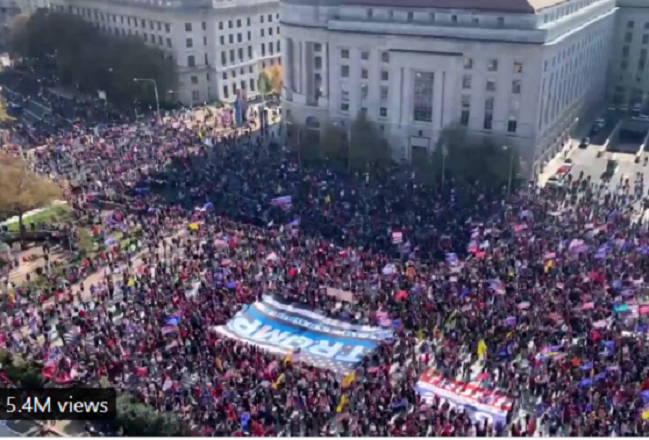 On Saturday, supporters of President Trump gathered in Washington DC to protest an election that certainly looks suspect and to support the candidate they believe lawfully won.

While we don’t yet have an official attendance tally for the #MillionMAGAMarch, it is abundantly clear that thousands, perhaps tens—or even hundreds—of thousands, rallied to support Trump and his efforts to have every legal vote counted.

President Trump, as he did outside Walter Reed, thanked his supporters with a motorcade visit.

Needless to say, the leftist activist media is downplaying the numbers, making false claims and insinuations about MAGA violence, and downplaying the impressive rally at every turn.  And of course, antifa and BLM were on hand to assault Trump supporters as they were leaving the event. Like a roving pack of animal predators, they attacked those they found isolated from the MAGA crowd.

The crowds of Trump supporters gathered quickly, and it wasn’t long before the massive nature of the event was felt among them.  Indeed, jokes were reportedly flying about how the media would downplay the numbers.

As crowd realizes how massive rally is jokes start flying about how media will claim that there are a few thousand people here. pic.twitter.com/Bt95Qv2mLJ

Right on cue, Politico “reported” that ‘hundreds’ were in attendance (via Twitchy); the article title even says “thousands.”

A week after the presidential race was called for Joe Biden, hundreds of Trump loyalists converged on the nation’s capital to protest the election results and falsely assert the vote was stolen https://t.co/oLawPageQy

It sure looks like far more than ‘hundreds’ to me, but you be the judge.

AMAZING! Can hear you all from the West Wing Colonnade. A beautiful day in Washington, D.C. THANK YOU, PATRIOTS!! #MAGA🇺🇸🦅 pic.twitter.com/RJJ8bvYlfr

Apparently, the activist media was “reporting” from blocks away from the actual rally in their ongoing effort to gaslight the American people.

.@FoxNews and the Fake News Networks aren’t showing these massive gatherings. Instead they have their reporters standing in almost empty streets. We now have SUPPRESSION BY THE PRESS. MAGA! https://t.co/RMOa4jKZwA

President Trump had signaled Friday that he might make a surprise visit to the rally on Saturday.

Heartwarming to see all of the tremendous support out there, especially the organic Rallies that are springing up all over the Country, including a big one on Saturday in D.C. I may even try to stop by and say hello. This Election was Rigged, from Dominion all the way up & down!

And sure enough he did:

While the MAGA rally was taking place, MAGA patriots vastly outnumbered the antifa/BLM horde, who cowered behind a line of police for fear the actually peaceful MAGA gathering would become violent and they would be harmed.

Large group of antifa black bloc have amassed to confront participants of the #MillionMAGAMarch. Antifa are outnumbered and being protected by a line of police. Video by @livesmattershow: pic.twitter.com/7d3n2s7iDm

DC: Antifa is now being protected by MPD officers in riot gear

Antifa is completely out numbered today here in DC pic.twitter.com/cpbQXWB1GF

The irony of faux anarchists and radical socialists who want the police abolished/defunded sniveling behind these very police officers is rich (via Twitchy).

Antifa wanna defund police but then need them for safety against Trump supporters that aren't even trying to attack anyone 😂😂🥱 @realDonaldTrump https://t.co/RZ8L2S6W4G

When someone tells you who they are, believe them.

Which side is violent? https://t.co/rKGRhr3Sw9

As the enormous pro-Trump, pro-America crowd dispersed, antifa and BLM targeted families, young couples, women, and other patriots who were isolated from the crowd.

Trump supporters are being denied from BLM Plaza and harassed by black bloc members. This woman had her hat taken, her flag repeatedly ripped away (eventually it was stolen) and later her hair was pulled as people in the crowd followed them away from the plaza pic.twitter.com/tq3SNdBB2v

a #Trump supporter is chased out of the plaza after being hit by multiple water bottles. I also noticed multiple journalists/photographers cursing at him #MillionMAGAMarch pic.twitter.com/xKi8qmTmdZ

After stealing a flag from a Trump supporter, antifa break the stick and sharpen it to make a spear. #MillionMAGAMarch.

A family with children are in tears as they are followed and harassed by antifa. #MillionMAGAMarch pic.twitter.com/Kb8f2sJ1e5

Young couple in DC followed by crowd of BLM-antifa thugs who hit them and throw liquid on them. #MillionMAGAMarch pic.twitter.com/Lqo4evvviK

BLM-antifa assault older man trying to leave the area after the #MillionMAGAMarch. pic.twitter.com/S26myo9bgk

BLM rioter rushes in and punches a woman in the back of the head as she’s walking away. #MillionMAGAMarch pic.twitter.com/1lrfD4MLxW

BLM-antifa rioters hurl projectiles and an explosive at people having dinner after the #MillionMAGAMarch in DC. pic.twitter.com/syDM7YQFrS

DC Police rush to protect the entrance of a hotel near BLM Plaza. Lots of shoving by police. pic.twitter.com/KMoZOWjQOm

Unable to rush the lobby of The Capital Hilton hotel in DC, a mob of BLM-antifa are standing in the street and shining lights and lasers into the building’s windows. Video by @livesmattershow: pic.twitter.com/CmCvk8tCXk

Yes, these antifa/BLM cowards are ‘fearless’ when they’ve identified a vulnerable person or family to victimize en masse, but they were happy to huddle behind riot police for protection when they were outnumbered.

The event itself was a huge success.

Thank You All! What A Great #MarchForTrump! #MAGA 🇺🇸 https://t.co/xx7rD2nXCP

Reports are circulating that DC police are, in one form or another, standing down and that various pro-Trump groups, including the Proud Boys are attempting to restore order in DC and to stop antifa/BLM thugs from assaulting Trump supporters.

As the MAGA crowds dispersed, the antifa/BLM mobs preyed upon the vulnerable who were separated from their fellow Trump supporters.  If the DC police were not willing to protect the defenseless, it’s no wonder that Trump supporters welcomed whatever protection they got.

President Trump is outraged by the events.

ANTIFA SCUM ran for the hills today when they tried attacking the people at the Trump Rally, because those people aggressively fought back. Antifa waited until tonight, when 99% were gone, to attack innocent #MAGA People. DC Police, get going — do your job and don’t hold back!!!

As is their MO, the antifa/BLM cowards sucker punch or hide behind police from grown men but are happy to attack women, children, and the elderly.

The side that is always referred to as “peaceful” is almost never peaceful pic.twitter.com/dTodoHjh8H

Time to abandon the cities to their fate and fortify the suburbs. There’s a war coming.