From Huntington Beach to Fresno, Californians are tired of the senseless and ineffective lockdowns. 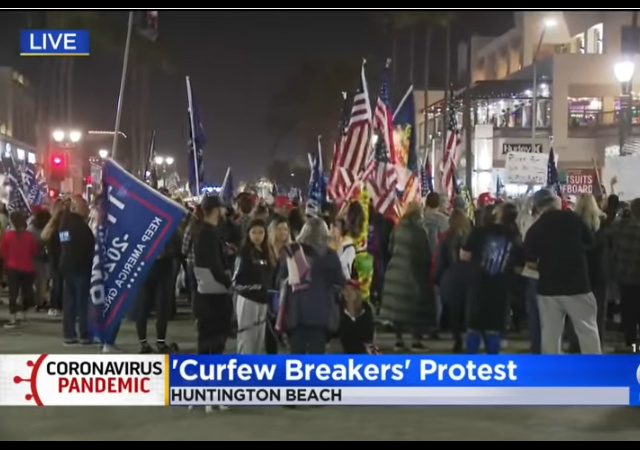 In a sign of the times, protest signs are beginning to blossom across the country as Americans demonstrate against senseless and useless coronavirus restrictions.

In California, the new wave of lockdowns for most of the state’s residents will last until it’s nearly Christmas.

On Saturday, the state began a partial overnight curfew in attempt to slow down the spread of the virus.

The new restriction requires 41 counties across the state to close all nonessential businesses from 10 p.m. until 5 a.m.

That is set to last through Dec. 21. But many residents aren’t happy with the new rules.

Images showed demonstrators — many with American flags or Trump 2020 flags — reveling in what seemed like a New Year’s Eve-style celebration. Passing vehicles could be heard honking in support.

In one video, a recording of singer Lee Greenwood’s patriotic song, “God Bless the USA,” could be heard playing.

This what we need more of!

Protesters are tiring of the seemingly arbitrary rules and that curfews are just one step too far.

“I’d like to see curfews go away,” one person who attended the protest told CBS Los Angeles.

“I think there are too many restrictions, as is. Obviously, a lot of people don’t agree with what our governor and city officials are doing, but I’d prefer to see something done a little bit different but curfews are just a little too far.”

Many Californians recognize that the “experts” have no effective solutions to controlling the airborne virus from spreading.

“I think we’ve tried lots of tools throughout the past nine months and none have really worked, if you will,” the demonstrator told the outlet.

“This one is certainly less restrictive than the other ones, which leads me to believe that it’s probably not going to do much.”

There was a crowd in San Clemente protesting the curfew.

Protesters also took to the street in Fresno to protest the curfew.

The crowd came together at the River Park Shopping Center with signs, music and chants showing their disapproval of the statewide curfew.

Demonstrators say the governor’s orders won’t make a difference in keeping people safe — and the curfew will only hurt businesses that depend on nightlife.

“Look at the businesses across the state,” a woman said. “It’s very hard for small businesses, especially in this state. I just think it’s ridiculous — they’re going about this all the wrong way.”

In part, what makes their protests possible are sheriffs who will not enforce Gov. Gavin Newsom’s curfew.

“Look at what happened at Huntington Beach,” explained former law enforcement public relations worker Neil Washington to the Globe. “All those people were out, but all the police did was watch.

Pasadena tells Not A Doctor Barbara Ferrer to stuff it.

The push back is gaining steam. Pasadena probably has more high-end restaurants per-capita than Paris. It’s a big deal around here.

Taking a stand to this stupidity is the only way to make it end. It’s good the sheriffs are focusing on protecting people from the bad guys instead of wasting public resources for another ineffective curfew. Of course, Newslolini would get to have his dinner party or two if he wishes.