Crowds Gathering in Front of White House Ahead of Polls Closing

Crowds Gathering in Front of White House Ahead of Polls Closing

It will get worse. 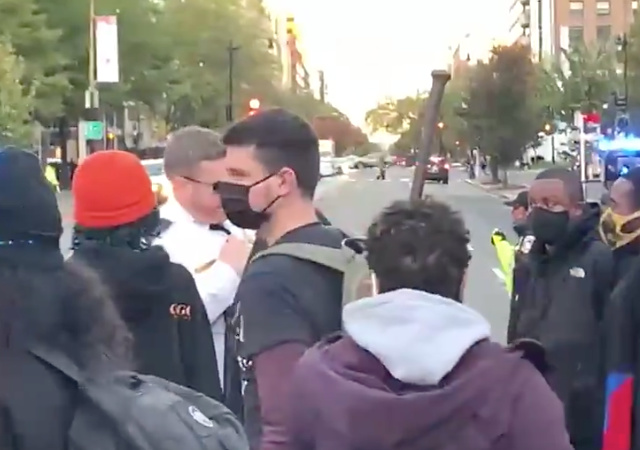 This is why so many businesses boarded up windows in Washington, D.C., and other cities across the country.

ShutdownDC warned that it would organize protests at the Black Lives Matter Plaza by the White House.

One person had a metal baseball bat. The police arrested another person.

WHITE HOUSE: at least one arrest has already occurred via reports from @realJamesKlug
pic.twitter.com/RghCruIBUa

WHITE HOUSE: a metal baseball bat is seen inside the backpack of a protester

This is why businesses have to board up their windows w/ wood pic.twitter.com/B4rjqMx3mf

Demonstrators are beginning to gather outside of the White House in Black Lives Matter Plaza pic.twitter.com/MMuk3ivKqx

A proud President Donald Trump supporter did not allow those around him to bring him down.

He was asked why he was not wearing a mask to which he said he has a strong immune system— then he cranked out 50 push-ups. pic.twitter.com/eUKxXjurdV

Facing the White House. The MAGA man is outnumbered by hundreds, but people are more stunned than upset. pic.twitter.com/XcAbEGrIbU

Let’s see….. Trump will cause, causes and caused the riots. Oh, and the Jews caused the Holocaust. got it.

Night of the Long Knives… Part I.

The left love to blame others for their negative and violent emotions.

I have contended for a long time that Hillary is an expert on deplorables, her flock.