Dr. Robert Epstein has been warning about this for a while. 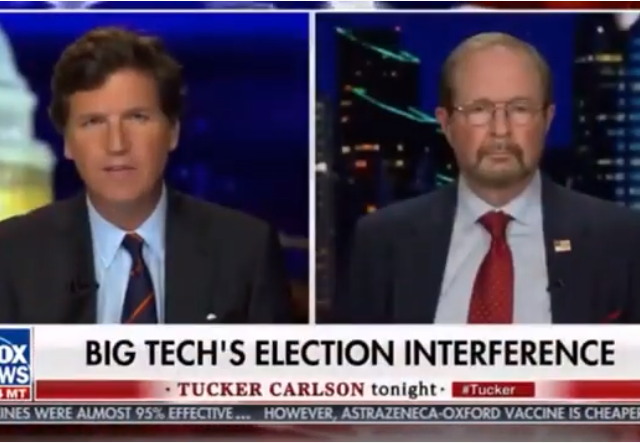 He suggested that they acted on behalf of just one party, the Democrats.

As an example, just look at Twitter’s suspension of the New York Post over their reports on Hunter Biden just before the election.

To expand on this point, Tucker brought on Dr. Robert Epstein, a Democrat who has been following the influence of big tech on American politics.

Last year, Epstein predicted on Tucker’s show that big tech companies like Google could shift up to 15 million votes.

Watch the whole segment below:

No honest person can say that the 2020 election was fair.

It was RIGGED – and we caught them! pic.twitter.com/cLHJ8o7UeS

In June of 2019, Robert Epstein testified before the Senate Judiciary Committee about Google’s power and influence. Here’s an excerpt of his testimony:

I am Dr. Robert Epstein, the proud father of five children, a resident of California, and Senior Research Psychologist at the American Institute for Behavioral Research and Technology. I love America and democracy, and I am also not a conservative. I have been center/center-left my whole adult life. You’ll see in moment why this fact is relevant to my testimony.

I am here today for three reasons: to explain why Google presents a serious threat to democracy and human autonomy, to explain how passive monitoring systems can protect us both now and in the future from companies like Google, and to tell you how Congress can immediately end Google’s worldwide monopoly on search. My plan for ending that monopoly was published just yesterday (Monday, July 15, 2019) by Bloomberg Businessweek (Epstein, 2019d). I am attaching a copy of my article to my testimony and respectfully request that it be entered into the Congressional Record.

This is a concrete example Epstein offered to illustrate one of the ways Google uses its influence:

In the weeks leading up to the 2018 election, bias in Google’s search results may have shifted upwards of 78.2 million votes to the candidates of one political party (spread across hundreds of local and regional races). This number is based on data captured by my 2018 monitoring system, which preserved more than 47,000 election-related searches on Google, Bing, and Yahoo, along with the nearly 400,000 web pages to which the search results linked. Strong political bias toward one party was evident, once again, in Google searches (Epstein & Williams, 2019).

This will continue to be a problem until something is actually done about it. Hauling Mark Zuckerberg and Jack Dorsey before Congress for public scoldings is not cutting it.

In other news, researcher finds water to be wet.

Wake me when someone, you know, *does something* about it.

Not to belittle the work Dr. Epstein has done as he is well worth listening to, but no duh.

Big tech’s reponse:
“Oh yeah? Whaddaya gonna do about it, you helpless punk?!” Followed by another shove into the mud.

They censored POTUS again right after the hearing, feeling not the least bit censured. The incoming principal (G-D help us!) favors these jocks.