AOC’s Death Stare at Sen. Manchin Shows the Divide in the Democratic Party

AOC’s Death Stare at Sen. Manchin Shows the Divide in the Democratic Party 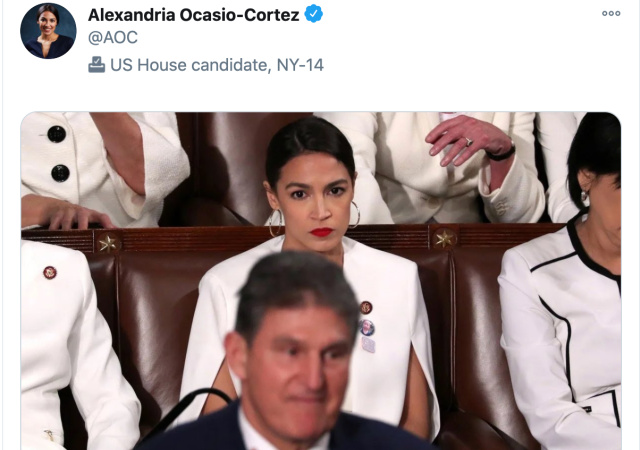 Rep. Alexandria Ocasio-Cortez (D-NY) thought posting a picture of herself throwing a death stare at Sen. Joe Manchin (D-WV) in response to him condemning socialism and defunding the police was a smart idea.

Instead, it shows how AOC is full of herself and there’s still a divide in the Democratic Party.

I also find it hilarious that she talks down to President Donald Trump over his personality and yet she can act like a child.

Someone also needs to remind AOC that just because you’re loud doesn’t mean you’re right and everyone agrees with you.

God forbid someone criticizes you, AOC. How many times have you done that to your fellow Democrats?

AOC has got to get out of her head and box. She is so focused on herself that she just cannot imagine how others think and feel.

Did AOC ever consider West Virginia? Manchin is a Democratic senator in a deep red state. He is in the Senate to represent the people of his state, not AOC’s over-the-top socialist agenda.

But everyone who screamed Medicare-for-All won re-election! According to AOC, that must mean every single American wants socialism, right?

Fuzzy pointed out last week that all of those people come from a safe Democratic district. Like AOC!

AOC insisted that the party needs to remember that she is not the enemy and neither is the base. The base? Excuse me?

The Democrats lost House seats as Republicans made a huge gain. Democrats have a slim majority. The Republicans will likely keep control of the Senate.

Speaker of the House Nancy Pelosi and other Democrats usually brush aside AOC and her gang. I wonder if more will speak out against them if the Republicans keep the Senate.

AOC has already tried to pressure Joe Biden into picking far-left people for his Cabinet and embrace radical ideas. Far-left publications have snapped fingers and said it’s time for the Democrats to that position as well.

It’s not a good idea.

These people all have young and enthusiastic voters. Have you noticed that they’re always young? It reminds me of Matthew McConaughy’s character in Dazed and Confused: “I get older, they stay the same age.”

Okay, obviously not the same situation! But the fact is there is a reason why AOC and Sen. Bernie Sanders always have young fans. So many people are socialist or leftist at a young age (me) and then change their ways when they get into the real world (me).

Don’t take my word for it. There are plenty of AOC fans and Democrats who have had enough of her antics.

Know your audience: It’s time to change the phrasing on this as to not alienate moderates. Reallocate funds to support services is much more of a winning argue.

Girl..are you mad you are losing at your own game cause I would be mad too pic.twitter.com/1DaNcTu6pC

I love you, but PLEASE🙏🏽listen. We're working our asses off in Georgia. I was with Jon Ossoff in Albany, Ga this morning. ALL OF US believe #BlackLivesMatter & holding law enforcement accountable, incl. redirecting funds if necessary, but "Defund the police" hurts DEM candidates. pic.twitter.com/sYUE937Pvn

AOC, girl, I have so much respect for you but you are really starting to piss me off. Change is gradual. It takes compromise. Please stop hurting the party. It doesn't always have to be a purity test. You're hurting our chances. Stop, please!

AOC -I love you girl but you have to get behind the party and knock it off. You can’t shove your ideals down the parties throat assuming your way is the right way. It’s about compromise. That’s how you get things done. Your do more damage then good to the party sometimes.

Addressing many of the comments above: AOC projects an image of stupidity, certainly. But, behind that ditzy exterior is a conniving, controlling woman with set goals. If she wins a third term, she is there for a long as she wants to be. She is the future Speaker.

As for Ilhan Omar: she is nothing but the Democrat party with the mask off. She is also highly dangerous because no one in Minnesota has the steel to oppose her, or take her down, by whatever means necessary.

“By any means necessary” is a phrase employed by our enemies. For us, it should be what we do; not a slogan on a picket sign.