Harris tried to laugh and giggle her way through the debate. She had some canned one-liners, but showed that her knowledge still is a mile wide, and an inch deep. 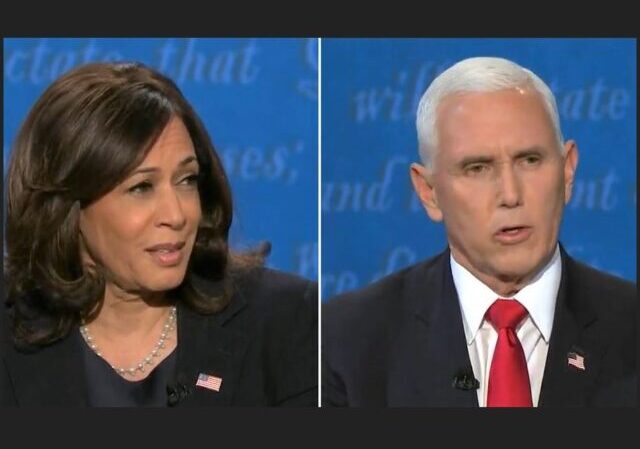 On September 12, 2019, after an abysmal debate performance by Kamala Harris, I wrote, Kamala Harris’ campaign should have ended tonight at #DemDebate: She proved beyond a reasonable doubt that there’s no there, there.

But my big takeaway is that someone’s campaign should have ended tonight. Kamala Harris. Her performance tonight was an embarrassment of canned one- and two-liners bashing Trump, and anecdotal stories about people she’s met.

Her opening statement ended by telling Trump to go back to watching Fox News.

On the issue of trade policy, she compared Trump to the Wizard of Oz. The joke failed, with George Stephanopoulos reacting awkwardly.

When Biden noted (correctly) that the constitution would prevent Harris from many of the sweeping executive orders she’s promising, particularly on guns, Harris didn’t disagree, she simply said she’ll do it anyway …

Kamala Harris’ campaign should have been over tonight. But I’m not making predictions.

Harris’ campaign to win the presidential nomination was over, and ended with a massive flop before voting started. Harris was rewarded for her failure with a nomination to be Vice President. But there’s still no there, there, her intellect still is a mile wide and an inch deep, and she proved it again tonight.

Harris gave a giggly response to the important issue of a vaccine:

Sen. Kamala Harris on vaccine: "If Donald Trump tells us that we should take it, I'm not taking it." #VPDebate pic.twitter.com/4WLvBW7Omq

Pence absolutely crushed the follow up, and Harris never responded:

Pence also pointed out Harris’ own radical record. She had no response.

Vice President @Mike_Pence: Kamala Harris is one of only ten members of the Senate to vote against the USMCA, putting her radical environmental agenda ahead of American jobs#VPDebate pic.twitter.com/2tStPaptmj

Harris spent much of the debate smirking and laughing:

HERE's the moment when Vice President Pence absolutely broke Kamala Harris on the economy. Note how she wouldn't argue on the substance and instead about how he interjected. #VPDebate pic.twitter.com/g7NVoZsFsJ

Harris also refused to answer the question about court packing:

"Once again, you gave a nonanswer…American people deserve a straight answer. If you haven't figured it out yet, the straight answer is yes, they're going to pack the Supreme Court." – @Mike_Pence hits @KamalaHarris on not directly answering court packing question. pic.twitter.com/FwTmxXBBwv

Harris repeated numerous lies about the “both sides” Charlottesville and calling coronavirus a “hoax, but was ineffective in making arguments.

A laugh and a giggle is not an argument. There’s still no there, there.

BTW, Harris’ little Lincoln story was not accurate. He did not hold off naming a Supreme Court Chief Justice in 1864 to replace the deceased Taney because “he wanted the people to vote first.” There is ZERO evidence he ever said anything like that. The fact was that the Senate was not in session and would not return until December, so there was no point in naming somebody (Chase) until after the November election. Which is what Lincoln did.

“The fact was that the Senate was not in session and would not return until December, so there was no point in naming somebody (Chase) until after the November election. ”

As someone else said – “Black Liars Matter”

and Lincoln knew he would be reelected. He had just won the Civil War, and the South would not be permitted to vote.

Well, I guess I’m in the minority thinking Kamala’s performance was amazing.

Coming off as more unlikable than Hillary is no mean feat!

And yet 4 years later we see the Democrats can do better. She really excels in all areas which Hillary was rated on in 2016 except for the one drawing on her ethnic race; That has to be handed off to the American Indian who wanted to be President.

Compare Hillary’s cool performance when grilled for hours over her response in Benghazi, with Harris’ totally out of bounds behavior in attack Brett Kavanaugh with no evidence — she even set perjury traps for him which he deftly avoided. Harris is a real piece of work.

“On the issue of trade policy, she compared Trump to the Wizard of Oz.”

Which is pretty funny to those of us fond of the conceit that Wizard was a crypto commentary on the “free silver” economic campaign… what with the yellow bricks, the green spectacles, the silver slippers (changed to ruby only in the movie), etc.

I listened to, but did not watch, the VP debate, so I did not see any facial expressions. I thought Harris did very well because Pence had no real answers to counter her charge that the Trump Admin totally failed in its coronavirus response. Since that is the only issue in this election for the ultimate deciders in battleground states – suburban swing voters and elderly shut-ins, none of the discussion about court packing, etc… matters in the slightest.

The facial expressions were totally unprofessional. It’s not a race thing. I’ve seen plenty of black people who can have heated arguments without getting angry face.

What would be a suitable answer for the Coronavirus response — proof that a different strategy would have saved more lives? We can’t rerun the experiment and certainly don’t want to. So that’s a criticism that can be made of any executive in charge of such a response. Most people understand that.

And any effort to say that the demonstrations / riots in NYC would spread the virus were called “racism” by the NY state health director!