Trump’s right. Lesley Stahl discredited herself in this interview. 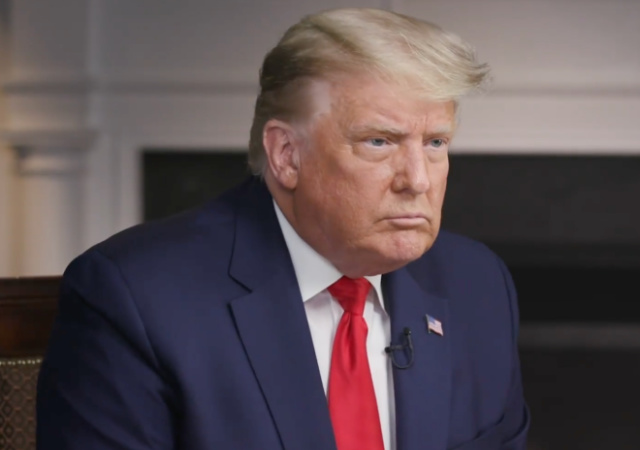 President Donald Trump released a 38-minute video of his interview with 60 Minutes journalist Lesley Stahl in order to prove it was nothing more than a “vicious attempted ‘takeout’ interview of” him.

I know a few journalists like to play devil’s advocate, like John Stoessel, but Stahl comes off as a condescending know-it-all snob. Stossel does it well and we know he’s not doing it to take shots at the subject.

I will soon be giving a first in television history full, unedited preview of the vicious attempted “takeout” interview of me by Lesley Stahl of @60Minutes. Watch her constant interruptions & anger. Compare my full, flowing and “magnificently brilliant” answers to their “Q’s”. https://t.co/L3szccGamP

“I wish you would interview Joe Biden like you interview me,” Trump said, complaining that while his November opponent undergoes a massive scandal implicating corrupt ties to Chinese businessmen, the news media asks former Vice President Joe Biden what kind of ice cream was purchased during a campaign stop.

“He’s in the midst of a scandal,” Trump continued, before being cut off by Stahl.

“You’re like Big Tech. You’re protecting him,” Trump said, going on to outline several of the questionable transactions recently revealed by Senate investigators and the New York Post in recent weeks to a defiant Stahl. “Do you think it’s okay for the mayor of Moscow’s wife to give him millions and millions of dollars? … Do you think it’s OK for Hunter Biden to say we’re giving the ”Big Guy’ 10 percent of this massive amount of money?”

The FBI confirmed it’s been investigating the laptop since 2019. Tony Bubolinski, one of Hunter’s associates, confirmed that the emails published by The New York Post are genuine.

Then Stahl really tried to tie Trump to the kidnapping plot against Michigan Gov. Gretchen Whitmer:

“Of course not,” Trump shot back. Stahl insisted, however, that Trump had said so at a recent rally.

“Lesley, it’s such a vicious thing that you just said. I never said lock up the governor of Michigan. I would never say that. Why would I say that? Because she’s doing lockdowns?” he said.

I guess Stahl forgot that the men behind the plot also hate Trump. Here’s the thing about anarchists. Real anarchists, not the ones out on the streets, despise authority no matter the party.

Trump brought up the Obama spying on his campaign. Stahl said that CBS cannot air anything that is unverified:

“The biggest scandal,” Trump said however, “was when they spied on my campaign.”

“There’s no real evidence of that,” Stahl responded, telling the president that the network would not be airing anything it “can’t verify.”

“You won’t put it on because it’s bad for Biden,” Trump said.

CBS’s response lacks the self-awareness you would expect from the establishment. 90% of it is bragging about the supposed importance of 60 minutes while the other 10% tried to defend Stahl.

So glad to have someone in the White House who will stand up to the Mockingbird Media.

Leslie Stahl must be living on another planet. To maintain that the Trump campaign was not spied on is beyond belief. What do you call unmasking? And to maintain that the Hunter Biden laptop is unverified is also beyond belief. There are thousands of pictures of Hunter Biden in compromising positions, and there are others who have come forward to verify the emails.
> BTW compare how the Maoist State Media ran with the unverified Russia collusion hoax, but how they avert their eyes when confronted with Hunter Biden’s laptop. Not for nothing do I say that the media are in the propaganda business not the news business.

She has exercised willful ignorance; there’s no coming back from that.

‘Willful’ nothing. She’s a liar and a propagandists for the worst scum on the planet.

Leslie Stahl has been around the block a few times–lots of mileage on her. By now she should know that some things can not be fixed. And stupid is one of them. But in her world she may actually believe what she says.

This is gold (“That’s gold Jerry, gold!”) . . . and I have shared with one of my friend/acquaintances — one of the leading Trump impersonators who will doubtlessly enjoy and learn from.

He tries to stay apolitical (because, well obviously), but he’s pretty good too: https://www.youtube.com/channel/UCzQpFuWIqe0VkezvAOeki0Q