“Dr. Sean Dooley says Pres. Trump ‘is in exceptionally good spirits’ and told doctors he felt like he ‘could walk out of here today’ 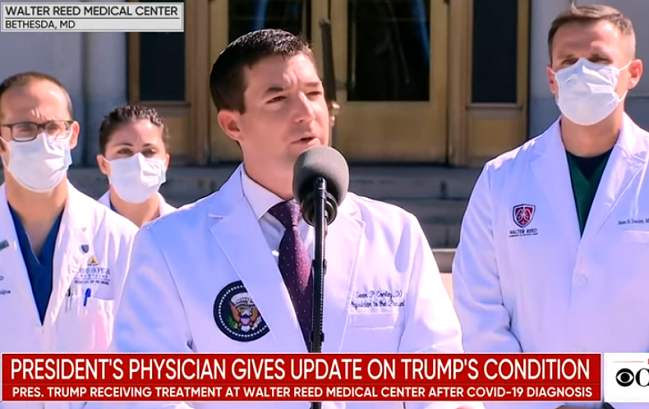 President Trump was diagnosed with COVID-19 approximately 72 hours ago, and on Friday, he was moved to Walter Reed in “an abundance of caution,” reports said.

Saturday morning, Trump’s medical team held a presser in which they assured the nation that the president is doing well and the team is “extremely happy” with his progress.

Dr. Sean Conley, the White House physician, does note that days seven through ten will be most critical in determining the likely course of the president’s illness.

As of now, however, the president is in good spirits, walking around, asking the right questions, and very involved in his care and recovery.

Here are some highlights (you can watch the full presser below):

Doctor Sean Conley says he is “extremely happy" with the progress the President @realDonaldTrump has made since being diagnosed with coronavirus pic.twitter.com/1qFJ5y7JC2

Doctor Sean Dooley says President @realDonaldTrump "is in exceptionally good spirits" and this morning he said 'I feel like I could walk out of here today' which is very encouraging! pic.twitter.com/U6XDrvW4yE

NEW: Dr. Sean Dooley says Pres. Trump "is in exceptionally good spirits" and told doctors he felt like he "could walk out of here today."

"The president this morning is not on oxygen, not having difficulty breathing or walking around." https://t.co/ogz76xW1yc pic.twitter.com/GsEYC2lXRk

Dr. Garibaldi: "Our plan is complete a five-day treatment course for Remdesivir."

"The big plan for today…is to encourage him to eat, to drink, to stay hydrated, to be up out of bed and to be working and doing the things he needs to do to get well." https://t.co/ogz76xW1yc pic.twitter.com/A36fOkkCDZ

Gee, it’s not an instant death sentence?
Who knew!
I could have sworn 200 million people had died from this by now.

“I could have sworn 200 million people had died from this by now.”

That was last week. By now the death toll has reached 200 billion.

At this rate I may start to worry.’

Not going to believe any word on President Trump until Sunday in a week. Praying for his health and let the good Lord do what needs to be done.

New at 11, Joe and the Ho schedules Bus Tour to be called “Gaslight Express”.