“When you tell somebody that they’re too Catholic to be on the bench, when you tell them they’ll be a Catholic judge, not an American judge, that’s bigotry.” 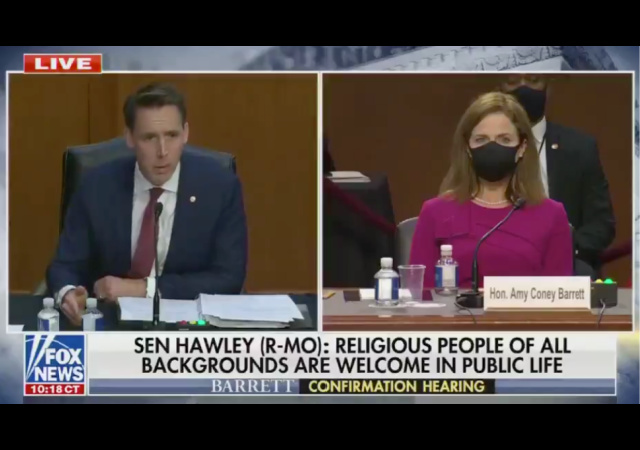 As a Catholic, I appreciate him speaking out against this bigotry.

We have seen and heard so many lies about Barrett, people misconstruing Catholicism as a way to attack Barrett.

Even Joe Biden has said that no one should question Barrett about her faith, but instead on Obamacare: “No, her faith should not be considered. I don’t think there’s any question about her faith.”

I find it funny that they attack Barrett’s Catholicism and yet their nominee is Catholic.

HAWLEY: "When you tell somebody that they're too catholic to be on the bench, when you tell them they'll be a catholic judge, not an American judge, that's bigotry. The pattern and practice of bigotry from members of that from this committee must stop." pic.twitter.com/92FPVrvR14

Hawley said it’s “an attempt to bring back the days of the religious test.”

“We all know that she and her husband have chosen to raise their family according to their Catholic beliefs and faithful fellowship with other Catholics,” he said. “We all know that 65 million Americans are Catholics, and many many millions more are Christians of other persuasions. Are they to be told that they cannot serve in public office, that they are not welcome in the public sphere unless the members of this committee sign off on their religious beliefs? I for one do not want to live in such an America, and the Constitution of the United States flatly prohibits it.”

Glad he’s my Senator even if I’m not Catholic and don’t have much to do with religion.

Agreed. Not my senator and not much into religion but it is refreshing to see someone stand up for a CONSTITUTIONAL human right.

Democrats are so corrupt that they want to take away rights granted by the Constitution and replace them with fake rights like the right to reparations, Obamaphones, free tampons, and the internet. It’s a classic bait and switch. Take away real freedoms and give the mob of voting sheeple free stuff to keep them sated and distracted.

Rights that are granted by God, and protected from government interference by the Constitution.

Because the Democrats implicitly believe that the official unofficial religion of America is Progressivism.

Well, that, plus, the ideology of “Submission” — the only quasi-religious ideology that the Dhimmi-crats approve of. The Dhimmi-crats really love totalitarianism, in all its myriad forms.

I remember when they told us the Kennedy White House would get its marching orders straight from the Vatican.

How can the Dems/Progs be opposed to a devout Catholic, when Slow Joe Biden identifies himself as a Devout Catholic?

Because Joe Biden is a “political devout Catholic”, that is someone who was raised Catholic but converted to The Church of Progressivism ™. He touts out the Catholic label when politically useful.

Like Pelosi he calls himself Catholic without necessarily believing or following doctrine. Ie – on abortion. There’s a bunch of stuff you CAN disagree with current teaching on while remaining a member, but treating the unborn as disposable spare organs is not one of them.

Mike Lee (R-Utah) was also excellent on religion, if more broadly based. Hawley was good, he went right after Feinstein as did Lindsey Graham in his opening remarks when he called out the “ranking member” for her outright dishonesty in withholding Blasey-Ford’s allegations against Kavanaugh for twenty days until just before his hearing. It was refreshing to see Republicans put Democrats on notice publicly, up front, that their conduct then hasn’t been forgotten. They should keep it up all the way through this proceeding.