The police arrested many people, including a protester “for spraying pepper spray at a family of seven that was inside a vehicle that was part of the caravan.” 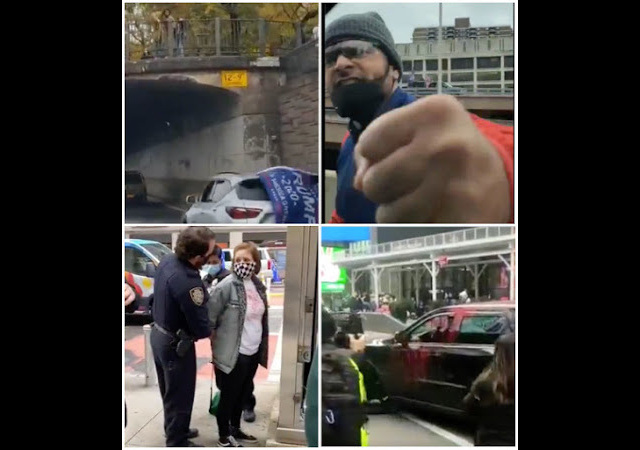 The police arrested so many people, including a protester “for spraying pepper spray at a family of seven that was inside a vehicle that was part of the caravan.”

A member of the family told Fox News that the unprovoked attack happened while the family was driving down 5th Ave with the car windows down and Trump flags displayed.

The man, who wished to remain anonymous fearing his family could be targeted, said a car pulled up next to them and unleashed pepper spray into their vehicle.

“Immediately the kids started crying and screaming and I jumped out of the car after I was peppered [sic] sprayed as well,” the man said.

The man said the culprit chased him down 5th Ave trying to pepper spray him again. His mother flagged down an officer and the suspect was arrested.

The man told Fox News that the kids “are now left traumatized” and still “coughing from” the residue.

The haters then went after Giuliani:

Video posted on Twitter shows a flag-draped pro-Trump caravan — identified online as a Jews for Trump demonstration — led by Giuliani being bombarded with eggs, including one spot at 59th Street and 5th Avenue — with one protester yelling “f—-g scum” at the former Big Apple mayor.

“F–k you Rudy,” another man is heard screaming.

Ruddy Giuliani just rode through NYC with Trump Caravan. Trump cars got egged and flags ripped up by BLM.

Other videos show one person throwing eggs at the cars.

He told the caravan he has “a bunch of these, babu,” and that he “can do this all f*cking day.” He called them “sh*theads” and told them to “[L]earn your f*cking place.”

Woman arrested for spraying pepper spray at the #JewsForTrump vehicle convoy on 5 Avenue in Manhattan. pic.twitter.com/kfrwaLTJgT

This man is so upset that a #JewsForTrump vehicle convoy practically shut down the Brooklyn Bridge while heading to Manhattan, that he began punching vehicles. @NYPDnews @realDonaldTrump @TrumpWarRoom pic.twitter.com/6kSZKUoa0F

The people who believe the Fine People Hoax must be very confused by this. https://t.co/OP36Kumiq4

Why were there not many more arrests? We saw many instances of vandalism, and the police did nothing. What if there were similar attacks against BLM demonstrations, would there also be little or no reaction

Unfortunately, that’s probably the next step.

Jews for Trump? Pickup trucks, a sea of flags not one of which is Israeli, and convoyers kicking leftist butts?

Yes. These are Brooklyn Jews, not Manhattan Jews.

“Other videos show one person throwing eggs at the cars.

He told the caravan he has ‘a bunch of these, babu,’ and that he ‘can do this all f*cking day.’ He called them ‘sh*theads’ and told them to ‘[L]earn your f*cking ‘place.’”

I wonder, when are AzadM_52* and Chelsea Handler going to announce their engagement? Her former favorite boyfriend 50 Cent doesn’t know his $#@%ing place either, so she had to whitesplain to him about his proper place on the leftist plantation after reminding him he’s black.

*There are 52 AzadMs on Twitter? I’m willing to bet money the M in AzadM’s Twitter handle is what has been the most popular name in Britain for years; Muhammad. It isn’t this year but only because the people who keep track of these things are a)idiots and b)journalists (obviously I repeat myself.) The propagandists claim that including all the variant English spellings of Muhammad (Muhammad, Mohammed, Mohammad, Muhammed, Mohamed, Mohamad, Muhamad, Muhamed, Mohamud, Mohummad, Mohummed, Mouhamed, Mohammod, Mouhamad, etc.) would somehow distort the list. When in fact there is only one way to spell Muhammad: مُحَمَدْ (although various forms of Arabic calligraphy look different).

The Quran commands Muslims to put uppity non-Muslims in their “&@#$ing place.” Of course, Muslim men are supposed to put uppity-women in their place:

Surah 4:34 “Men are in charge of women by [right of] what Allah has given one over the other and what they spend [for maintenance] from their wealth. So righteous women are devoutly obedient, guarding in [the husband’s] absence what Allah would have them guard. But those [wives] from whom you fear arrogance – [first] advise them; [then if they persist], forsake them in bed; and [finally], strike them. But if they obey you [once more], seek no means against them. Indeed, Allah is ever Exalted and Grand.”

Excuse me: men, who are in charge of women because Allah has made men superior to women, are supposed to put women in their place if they just suspect the woman might get uppity. Like those “coloreds” and “Jooooooz.” So men aren’t supposed to wait until women actually get uppity, and are commanded to beat them to remind them of their place just in case they might forget it.

So when Chelsea “I had to remind him that he was a black person, so he can’t vote for Donald Trump” Handler discovers AzadM_52 is her new favorite BFF and they make it official, she’ll be wearing a Burqa.

And who said that Islam never had a positive effect on civilization?

As a retired federal agent I can form a good working hypothesis that the people who attacked the Jewish Trump supporters can probably be charged with a hate crime.
The rise of anti-semitism from the left is concerning.

I’m philosophically opposed to hate crimes legislation. I’ve never heard of a “love crime.” A lot of people are killed not because somebody hate the victim for the color of their skin or whatever marked the protected group that placed the victim in the special caste in our caste system of justice.

Some teenager is at the mall and he’s wearing an Oakland Raiders jacket. Some gang banger sees him, silver & black are his gang’s colors, so the gang banger executes the kid and takes the jackets. Or some kid is wearing red or blue athletic shoes. So a Blood or a Crip kills the kid for his sneakers.