“We continue to… offer an open invitation for Cal Cunningham to sit down with us for a one on one interview, an invitation so far he continues to decline,” one North Carolina reporter noted, pointing to an empty chair. 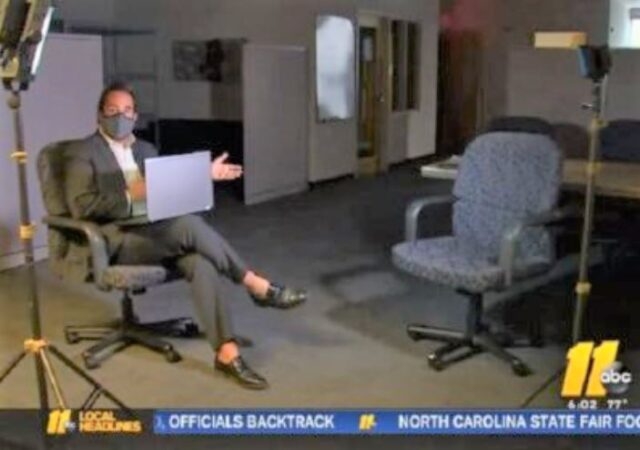 With a little over a week to go before election day, embattled North Carolina Democratic Senate nominee Cal Cunningham continues to face heat from the local media for refusing to sit down for formal interviews.

Since news broke on October 1st of Cunningham’s confirmed affair with married California consultant Arlene Guzman Todd, Cunningham has sat down with reporters only once. And as we previously reported, that press conference – done a week later – was a disaster.

The Army veteran and married father of two spent 30 minutes during the presser talking with constituents about his Republican opponent Sen. Thom Tillis’ alleged “failures” on the Wuhan Coronavirus relief bill. When it came time to take questions, he only gave reporters 10 minutes and didn’t answer a single question directly. Instead, he gave canned responses about how he had “apologized” for the hurt he caused and alleged that North Carolinians weren’t interested in his personal matters.

That event set the stage for the media’s continued reporting since on unsuccessful attempts to get him to go on camera to discuss not only the one, possibly two affairs he’s alleged to have had but also his differences with Tillis on issues like the COVID relief bill, packing the court, and so on.

Here’s a supercut that shows reporters from several North Carolina-based news stations like WCNC, CBS-17, WRAL, and FOX-46 Charlotte all filing reports on how they have continued to ask the campaign for interviews with no success. One outlet even said they were “ignored” by the campaign:

Here’s Charlotte-based WSOC-TV reporter Joe Bruno talking Friday about how the campaign has repeatedly dodged formal interview requests and has even stopped sending out event schedules to reporters, all in an obvious bid to avoid more questions:

"We and other media outlets have been putting in requests for interviews with the candidate for multiple weeks now and those requests have been denied or ignored. The campaign has also stopped sending out event schedules." #ncsen #ncpol pic.twitter.com/AnZqcoAv4A

And in what is undoubtedly another embarrassing moment for the campaign, both the Charlotte Observer and the Raleigh News and Observer pulled their planned endorsement of Cunningham in a rare move for both papers:

More embarrassing still was this recent report from WTVD where reporter Jonah Kaplan sat down next to an empty chair and gestured to it while talking about how they had reached out many times to the campaign but were denied.

“We continue to reach out to the Cunningham campaign and offer an open invitation for Cal Cunningham to sit down with us for a one on one interview, an invitation so far he continues to decline,” Kaplan noted:

That empty chair segment is yet another moment from this Senate race that is eerily similar to the 2014 Senate race between Tillis and then-Sen. Kay Hagan (D), where Hagan was noticeably absent for a Spectrum News debate with Tillis:

As is the case at a national level, the political press here in NC are hostile to Republicans while giving Democrats free passes more often than not. But one thing I’ve noticed about the local press is that, unlike national news outlets, when Democrats make end-runs around the media, news networks here – even the Raleigh-based outlets that are especially notorious for giving Dems the kid-glove treatment – turn hostile towards them fast, which is what we’re seeing here now.

My gut feeling is that these reports are one of several things having a negative impact on Cunningham’s campaign down the homestretch. People are turning on their TVs after dinner and are seeing local reporters from their hometowns talking night after night about how Cunningham is dodging interview requests. It’s not a good look for Cunningham at all.

As of this writing, poll numbers in this race are tightening up even more, with the last two polls showing a tie and most previous October polls taken before that showing the race within the MOE, with Cunningham only having a very slight lead. This is in stark contrast to September, which showed Cunningham leading in most polls comfortably between 5 and 10 points:

Cal Cunningham's polling average lead in the #NCSEN race against Sen. Tillis is down to just 1.7 as of this writing w/ only a little over a wk to go before election day. Stark contrast with how Cunningham was ahead between 5-10 points in most Sept. polls. #ncpol #Elections2020 pic.twitter.com/Gy5TK3aKKg

So as it stands now, Cunningham is not only persona non grata within elite Democratic circles, but he’s also managed to tick off the normally Democrat-friendly North Carolina political press corps.

In addition to that, polling indicates voters are inching away from him and towards Tillis at the 11th hour of both campaigns.

There’s some irony here in how Cunningham’s avoidance of the media has had the opposite effect he’d hoped for by actually keeping the one issue he wants to go away very much in the spotlight with 9 days to go before election day.

The 2014 race between Tillis and Hagan went down to the wire in an election-night nail biter thanks in part to some negative press Hagan received in the closing weeks of the campaign. It looks like the 2020 race is headed in that same direction.

Put a pair of socks on, Jerk.

He’s gone Joe on North Carolina!! When you lose the radical left media, you know you’re in trouble!!

He’s trying to trick us into thinking he has a few brain cells. Then he’s sitting all by himself with a mask on, forgot his socks, and didn’t eve think to lay out a politically correct social distancing circle.

How inspired was Clint Eastwood!