Is that George Bush 1 or 2? Or did he mean George Washington? 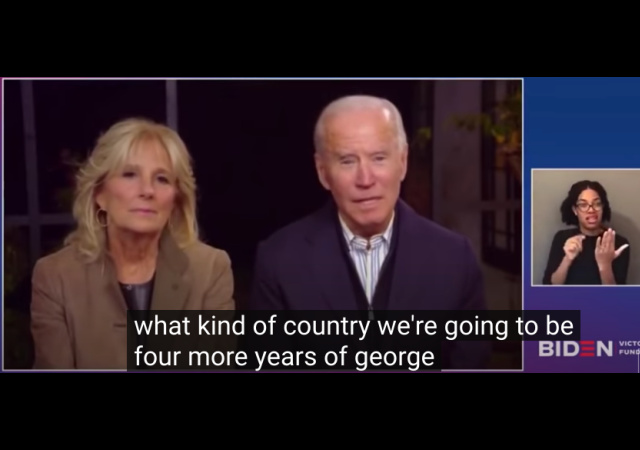 Biden confused President Donald Trump with either George Bush, George W. Bush, or maybe even George Washington at the “I Will Vote” concert:

“The character of the country, in my view, is literally on the ballot,” Biden told moderators George Lopez and CNN analyst Ana Navarro.

“Four more years of George, um, George, gonna find ourselves in a position where if Trump gets elected, we’re gonna be in a different world.”

His wife Jill appeared to mutter “Trump” under her breath to him.

Of course, Trump mocked Biden about it on Twitter.

Joe Biden called me George yesterday. Couldn’t remember my name. Got some help from the anchor to get him through the interview. The Fake News Cartel is working overtime to cover it up!

I guess Biden jumped on the free education for everyone because he told 60 Minutes he could send every person qualified for a four-year college for $150 billion:

During an interview that aired Sunday on CBS’ “60 Minutes,” Biden bragged about the number as a feature of proposed “significant institutional changes” that would include a 15% minimum tax on corporations, saying it would raise more than $400 billion.

“I can send every single qualified person to a four-year college in their state for $150 billion,” Biden said. “I can make sure every single person who qualifies for community college can go and we still have a lotta money left over. That’s what I mean by significant institutional changes.

“60 Minutes” noted that organizations like the Tax Policy Center have questioned the validity of Biden’s claims that the corporate tax would raise that much money. His quoted cost of education was also off the mark, according to his campaign.

Biden’s campaign had to correct him after the interview:

“After our interview, Mr. Biden’s staff told us he misspoke, and that the cost of free public college could be twice as much as he said,” CBS’ Norah O’Donnell said in a voice-over after Biden’s claim aired.

Sen. Bernie Sanders (I-VT) introduced the College for All Act of 2017, which has the costs. Forbes detailed it (emphasis mine):

It reveals that the cost of a “free” college education to the federal government would be $47 billion a year. Accepting this figure, it would add $470 billion to Mr. Biden’s education plan over the next ten years, bringing the total cost to $1.22 trillion. So why doesn’t Mr. Biden publicly embrace this cost?

Give the cost of his other proposals, $1.22 trillion seems almost modest. He’s announced other policy initiatives that dwarf the cost of his education plan. According to the Washington Post, Mr. Biden’s total agenda would cost more than $4.1 trillion over the next ten years, and this figure predates his new college proposal. His climate plan alone would cost $2 trillion.

Given the enormous borrowing and spending that Mr. Biden has promised, one wonders why he won’t reveal the cost of his education plan or how he’ll pay for it. One reason may be that he doesn’t have faith in Sen. Sanders’ estimate of the cost. Some have estimated the true cost of Mr. Biden’s total education plan at $2.92 trillion. Under this analysis, just the cost of “free” tuition alone would total $1.19 trillion, more than twice Sen. Sanders’ estimate.

lol the media is spinning that Biden was, get this? Talking to George Lopez

His wife didn’t think he was referring to George Lopez–she kept saying Trump under her breath.

But the REAL “Big Guys” put the word out so…

The gal who was signing for him, signed “George”.

He was talking to George Lopez. And that’s probably why, when he blanked on Trump’s name, the first name that came to mind was that of the person he was speaking to.

The idea that he was referring to one of the Bushes was always a wild guess. People who spread it as if it were a fact deserve to be mocked. But the fact is that he did refer to Trump as George.

Maybe he the confused old plagiarist thought he was running against George Washington. Maybe he confused the senate with some prior term in the colonial Congress, and he was advocating in favor of the revolution of King George III.

He often doesn’t know what year it is or what state he’s in. Maybe he doesn’t know what senate he was in? He could have been thinking of the Republican Roman Senate and he was competing for votes for consul or one of the lesser magistracies against a Senator named Georgius (a valid Latin name).

He leads a rich fantasy life (he didn’t just plagiarize one of former British Labour Party leader Neal Kinnock’s speeches, he plagiarized Kinnock’s entire bio). Maybe he’s created a complete persona for Corn Pop, and his imaginary nemesis had the government name George. Or he was hallucinating about the early 1970s “All In The Family” spinoff “The Jeffersons,” and was thinking about Weezie’s husband George.

Who in all of hell’s creation knows or cares about the real or imagined identity of “Mysterious George” (FFS, it could even be the fictional chimpanzee “Curious George” in the children’s book Jill reads to him at night). Just tell him he beat (insert name here), that the assisted living home where his family will warehouse him after the election is the White House, stick him at a table in the corner of the rec room with a bunch of coloring books, and when he demands the nuclear codes hand him a puddin’ cup or have an orderly (tell him the white uniformed individual is his military aid) spoon feed Dementia Joe some pureed Gerber’s baby food. Just call the jar of baby food “the Football” and he’ll never know the difference.

Except when she clearly mouths the name “Trump” every time Dementia Joe forgets his lines and instead says he’s running against “George.”

Which means the MFM is completely full of s%#t when they claim Biden was talking to George Lopez. Lyin’ Buy’d-in was clearly talking ABOUT his opponent who he thought is named George, not talking TO someone named George.

Exactly as “Dr. Jill” thought, along with everyone else.

It’s known clinically as “MCI”, mild cognitive impairment. It only gets worse with time.