LIVE: Trump expected to leave hospital, head back to the White House

LIVE: Trump expected to leave hospital, head back to the White House

Updates as we have them 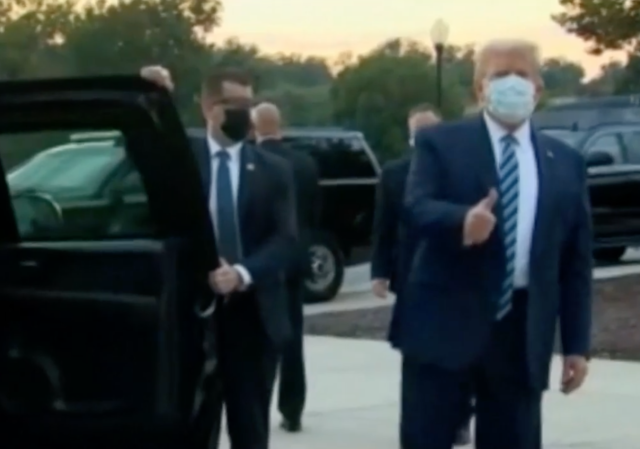 Trump is expected to be discharged from the hospital after a brief stay at Walter Reed to treat the Wuhan Coronavirus. We’ll be posting updates as we have them. Refresh often. Most recent updates will be up top.

2
notamemberofanyorganizedpolicital in reply to Colonel Travis. | October 5, 2020 at 8:19 pm

Trump Out Of The Hospital Back To The White House

Darn. Lots of the videos and graphics are not loading on the mobile site.

“The only thing we have to fear is fear itself.” – a certain past President who endured worse than COVID-19.

I wouldn’t laud that particular president too much, he was the fascist that locked American citizens into concentration camps based on race.

As I recall, FDR received a lot of intelligence to the effect that a Japanese fifth column was active in espionage and possible sabotage, in anticipation of a Japanese invasion of the west coast of the CONUS.
Unlike the American Bund, whose appeasement- and German-favoring members held large public meetings, the covert Japanese threat was a good bit more difficult to investigate. Given how different views were back then from today’s, I think the interment, while regrettable, was more based on worries along those lines than on race.

It was only internment, thankfully not interment!

Oops. Agreed. Thanks for the spelling correction!

This rationalization doesn’t explain why the internees had to be financially ruined as well.

Nor does it address the documented fact that the military commands closer to the potential problem (that is, California and the West Coast) were far more concerned about the legal rights of these American citizens than was Washington. The internment can’t be ascribed to local panic—unlike the press or the civil Washington government, the military types on the spot didn’t seem unduly concerned about an invasion which was never going to happen. Washington and the West Coast bombarded each other with memos, so this is well documented.

There certainly were Japanese intelligence agents operating in areas such as Pearl Harbor (and, I’d imagine, San Diego, though evidence for that is scanty) but they were neither Americans nor foreign residents, but transient personnel attached to Japanese embassies and consulates.

And, of course, FDR had reams of intelligence about Japanese intentions, but went out of his way to misinterpret it, perhaps most famously with a fervent belief that the major attack would be in the Philippines (an area which was nevertheless left woefully unprepared).

No, whether examined superficially or in detail, it’s very hard to let FDR off the hook for this particular crime.

There is a long way to go to fix the Obama Plague.

Treatment has come a long way, especially knowing how much the immune system should be suppressed to stop organs from being destroyed.

“Remember, darling, it’s not how you feel, it’s how you look”

I hope that Trump is actually feeling well, and that he does not push himself too hard while recovering.