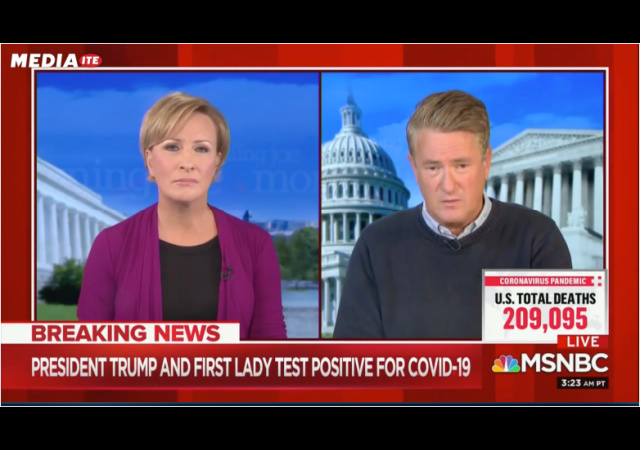 SCARBOROUGH: ” — back at least two weeks, at least three weeks. The President obviously telling us from the debate stage on Tuesday night he wants to expedite her nomination as quickly as possible because he wants her vote on any challenge that he has to the outcome of election results. Again, with — if you do the contact tracing, it seems that that is unlikely to happen over the next few weeks, at least until everybody is cleared.”

VIDEO – Joe Scarborough Wonders If the Supreme Court Nominee and Mitch McConnell Have Been Exposed To Covid https://t.co/2MbnlgNDoe

It’s not just Scarborough, you can see the narrative developing overnight.

Just noted on MSNBC by @JonLemire: Trump's chief of staff Mark Meadows, who is around Trump often, has spent time in the last 24 hours or so with Judge Amy Coney Barrett. Might Meadows and Barrett have to quarantine? If so, what would that mean for the confirmation hearings?

Serious question: Does this mean that Amy Coney Barrett and all the senators with whom she met earlier this week need to quarantine for 14 days?

Just how does Trump’s COVID affect the Syphilis of the Democrats ?