The Great Battle of The Ithaca Commons will be told for generations (sarc). 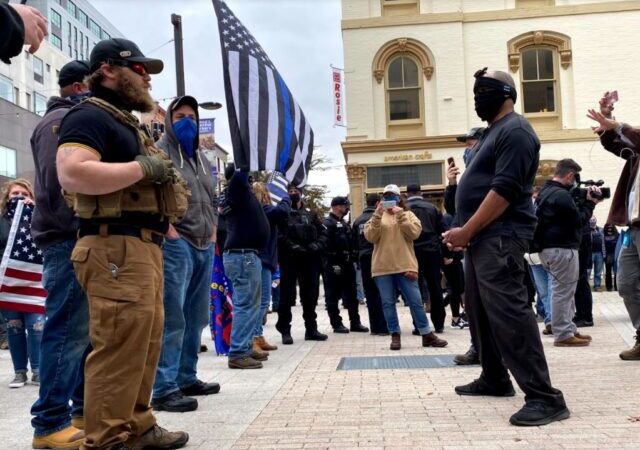 A pro-Trump rally in ultra-liberal Ithaca, New York, resulted in an attack by a crowd organized by Ithaca Democratic Socialists, as we reported on Sunday, October 17, 2020, Pro-Trump Rally Attacked In Liberal Ithaca (NY):

Ithaca, NY, home to Cornell University, is a notoriously liberal town. That liberalism, both on and off campus, is taking on an increasingly intolerant and totalitarian tone, as was just demonstrated when a small pro-Trump rally was attacked by a crowd organized by the Ithaca Democratic Socialists, but also carrying Black Lives Matter and anarchist flags and posters….

Though the local news reports tried to put a ‘both sides to blame’ spin on it, it is clear from video provided to Legal Insurrection by Trump rally organizer Rocco Lucente, that the DSA crowd attacked the Trump supporters, not the other way around. The video also shows graffiti sprayed on the storefront used by the pro-Trump group….

I noted at the time that the same organizers planned a Back The Blue rally for the heart of downtown Ithaca, the Milton Pavilion on The Commons. It’s a location frequently used for concerts, and also every Sunday for Black Lives Matter protests.

To hold a pro-police rally in the proverbial belly of the beast was considered a provocation.

In anticipation of the Back The Blue rally, local activists underwent “riot training”, WENY reported:

Following last Friday’s Trump Rally and in anticipation of the up and coming Back the Blue Rally, Ithaca’s protesters spent this last Sunday doing riot training.

Speakers were talking to the group about the repercussions that could come from being involved in the protesters and told attendees that they should be aware they could end up with a criminal record from attending.

The training that took place at the protest consisted of barricade training, linking arms, and dealing with tear gas.

Black Lives Matter and Antifa supporters were furious that “fascists” would come to The Commons, and there was a lot of chatter of Facebook about turning out large numbers to chase them away. Ithaca Democrat Socialists organized a counter protest to take place at the Milton Pavilion — the place planned for the Back the Blue rally at 2 p.m. — starting at Noon. That way, the counter-protesters would occupy the place where the Back The Blue rally was supposed to take place, almost guaranteeing a turf fight.

The Facebook chatter was a lot of virtue signaling. You’d think these Ithaca liberals actually thought they were fighting ‘fascism’ rather than people who merely disagree with them as to Trump and the Police. They were heroes in their own minds, ready to create stories they could tell their grandchildren about how they drove the ‘fascists’ off The Commons, much like our great grandfathers drove the Nazis off the cliffs at Normandy. While there are some dangerous elements among the Ithaca Resistance, for sure, most of them are wannabee virtue signalers.

The chatter was sufficient, however, that Ithaca Mayor Svante Myrick and the Ithaca Police issued an extraordinary statement on Facebook in which they called for protests to be canceled and said the police could not guarantee participant safety.

The Back The Blue rally, at the urging of the police, was moved to a different location at The Commons, so there would be a couple hundred yards (my guesstimate) separating the two groups. (The new location was near North Cayuga, for those of you familiar with the area.) 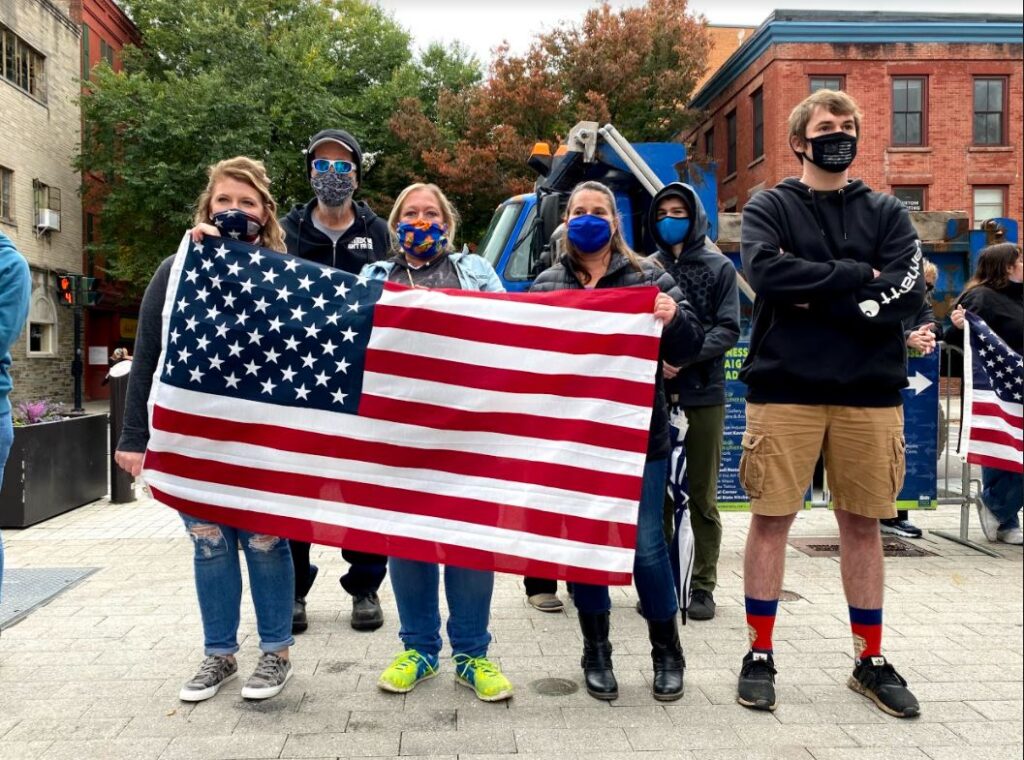 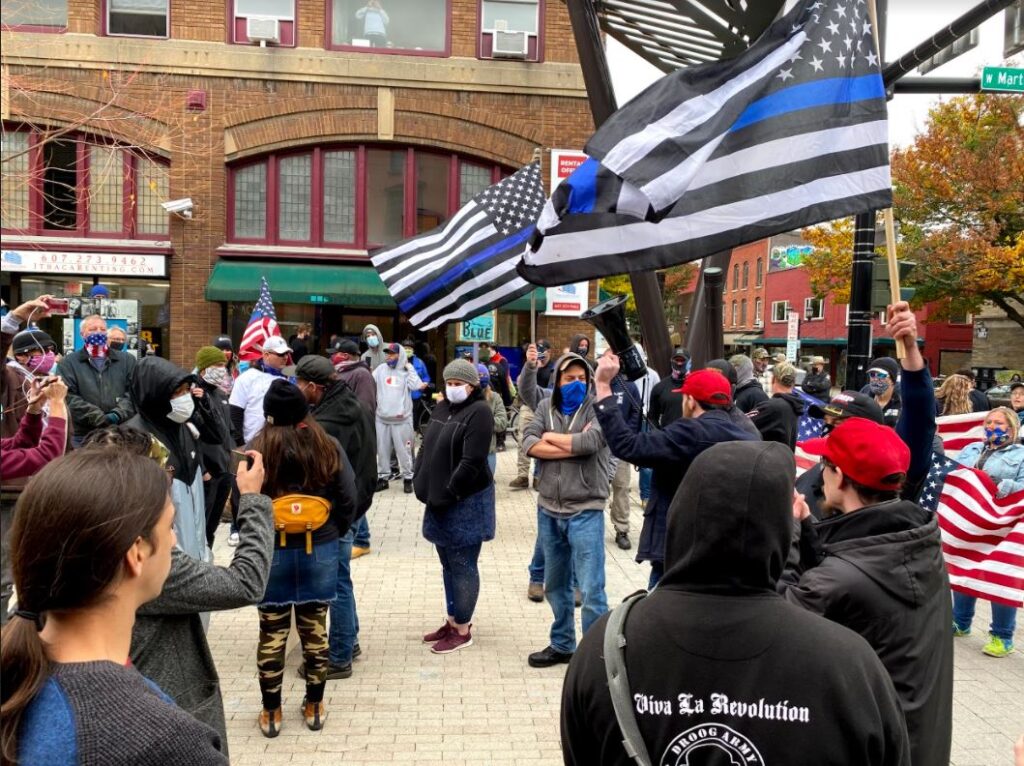 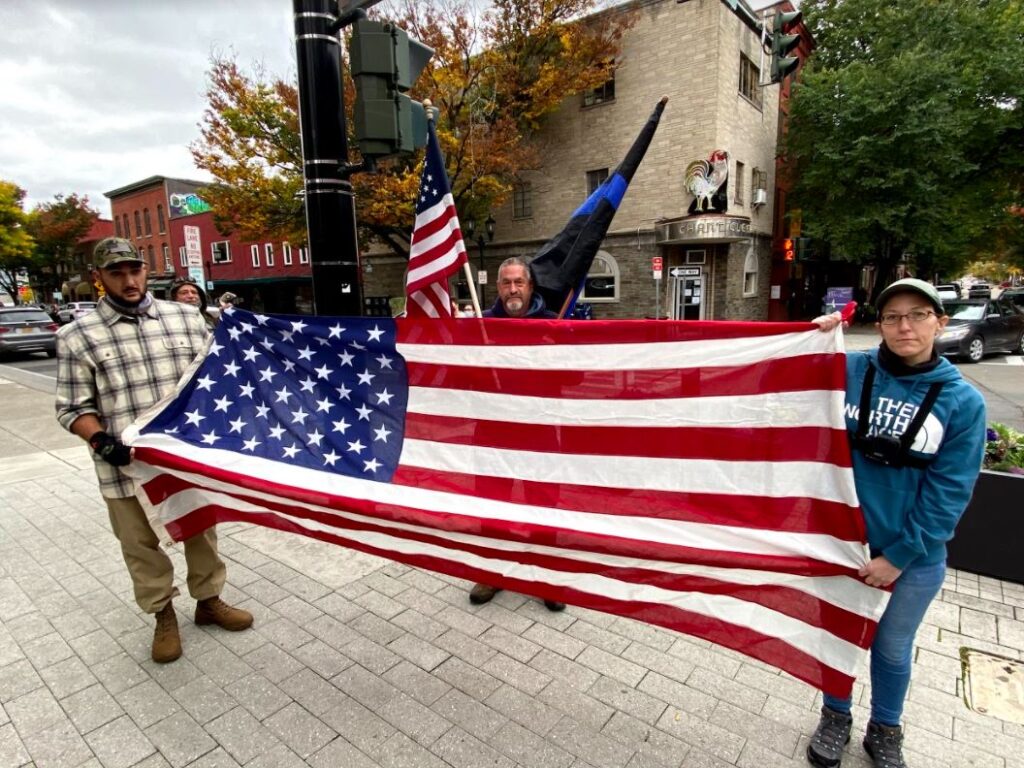 Legal Insurrection had a photographer on the ground at The Commons, and we also observed several livestreams.

The Back The Blue rally consisted of 3-4 dozen people, carrying flags and chanting. A small number of counter-protesters approached them at that location and tried to engage them, but there were people there from the counter-protest group telling them not to provoke anything. There was one person in the Back The Blue group who had a button that said “Proud Boys.”

The Back the Blue rally then marched down the commons towards Milton Paviliion. There was a heavy police presence. The Milton Pavilion had a lot of people, but it’s hard to get a good estimate, in part because a large banner blocked the view making it seem like there was a mass of people behind it. But a somewhat overhead photo I saw indicates that the pavilion was not densely packed behind the banner. My gueestimate is about 100-150 people.

There were Antifa and Black Lives Matters flags and posters, and plenty of synchronized chanting with bullhorns, and some dancing. 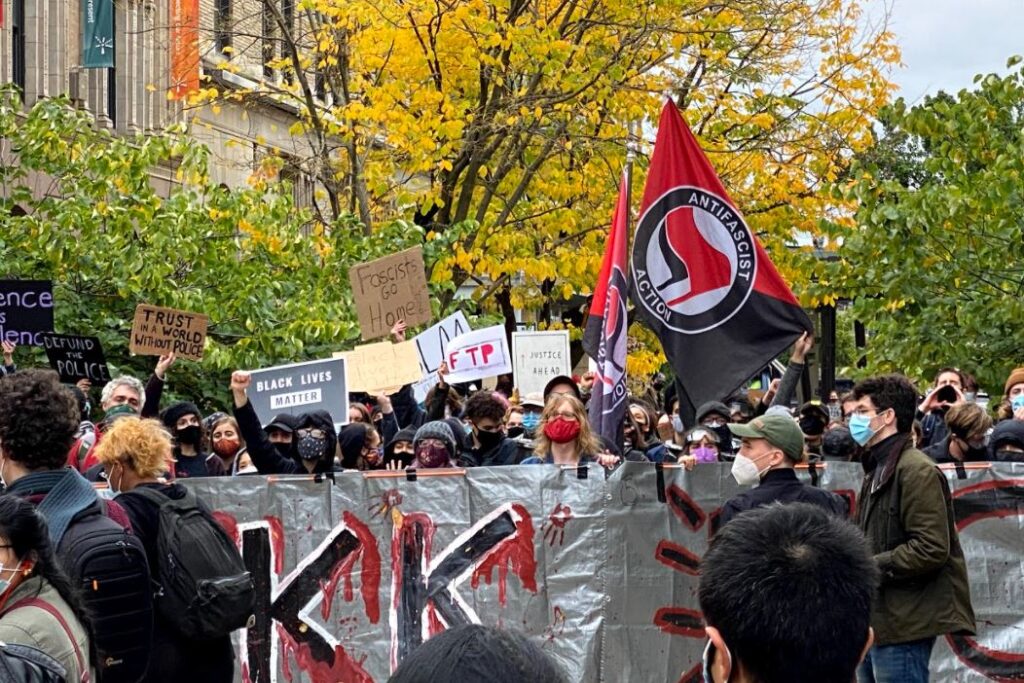 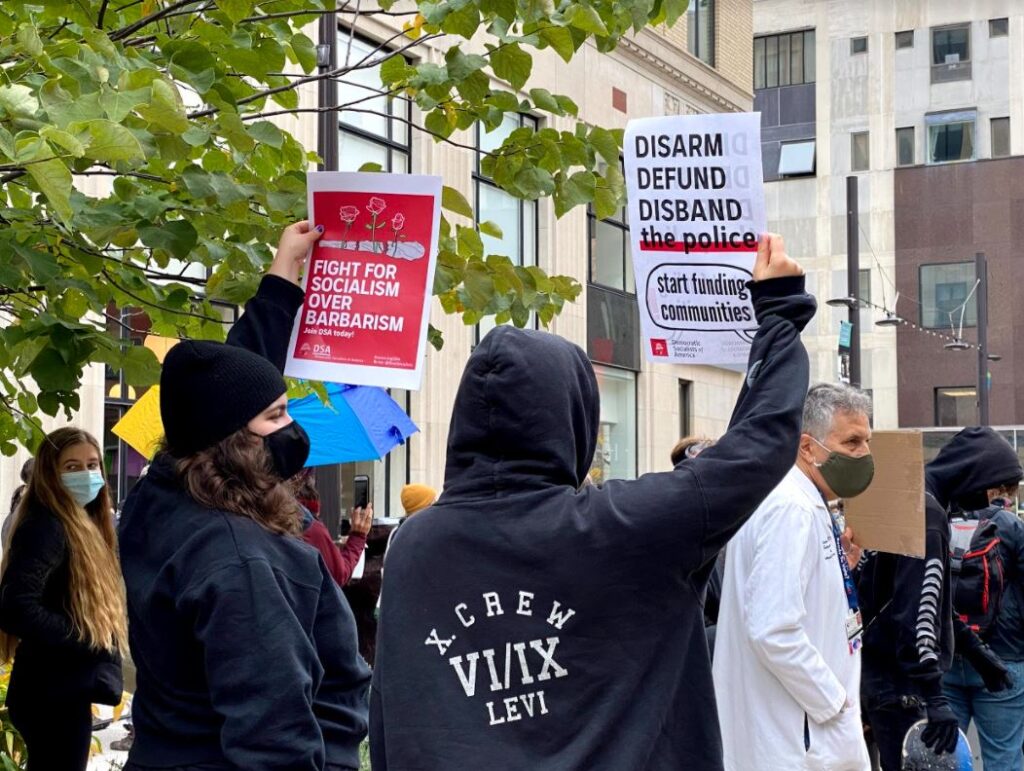 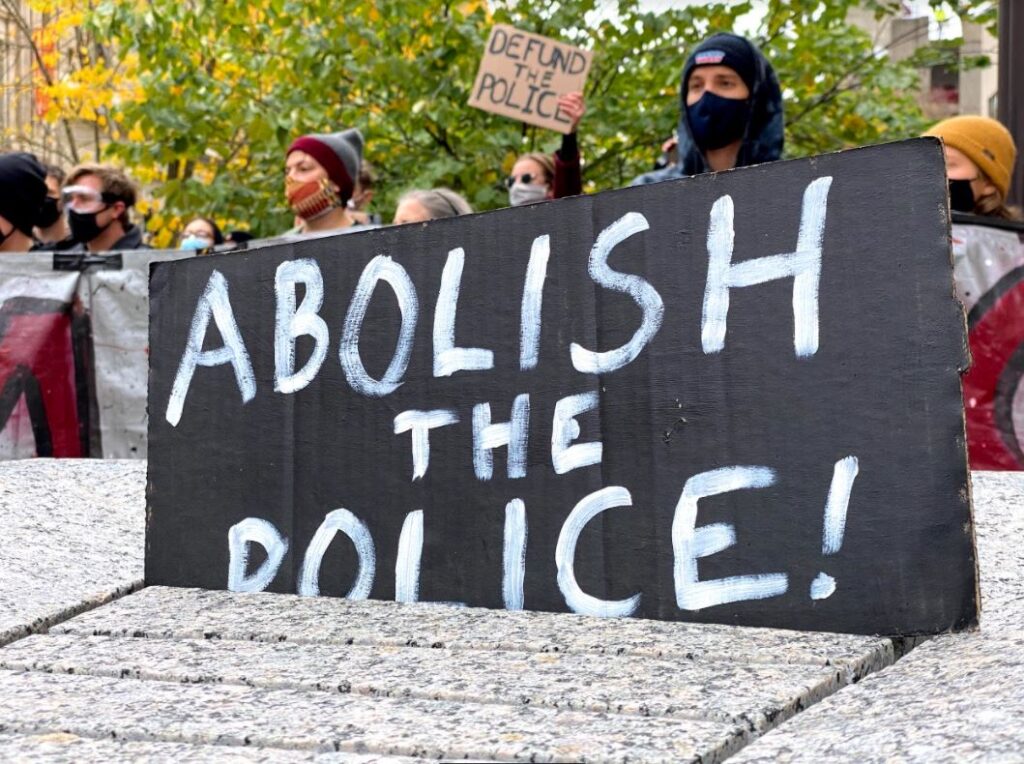 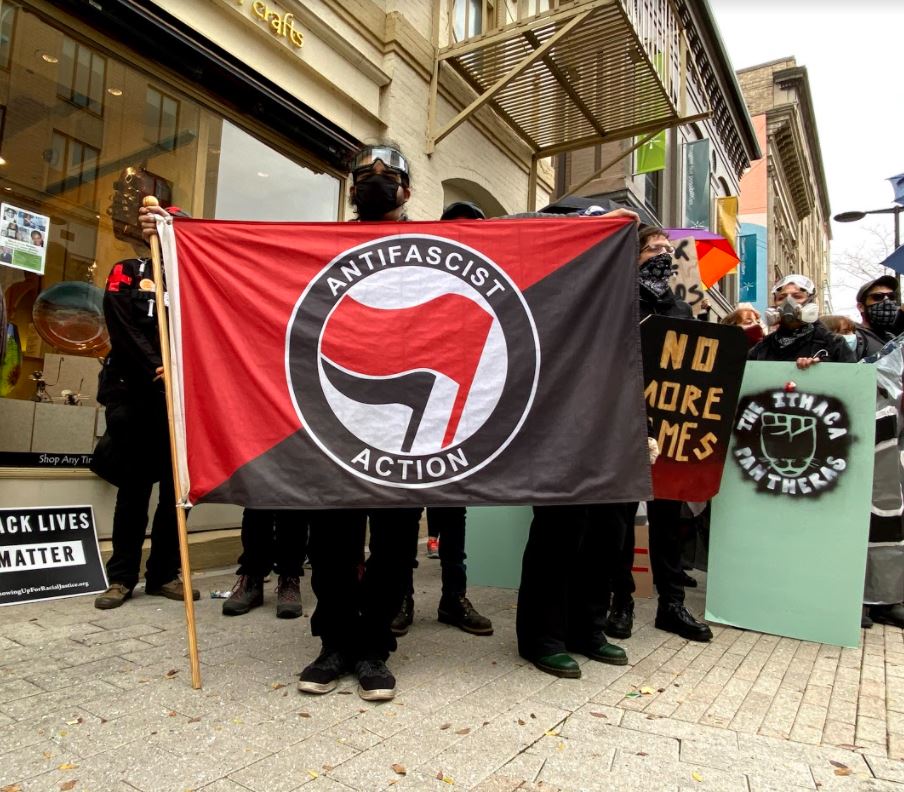 A small number of counter-protesters moved right up to the Back The Blue protesters in a threatening manner, but were urged back by their compatriots so as not to provoke a physical confrontation. Police also then moved in between the two groups. 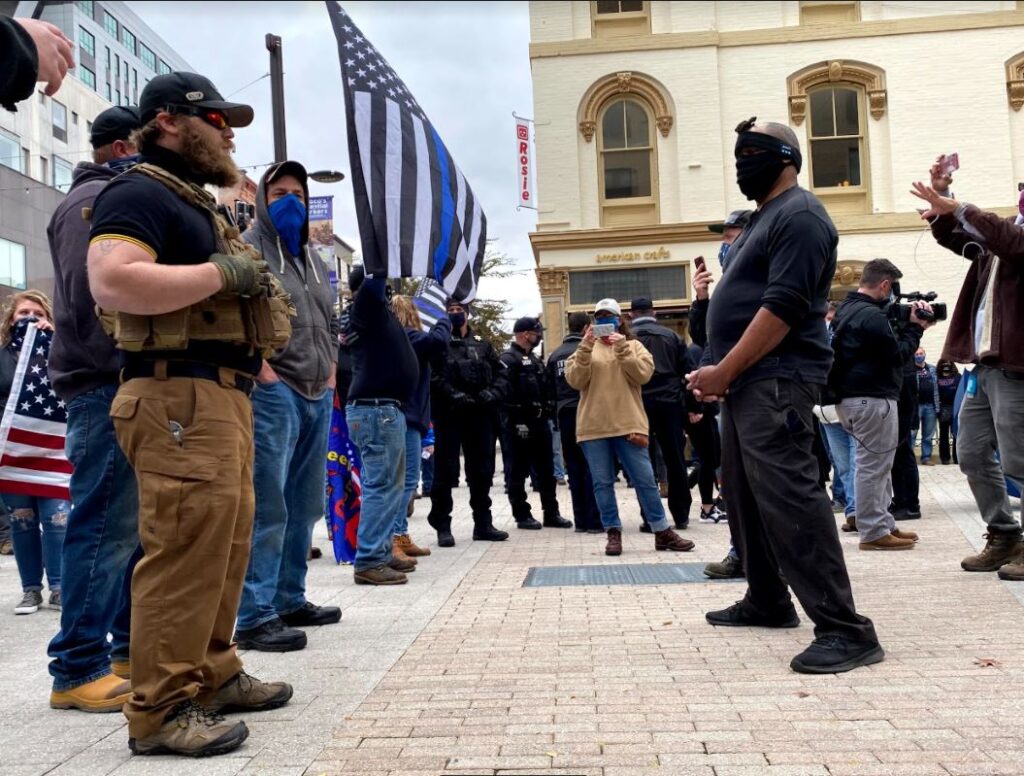 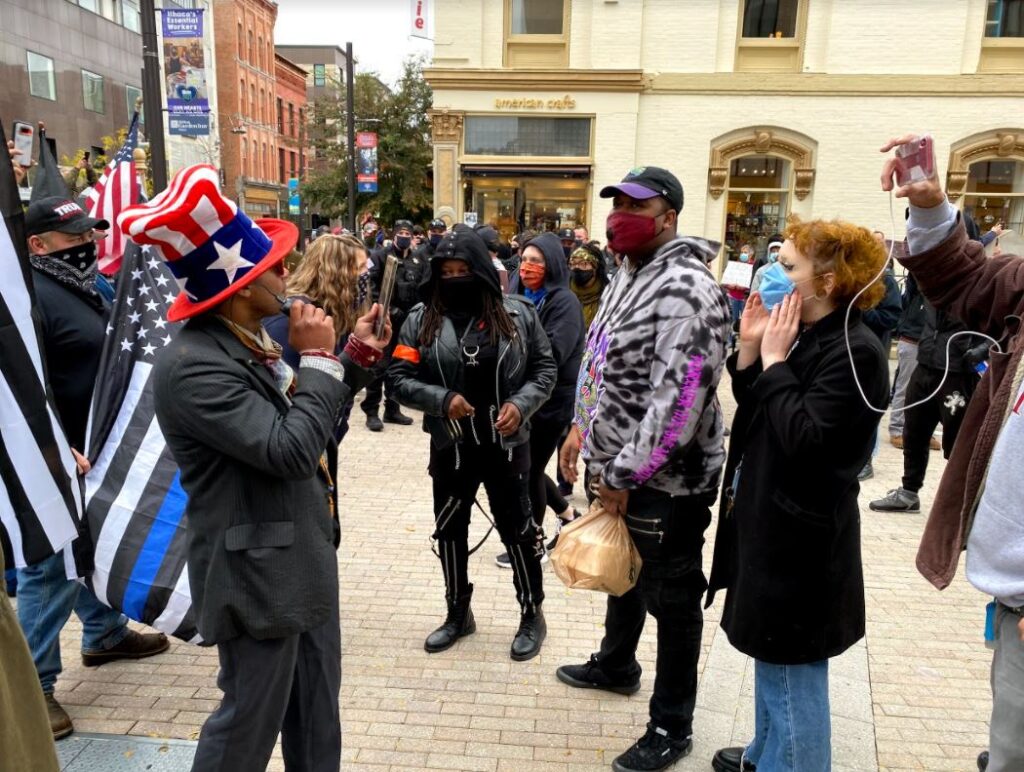 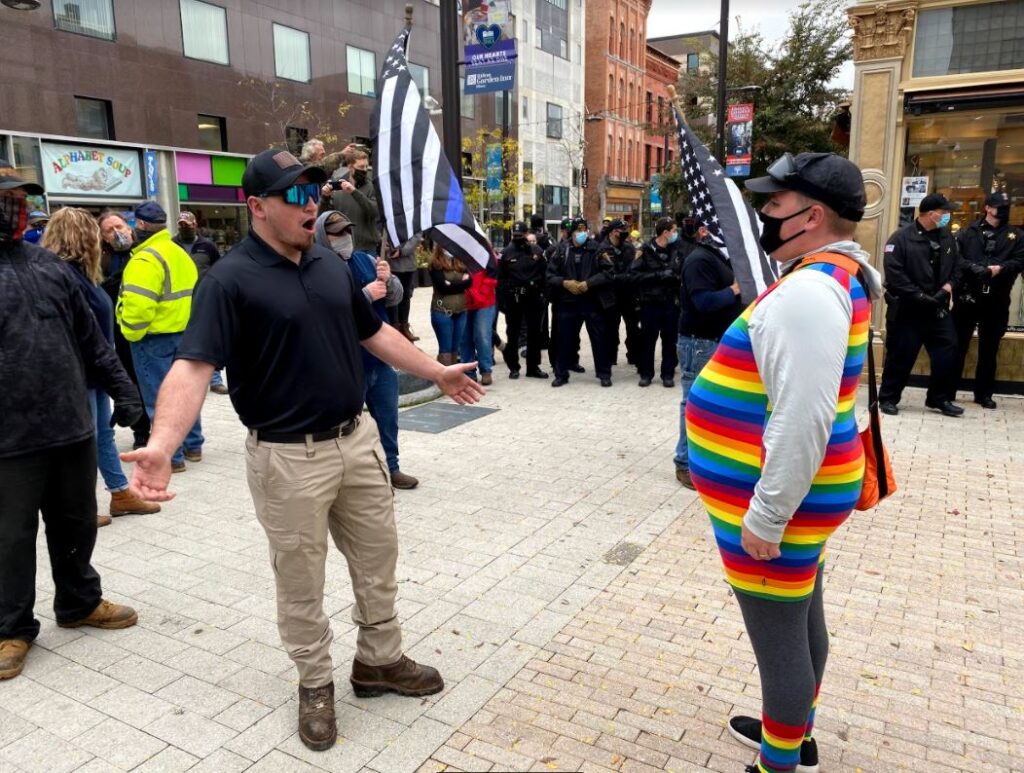 And thus it proceeded for almost an hour before the crowds dispersed.

The Great Battle of The Ithaca Commons will be told for generations, it will become a thing of liberal legend, thousands of people will say they were there.

[VIDEO TO BE ADDED WHEN READY]

Please! Tell me that is/has a more than passing resemblance to a man in that rainbow striped outfit. The alternative is absolutely frightening.

Odysseus is probably turning in his grave at the spiritual sight of this scene in a city named after his own island-kingdom.

“What happened to some of the men (those on the “Antifa” side of the skirmish)?” he might be asking. “Where is their sense of honor and duty to safeguard their women-folk in any case?” he’d want to know.

“Has this society, derived in part from our greater Greek culture, changed gods, or have the same gods so drastically changed this society?” he’d further wonder.

“Who or what leads the one side and the other, and to what end?” he’d ask finally.

“Quo vadimus,” he’d be translated; in the end, where are we going? “What will our joint telos be if we do indeed have a goal, a destined task?” Do we?

Or are we destined merely to conflict, to battle, to wage war against one anther?

Odysseus wants to know, it seems, whether all his struggles — not merely to survive, but triumph; to return to a civil and esthetic, virtuous life — were in vain.

We may soon learn — domestically or from abroad, or via both.

There won’t be any BLM/antifa grandchildren. I amfullyconfident they will “abort them all!”