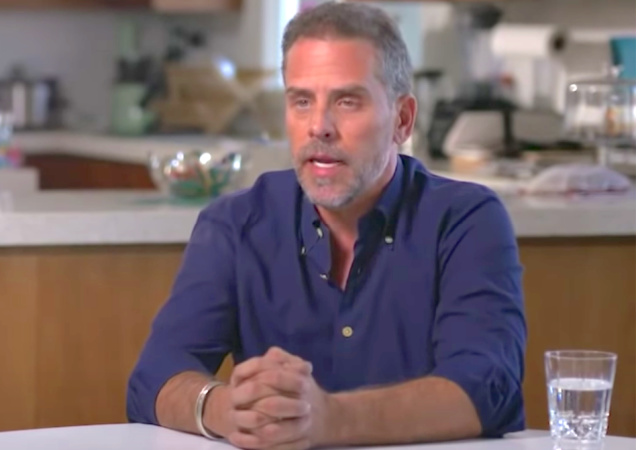 Emails show that Hunter wanted to have “lasting and lucrative” deals with the top Chinese private energy company, which would bring in tens of millions for his family.

The company was CEFC China Energy Co. based in Shanghai. Chairman Ye Jianming vanished in 2018 after Chinese authorities took him into custody.

One email sent to Biden on May 13, 2017, with the subject line “Expectations,” included details of “remuneration packages” for six people involved in an unspecified business venture.

Biden was identified as “Chair / Vice Chair depending on agreement with CEFC,” an apparent reference to the former Shanghai-based conglomerate CEFC China Energy Co.

His pay was pegged at “850” and the email also noted that “Hunter has some office expectations he will elaborate.”

A provisional agreement stated that four people would split 80% of the new company’s shares. Initials identified the four people, which correspond with the four people involved in the email: H, RW, JG, and TB.

There was also 10 for Jim and “10 held by H for the big guy.” The emails did not identify this big guy.

The hard drive obtained by The New York Post contained a photo from August 1, 2017, of a “flowchart of ‘Hudson West’ split 50/50 between two entities ultimately controlled by Hunter Biden and someone identified as ‘Chairman.'” 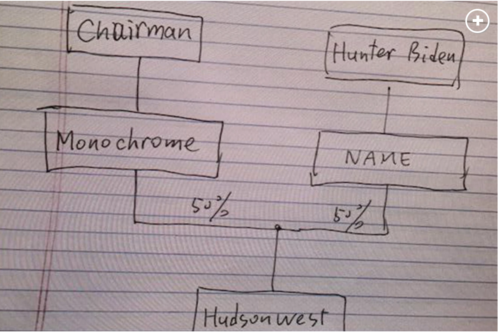 Reports stated that “a company called Hudson West III opened a line of credit in September 2017.” Hunter, along with his Uncle James Biden and wife Sara, used credit cards connected to this account “to purchase more than $100,000 ‘worth of extravagant items, including airline tickets and multiple items at Apple Inc. stores, pharmacies, hotels and restaurants.'”

The company dissolved. Owasco PC, Hunter’s law firm, “was one of two owners.”

Flowchart Connected to Deal With CEFC?

The photo could have something to do with an email chain dated August 2, 2017. Hunter emailed about a deal with Ye (emphasis mine):

Another email — sent by Biden as part of an Aug. 2, 2017, chain — involved a deal he struck with the since-vanished chairman of CEFC, Ye Jianming, for half-ownership of a holding company that was expected to provide Biden with more than $10 million a year.

Ye, who had ties to the Chinese military and intelligence service, hasn’t been seen since being taken into custody by Chinese authorities in early 2018, and CEFC went bankrupt earlier this year, according to reports.

Biden wrote that Ye had sweetened the terms of an earlier, three-year consulting contract with CEFC that was to pay him $10 million annually “for introductions alone.”

“The chairman changed that deal after we me[t] in MIAMI TO A MUCH MORE LASTING AND LUCRATIVE ARRANGEMENT to create a holding company 50% percent [sic] owned by ME and 50% owned by him,” Biden wrote.

“Consulting fees is one piece of our income stream but the reason this proposal by the chairman was so much more interesting to me and my family is that we would also be partners inn [sic] the equity and profits of the JV’s [joint venture’s] investments.”

An “Attorney Engagement Letter” came to be in September 2017 between Chi Ping Patrick Ho, a top lieutenant to Ye and former Hong Kong official, and Hunter:

The documents obtained by The Post also include an “Attorney Engagement Letter” executed in September 2017 in which one of Ye’s top lieutenants, former Hong Kong government official Chi Ping Patrick Ho, agreed to pay Biden a $1 million retainer for “Counsel to matters related to US law and advice pertaining to the hiring and legal analysis of any US Law Firm or Lawyer.”

Ho had some criminal problems in America:

In December 2018, a Manhattan federal jury convicted Ho in two schemes to pay $3 million in bribes to high-ranking government officials in Africa for oil rights in Chad and lucrative business deals in Uganda.

Ho served a three-year prison sentence and was deported to Hong Kong in June.

There are only a few reasons one would be obligated to call the authorities while servicing a computer. I’m assuming Hunter has an Anthony Weiner problem and it ain’t Hillary’s emails.