The suspect, a known ‘anti-Islamophobia’ campaigner, reportedly created “one of the videos in which the father of a girl in the school accused the teacher, Samuel Paty, of having insulted Islam.” 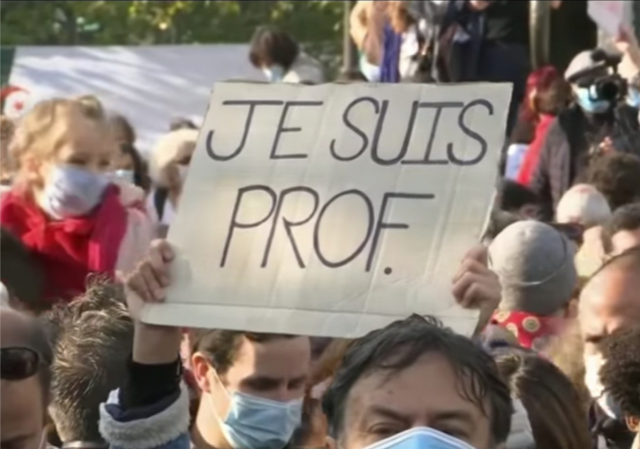 Police in France have arrested a Muslim leader who reportedly issued a fatwa, or the Islamic death warrant, on the school teacher beheaded in Paris on Friday, the French-language newspaper Le Soir confirmed on Monday.

The suspect, Abdelhakim Sefrioui, leads an organization called “Cheikh Yassine Collective,” which was set up in the memory of Sheikh Ahmad Yassin, the slain founder of the Gaza-based terrorist group Hamas.

Apart from running the Hamas-linked group, Sefrioui was a prominent “anti-Islamophobia” campaigner in France. The left-wing UK newspaper Guardian described him as a “well-known Islamist radical with links to the organisation who routinely uses social media and local campaigns to pressure the government over alleged Islamophobia.”

Sefrioui created “one of the videos in which the father of a girl in the school accused the teacher, Samuel Paty, of having insulted Islam,” Reuters reported.  The father of the girl was also arrested in this connection.

“They apparently launched a fatwa against the teacher,” French Interior Minister Gerald Darmanin said on a radio show referring to these two men.

Following these calls, the 47-year-old middle school teacher was beheaded by a Muslim refugee from Chechnya, Russia. Days ahead of the killing, Paty had shown Mohammad caricatures from the Charlie Hebdo magazine to his class as part of a lecture on free speech. The attacker, before being shot down by the police, was heard shouting “Allahu Akbar.” He also posted the photos of the victim on Twitter, and wrote insults calling President Emmanuel Macron and French people “infidels” and “dogs,” BBC reported.

The Times of Israel news website on Monday reported the arrest of the Hamas-linked activists:

The father of a student and the head of an Islamist pro-Hamas group urged the killing of a French teacher who was beheaded for showing pupils cartoons of the Prophet Mohammed, France’s interior minister said Monday, adding that police had carried out dozens of raids in connection with the attack.

“They apparently launched a fatwa against the teacher,” minister Gerald Darmanin told Europe 1 radio of the two men, who are among 11 people being held over the deadly attack by a young Chechen man.

One of the men was named as Abdelhakim Sefrioui, president of the “Cheikh Yassine collective.” Sheikh Ahmad Yassin was a founder of the Hamas terror group. He was killed in an Israeli airstrike in the Gaza Strip in 2004.

According to French newspaper Liberation, Sefrioui was known to French security services for his Islamist activities and anti-Semitic speeches.

In July 2014, Sefrioui participated in protests in Paris, chanting slogans in praise of Palestinian terror groups Hamas and Islamic Jihad.

He reportedly denounced the teacher in a video posted to social media a few days prior to the attack. (…)

A photo of the teacher and a message confessing to his murder were found on the cellphone of his killer, 18-year-old Chechen Abdullakh Anzorov, who was shot dead by police.

Witnesses said the suspect was spotted at the school on Friday asking pupils where he could find Paty.

The beheading of the Parisian teacher also highlights the role played by Islamic charities and NGOs in radicalizing France’s growing Muslim population. Many of these organizations are working to establish the dominance of Islamic doctrine, or Sharia, in France by silencing dissent in the name of “Islamophobia.”

French Interior Minister Darmanin called for the disbanding of a leading “Islamophobia” lobby group, “Collectif Contre l’islamophobie en France” (CCIF). He described the CCIF and similar groups as “enemies of the Republic.” The country “must stop being naive and face the truth: there is no possible accommodation with radical Islamism,” he added.

“Fear is about to change sides. Islamists must not be allowed sleep soundly in our country,” Macron assured on Sunday.

Despite clear and harsh words, it is unclear if Macron’s government is willing to take actual measures to stem the rising tide of radical Islam in the country. According to European Union counter-terrorism data released three years ago, France is home to 17,000 radical Muslims. Given Europe’s open borders policy towards immigrants from Muslim-majority countries of North African and the Middle East, the figures for Britain, Germany, and other Western European states are just as alarming.

Marine Le Pen, France’s top opposition politician, slammed Macron’s remarks as inadequate to face the threat of Islamism. She called for a “wartime legislation” to combat jihad in France.

“Against an organized and already installed force … our president has proposed an inadequate and anachronistic containment strategy,” Le Pen, who heads the National Rally party, said. “The situation calls for a strategy of reconquest.”

There is no “radical Islam”. There is only Islam.

The radical muslim cuts your head off while the moderate muslim holds your feet.

Considering the moons of Mars are named Phobos and Diemos after the twin sons of Aries and Aphrodite and the names translate to Fear and Loathing, maybe we should stop calling it Islamophobia and instead call it Islamodemia. Don’t fear it. Loathe it.
.

The French would be more than oral flatus if they were spoken against a background of a burning mosque with men being shot running out of it.