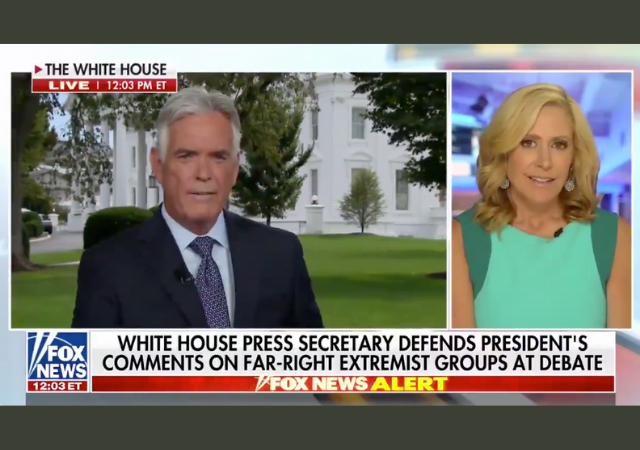 WTF? He's pushing a false narrative in the face of the actual facts. pic.twitter.com/oTyziCnn0d

But it gets better. Roberts’ wife is a reporter who covered the exact same story less than 24 hours before. Something White House Press Secretary later reminded him.

.@johnrobertsFox I would refer you to your wife’s reporting from 21 hours ago… accurate reporting I cited in the White House Press Briefing. https://t.co/dV3Hzp1UaI

On the LEFT: Trump denounces white supremacy on Wednesday while speaking to John Roberts' wife

And then Roberts lost it. He’s mad that people on Twitter are calling him out for pushing what is clearly a false narrative. So embarrassing. His co-anchor is also a bit shell-shocked, which is just hilarious.

He is trash. The sooner we begin treating people like him and his trash whore wife like trash the better. They believe they can slim you, your family, kids and neighbors without retribution. I believe it is time we begin to throw it back at them twice as hard. Give them a dose of their own medicine.

There is an irony here. “White supremacists”, etc. are citizens of the United States and are protected by the First Amendment. As long as they’re not breaking laws, the president – or any other politician – has no right to “condemn” them. They do not advocate the overthrow of the government as Antifa does – look at their web sites. BLM is organizing “protests” that turn into riots. The First Amendment was adopted by the first US Congress BECAUSE there are differences of opinion and “the people” shall not use the Federal government to stifle those they do not agree with.

What the hell is wrong with John Roberts? The video/audio of PDT’s post-Charlottesville presser is CLEAR — essentially that there are good people on both sides of the (statue-removal) issue, and that he was NOT including on the right the KKK, neo-Nazis, other extreme, right-wing activists, etc, all in one sentence, so not in separate segments.

The TDS pitch has now reached psychotic dimensions. Trump misspoke, he meant to stay “down,” not “by”; the inference is easily reached when viewing the transcript. POTUS should simply say so. That he hasn’t yet, in my view, doesn’t reasonably justify JR’s gratuitous assault on his character.

So in this case, see ya, John. I might someday, once again, respect and admire your work. But, right now, you’re all stressed out and well over the edge. Take a sick leave and get some serious, professional help. You’re delusional, guy. Your patent anger is a sure symptom you’re ailing, and a sign to the wise.

John Roberts name WAS on Epstein flight log as a passenger. Epstein had his connections everywhere.
If you believe it’s just a common name and MAYBE it wasn’t him…I have lake front property to sell you in Rainbow City.