Every sector saw job growth except for government. 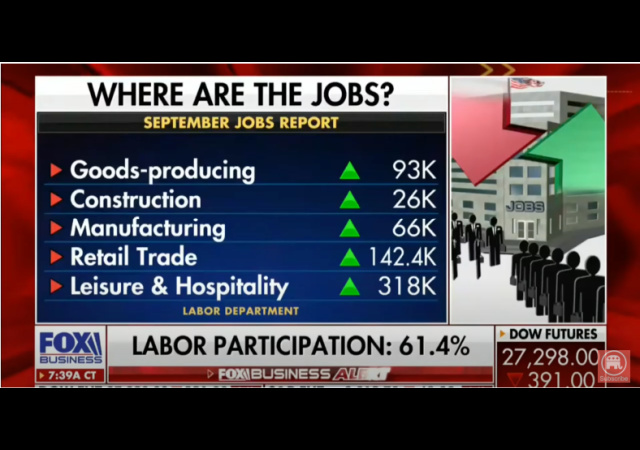 The September jobs report, the last one before the election, revealed the economy only added 661,000 jobs.

However, the unemployment rate sits at 7.9%. The economy has also recovered 12 million jobs since the COVID-19 outbreak in mid-March, which saw around 22 million layoffs.

The employment-population ratio is at 56.6%.

The unemployment rate fell by 0.5% to 7.9%. The unemployed persons number declined by 1 million to 12.6 million.

Both of those measures fell for five consecutive months.

Temporary layoffs went down by 1.5 million to 4.6 million, well below the 18.1 million in April.

The COVID-19 pandemic has caused many businesses to shut down. This could explain why permanent job losses increased by 345,000 to 3.8 million in September. Also, unemployed job leavers (people who quit or volunteer to leave and look for new employment) went up by 212,000 to 801,000.

Other points in the report:

Every sector added jobs, except for government:

The country is slowly reopening, but governments have started to instill new lockdowns and restrictions as some areas see outbreaks.

Weekends are busy for some businesses, but the weekdays remain slow:

Andrew Fritz, co-owner of Citizen Public House restaurant in Scottsdale, Ariz., voluntarily reduced his dining room hours and capacity in July as new coronavirus cases in the state spiked. He increased those hours and rehired workers about a month later, but said the restaurant is still operating with less than half of its pre-pandemic staff. Sales over the past two months have fluctuated around half the levels seen a year earlier.

Mr. Fritz said demand has been strong on the weekends. During the week, he added, business has been much weaker and more customers are ordering carryout meals, which tend to have a lower sales value.

“We’re shedding money every week,” Mr. Fritz said. He expects the restaurant could break even if revenue rose by another $5,000 to $10,000 a week. “But a break-even scenario is a really ugly scenario, because we’re doing it by cutting peoples’ salaries and wages and hours.”

I imagine weekend business will continue to boom since football season kicked off a few weeks ago.

It would be interesting to see the geographic breakdown of the long-term unemployment by state. I suspect that the longer term numbers are more prevalent in the blue government lock down states.

That’s just common sense. If the state has remained in an artificial top down non economic shutdown since March obviously the folks drawing unemployment can’t go back to work if their employer is prevented by the state from reopening.

The economy is recovering. However, we will have to see how fast and to what extent it recovers.

“Below Expectations”…whose expectations?
1. Someone who knows what they’re talking about or some media propagandist?
2. Did they take the DemonRat governors’ sabotage of the economy into consideration?

An hurrah for decline in government jobs.