Big Tech has been at war with conservatives and Republicans for years, today was just the surprise attack that makes it impossible to ignore anymore. 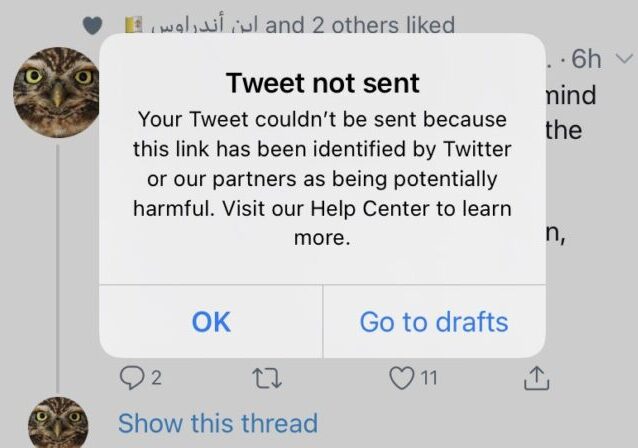 The big story of the day was a NY Post blockbuster that shows Joe Biden may have been lying all along about what and when he knew his son Hunter was selling access to his father, the then Vice President of the United States.

We covered the story and the imporant findings earlier, Emails: Top Ukrainian Exec Asked Hunter How to ‘Use Your Influence’ on Burisma’s Behalf.

You know what @benshapiro? Perhaps if you and others like you would have stood up for Alex Jones in the early days we wouldn't be here now. Remember this going forward.

Does the NY Post story completely prove the case — no, but it proves a lot more than we previously knew, and calls into serious doubt Joe Biden’s previous denials. Joe’s campaign promptly called “a lid” on the campaign, taking Joe off the trail so he couldn’t be questioned by reporters.

Then Facebook and Twitter came to Joe’s aid, attempting to call a lid on the spread of the story.

Folks, if you don't understand, this is @Facebook warning you that they may put a strike on your page if you post @nypost article, and if you get multiple strikes, they will throttle your page reach, if you post this story. They are protecting Biden, they are biased. https://t.co/Kcx7uA3c3J

We covered that censorship earlier today as well, and it got worse as the day went on, with locked account, deleted tweets, and inability to share tweets and Facebook posts.

This is a Big Tech information coup. This is digital civil war.

I, an editor at The New York Post, one of the nation’s largest papers by circulation, can’t post one of our own stories that details corruption by a major-party presidential candidate, Biden.

This is a Big Tech information coup. This is digital civil war.

I, an editor at The New York Post, one of the nation’s largest papers by circulation, can’t post one of our own stories that details corruption by a major-party presidential candidate, Biden. pic.twitter.com/BKNQmAG19H

Today was a declaration of digital war.

As with many wars, it doesn’t start when war is declared. Al-Qaeda was at war with us long before 9/11. And Big Tech has been at war with conservatives and Republicans long before Facebook and Twitter came to Joe Biden’s assistance, an assistance they never rendered against the 4-year avalanche of anti-Trump fabrication and baseless conspiracy claims that flourish to this day on those platforms.

Today was a long time coming. Just the other day, on Legal Insurrection’s 12th Anniversary, I reprinted my 2017 concern about Big Tech:

Imagine living in a repressive country in which the government blocked access to and suppressed internet content. You don’t need to move. It’s coming here but from private industry. This is, in many ways, more dangerous than government suppression of free speech because at least in the U.S. the government is subject to the First Amendment, and can be voted out of office.

The digital war was started against us long ago. After today, there’s no denying it. The question, which is not as simple as government regulation, is how to escape the death grip of social media oligopolies.

We simply don’t understand the unintended consequences of allowing our data to be used. Liberal biased Facebook, Google, Reddit, LinkedIn and Twitter are nefarious surveillance companies data mining its customers and illegally selling it to the highest bidder. Facebook is free because you, the user, are the product they sell. Why would you be a member of them or Twitter, YouTube, etc. Once you lose your privacy and identity, it is almost impossible to get it back. Be safe, be smart, and drop these from your life while you still have it. And they are ending access to users who do not fit their liberal agenda. They should be fined for their discriminating behavior. And none of these companies should be allowed to stifle free speech. I would only support eliminating users who are advertising, or promoting violence, or illegal activities. Social media is a cesspool where political correctness and righteous indignation thrives.

I understand why POTUS uses Twitter to get his messages out to circumvent the FAKE NEWS (left wing) media. I personally do not use Facebook or Twitter simply because both are political organisations working feverishly to promote their Trump Derangement Syndrome and are run by billionaires Dorsey and Zuckerberg who are devout Left Wingers milking the American public of every cent they can! It’s all about the money folks.